Gerrit Schulte (7 January 1916 – 26 February 1992) was a Dutch professional track bicycle racer. Between 1940 and 1960 he won 19 six-day races out of 73 starts and was one of the dominant Six days racers of his time. Schulte was as well successful in track pursuit, becoming national champion ten times, European champion twice and world champion once, in 1948, when he beat Fausto Coppi in the final. He was also successful as a road race cyclists, becoming national champion three times and winning a stage in the 1938 Tour de France. Since 1955, the Gerrit Schulte Trophy has been awarded by the national federation to the best professional rider in the Netherlands.[1][2]

Schulte competed at the 1936 Summer Olympics in the individual and team road races, but did not finish. Next year he turned professional.[1]

In the 1938 Tour de France, Schulte joined as a member of the Dutch team. He won the third stage, and abandoned the race in the eighth stage.[3] After that, he went to Paris, and won 10.000 francs in a criterium. His team mate Theo Middelkamp did finish the 1938 Tour, and also won a stage, but Middelkamp only won 8.000 francs during the Tour. They both decided to never return to the Tour, because in other races they could win more money.[4]

Since 1955, every year the Gerrit Schulte Trophy is awarded by the national federation to the best professional rider in the Netherlands, and Schulte himself has won it once in 1958. After retiring from competitions he worked as a cycling coach and managed the restaurant in De Vliert, the football stadium of his home town Den Bosch.[1] 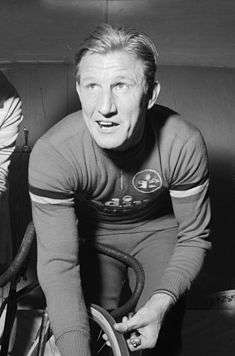 Schulte before his last race in Antwerpen in March 1960