This article is about the jersey worn by the world champion in cycling. For the Astros uniform worn in the 1970s, see Houston Astros. 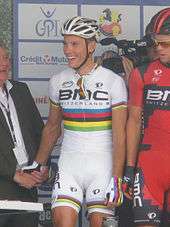 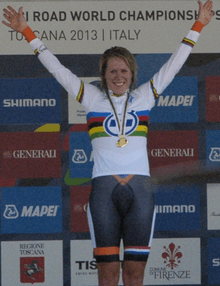 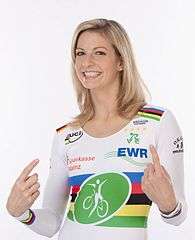 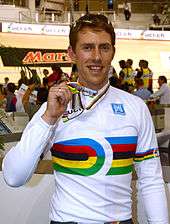 The rainbow jersey is the distinctive jersey worn by the reigning world champion in a bicycle racing discipline, since 1927. The jersey is predominantly white with five horizontal bands in the UCI colours around the chest. From the bottom up the colours are: green, yellow, black, red and blue; the same colours that appear in the rings on the Olympic flag. The tradition is applied to all disciplines, including road racing, track racing, cyclo-cross, BMX, Trials and the disciplines within mountain biking. The jersey is produced by Santini SMS since 1994.[1]

A world champion must wear the jersey when competing in the same discipline, category and speciality for which the title was won. For example, the world road race champion would wear the garment while competing in stage races (except for time trial stages) and one-day races, but would not be entitled to wear it during time trials. Similarly, on the track, the world individual pursuit champion would only wear the jersey when competing in other individual pursuit events.[2] In team events, such as the team pursuit, each member of the team must wear the rainbow jersey, but – again – would not wear it while racing in, say, points races or other track disciplines.

The rainbow jersey helps make a world champion easier to spot for spectators, but it also has the effect of making the title-holder more visible to other competitors, particularly in road racing situations. This can be a disadvantage as it makes it more difficult for the world champion to launch an attack, while other riders will quickly seek to take advantage if they notice the rainbow jersey crashes or suffers a mechanical or other problem. There is also reduced space for sponsors' logos on the world champion's jerseys; however, the increased media coverage of a reigning world champion is thought to offset the effects of the smaller logo space.

Failure to wear the rainbow jersey where required carries a penalty of 2500 to 5000 Swiss francs.[3]

After the end of a rider's championship year, they are eligible to wear piping in the same rainbow pattern on the collar and cuffs of their jersey. They retain this right for the remainder of their career.

If the holder of a rainbow jersey becomes leader of a multi-stage race (such as the Tour de France) then the leader's jersey (Yellow jersey) for that race takes precedence. Similarly, the leader's jerseys for UCI World Cup series also take precedence over the rainbow jersey, although, in 2006, Road Race World Champion Tom Boonen at one point was the leader of the Road Racing World Cup, and he, as well as his sponsor and the organizers of the race he was competing in at that time (Gent–Wevelgem) wanted him to continue wearing the rainbow jersey. A compromise was reached and Boonen wore a jersey which was a combination of the Rainbow jersey and the UCI World Cup jersey.[4]

The current world champions in each discipline, allowed to wear the rainbow jersey are (excluding youth and veteran championships):

Curse of the rainbow jersey

Similar to the Sports Illustrated cover jinx, the curse of the rainbow jersey is a popular term to refer to the phenomenon where cyclists who have become World Champion often suffer from poor luck the next year – though, in some cases, the 'bad luck' was brought on by their own actions.

Tom Simpson of the United Kingdom won the world title in 1965. During the following winter (Jan/Feb 1966) he broke his leg skiing thus missing out on his most lucrative benefits from wearing the rainbow jersey.

Other notable 'victims' of the curse include the 1970 world champion Jean-Pierre Monseré who died wearing the rainbow jersey in March 1971.

The 1981 winner, Freddy Maertens of Belgium, also won the Green Jersey in the 1981 Tour De France, but in 1982 won no races, and only won a further two races in his professional cycling career.

The 1987 winner, Irishman Stephen Roche, who had won the Tour de France and Giro d'Italia in the same season, had a disastrous following year, missing nearly the entire season with a knee injury.

The 1990 winner, Rudy Dhaenens of Belgium, had no results in 1991, and was forced to retire shortly after with heart problems. He was killed in a car accident six years later at the age of 36.

The 1994 winner, Luc Leblanc of France had an injury plagued following season with very poor results, winning only one small race, before bouncing back in 1996.

The 2003 winner, Spaniard Igor Astarloa, switched to the French team Cofidis for the 2004 season which almost immediately suspended itself from racing due to doping allegations against several members of the team. In response to this, Astarloa switched first to the Lampre team, and then the Barloworld team. He has had a very quiet career since his 2003 victory.

The 2004 World Road Champion Óscar Freire was in good form throughout the spring, but developed a saddle sore mid-season that ended his hopes for a second consecutive title on home turf in Spain.

In August 2004 British professional cyclist David Millar was suspended for two years by British Cycling, stripped of his 2003 World Time Trial Championship jersey, and given a fine, after confessing to the use of EPO in 2001 and 2003.

On 24 September 2006, Italian Paolo Bettini won the rainbow jersey in the World Road Race Championship in Salzburg, Austria.[5] Eight days later on 2 October his older brother Sauro died when his car struck an obstacle and overturned into a ditch.[6] He also had a few accidents in the beginning of 2007 season (Tirreno–Adriatico) and technical problems (in E3 Prijs Vlaanderen his chain snapped[7]). Bettini would manage to defend his world championship title in 2007, though.

On November 26, 2006, while wearing the rainbow jersey of World Madison Champion, Isaac Gálvez died during the Six Days of Ghent, following a horrific crash into the upper barrier surrounding the indoor track.[8]

The 2008 World Road Champion Alessandro Ballan was diagnosed with Cytomegalovirus near the beginning of the 2009 season, and as a consequence missed the spring's classics and the Giro d'Italia, his home tour. As a result, he was in poor form for that year's Tour de France, and only made a proper appearance once, on stage 19 when he unsuccessfully broke away near the end of the stage.

2012 World Road Champion Philippe Gilbert had a poor season wearing the jersey. He won only one stage in the stripes.

2013 World Road Champion Rui Costa was diagnosed with Bronchitis during 2014 Tour de France and had to rest for most of the August.

In 2015 an article by epidemiologist Thomas Perneger examining the curse was published in The BMJ. The study was based on statistical analysis of the results of World Road Champions and winners of the Giro di Lombardia (which was used as a comparison) in the riders' winning seasons and for the two years afterwards (to enable comparison of results before, during and after the supposed curse was in effect). The patterns of data were compared to four statistical models - the "spotlight effect", based on the theory that the apparent curse is due to increased public attention on the World Champion rather than a decline in success, the "marked man" hypothesis which stipulates that the current wearer of the jersey is more closely marked by rivals during their year as champion, the "regression to the mean" model which supposes that random variation in success rates will mean that a highly successful season for a rider is likely to be followed by less successful years, and a model combining the last two theories. The study found that the regression to the mean model was the one that fit the data best, for winners of both the World Championship and Il Lombardia, concluding that the curse probably does not exist. The author related the idea of the curse to medical professionals conflating correlation with causation when considering the effect of treatment on a patient.[9]

Exceptions to the curse

2011 world champion Mark Cavendish won 13 stages, the Kuurne–Brussels–Kuurne and the GC at the Ster ZLM Toer.

Belgian Tom Boonen won the world road race in 2005 then rode the jersey to victory in 12 individual stages, the Tour of Flanders and the overall at the Tour of Qatar.

In the past, each discipline had its own variation of the jersey.[10] Since the 2016 Cyclo-cross Worlds, the 'classic' jersey without symbols (previously reserved for the road race and paracycling road race) was assigned to all disciplines.[11]