Taylor Phinney (born June 27, 1990) is an American racing cyclist and rides professionally for UCI ProTeam BMC Racing Team.[3] Phinney specializes in time trials as well as the individual pursuit on the track.

In 2007 at the age of 16, Phinney began racing on Team Slipstream's junior squad. Slipstream team manager Jonathan Vaughters signed Phinney to the team before he had competed in a race, having heard word-of-mouth reports about Phinney's ability on group rides in Boulder. It was at this time that Phinney was introduced to track cycling.[5] In August 2007, he won the World Junior Championships time trial title. Since then, Phinney has competed in National, World Cup and World Championship events for track cycling. Phinney finished seventh in the individual pursuit at the 2008 Summer Olympics. Later that year, at the U.S. National Track Championships, he won gold medals in the elite one kilometer time trial, individual pursuit and team pursuit races.[6]

On September 24, 2008, Lance Armstrong announced that Phinney had made the under-23 team, which was organized by the group that managed Armstrong's Team RadioShack, Trek-Livestrong.[7] On March 26, 2009, Phinney won the individual pursuit at the 2009 UCI Track Cycling World Championships and, again, at the 2010 UCI Track Cycling World Championships on March 25, 2010. Phinney then switched his focus to the road, winning the Paris–Roubaix Espoirs, the Olympia's Tour overall, in addition to the first four stages and time trials in Tour de l'Avenir and Tour of Utah. 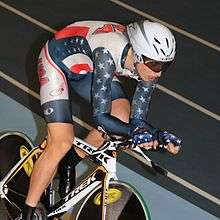 Phinney during the 2010 UCI Track World Championships, where he won a gold medal for the individual pursuit

On July 29, 2010, it was announced that Phinney and teammates Jesse Sergent and Clinton Avery would ride in the Tour of Denmark for Team RadioShack,[8] riding as stagiaires. 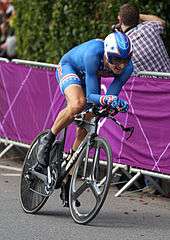 Phinney competing in the 2012 Olympics time trial in London

On September 22, 2010, the BMC Racing Team announced that Phinney would become part of BMC in 2011, joining a team that included Cadel Evans, George Hincapie and Alessandro Ballan.[9] The highlight of Phinney's first season with BMC was a fourth-place finish in the Eneco Tour.

Phinney started the 2012 season by helping his team win the Giro del Trentino's team time trial, where he wore the leader's jersey for a day.[10] His early target for the 2012 season was the opening stage of the Giro d'Italia, which he duly won to wear the leader's jersey, the maglia rosa, becoming just the third American to do so following Andy Hampsten in 1988 and Christian Vande Velde in 2008. Phinney then switched his focus to the Olympic Games, targeting the road race and time trial, where he finished fourth in each event. He would go on to win the stage-seven individual time trial of the USA Pro Cycling Challenge. Phinney participated in the 2012 UCI World Road Race Championships. He was part of the six-man BMC team that took silver in the team time trial. Phinney also finished second to Tony Martin in the individual event, missing out on becoming World Champion by five seconds.

Amidst the turmoil of the Lance Armstrong-USADA affair, Phinney sent a tweet congratulating his teammate Steve Cummings for his stage win at the Tour of Beijing, saying “He [Cummings], like me, follows his own personal policy of no caffeine pills and no painkillers. Purest of the pure!”[11] Phinney later explained his comment by stating that although legal, caffeine pills and mild painkillers were often used in the peloton during races, and that some riders even crushed them and mixed them in water bottles. He stated that he was entirely against that practice and doping in general.[11]

On the penultimate, or second-to-last, stage of the 2013 Tirreno–Adriatico, in heavy rain, Phinney found himself well in arrears of the leaders on a tough finishing circuit, which included a climb at Sant'Elpidio a Mare with gradients reaching 27 percent. Around 30 other riders in the group abandoned the race with over 100 kilometers (62 miles) to go, but Phinney rode on alone in the hope of making the time limit, so he could compete in the final day's time trial. Ultimately, Phinney missed the time limit by over ten minutes.

In the early part of the 2014 season, Phinney won the inaugural Dubai Tour after winning the opening time-trial. In May, Phinney won a stage of the Tour of California. With more than 23 kilometers to the finish, Phinney broke away from a reduced peloton and won by 12 seconds. Soon after, Phinney was victorious for a second time at the United States National Time Trial Championships. Two days later, at the United States National Road Race Championships, Phinney suffered a career-threatening crash after sliding into a guard-rail. He was attempting to avoid a motorcycle on the descent of Lookout Mountain in Tennessee. His injuries—a compound fracture to his tibia and severed patellar tendon—required surgery. Phinney never wore his national jersey as he remained out of action for a year, having initially been given a six-to-eight-week recovery period.[4][12][13]

At the end of 2015, Phinney participated in "Thereabouts 2," with Angus Morton, Lachlan Morton and Cameron Wurf.[14] "Thereabouts 2" was an adventure-related cycling trip from Boulder, Colorado to Moab, Utah, while attempting to realize what makes cycling so special: adventure, friendship and a lack of structure.

Phinney spent the early part of the 2016 season recovering from his injuries, making his first race appearance of the year at the Tour du Haut Var in February and subsequently racing in the spring classics before returning from Europe to his native Colorado.[15] In May 2016 Phinney took his third national time trial title in Winston-Salem, North Carolina, beating runner-up Tom Zirbel by over a minute: Phinney expressed satisfaction with the result and his performance, hoping that it would help him secure selection for the 2016 Summer Olympics.[16] He competed at the Olympics, but despite entering the road time trial with hopes of a medal, he finished 22nd, over five minutes behind winner Fabian Cancellara.[17]

In September 2016 Phinney confirmed that he had agreed a two-year deal with Cannondale–Drapac from the 2017 season, with a focus on competing in the classics and aiming to race in the 2017 Tour de France.[18]