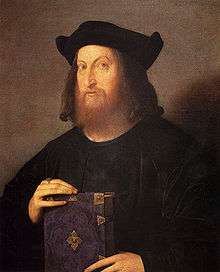 Trissino was born of a patrician family in Vicenza. He was exiled from Venice for political reasons, and traveled to Germany and Lombardy. He eventually came under the protection of Pope Leo X, Pope Clement VII, and Pope Paul III.

He had the advantages of a good humanistic training, studying Greek under Demetrius Chalcondylas at Milan and philosophy under Niccolò Leoniceno at Ferrara. His culture recommended him to the humanist Pope Leo X, who in 1515 sent him to Germany as his nuncio; later on Pope Clement VII showed him special favour, and employed him as ambassador.

In 1532, the Emperor Charles V made Trissino a count palatine. In spite of the banishment from Vicenza pronounced upon him in 1509 because his family had favoured the plans of Maximilian, he was held in high esteem throughout Italy. Wherever he made his home, it was a center for gatherings of scholars, littérateurs, and the most cultured men of the time. His family life was far from happy, apparently through little fault of his own.

In the history of modern European literature Trissino occupies a prominent place because of his tragedy Sophonisba (c. 1515; published 1524).[1] Based on the life of the Carthaginian lady Sophonisba and inspired by ancient tragedies, it was perhaps the first tragedy in early modern times to show deference to the classic rules. It served as an example for European tragedies throughout the 16th century. It was translated into French by Mellin de Saint-Gelais, and was performed with great acclaim in 1556 at the Château de Blois.[2]

A partisan of Aristotelean regularity, Trissino disapproved of the freedom of the chivalrous epic, as written by Ariosto. In his own composition, l'Italia liberata dai Goti (1547–1548), dealing with the campaigns of Belisarius in Italy, he sought to show that it was possible to write in the vernacular an epic in accordance with the classic precepts. The result is a cold and colorless composition. Moreover, as Nicholas Birns points out, the very choice of the Byzantine-Ostrogothic wars of the sixth century as a subject committed Trissino to dealing with barbarian subjects which, as an extreme classicst, he felt little affinity.[3]

In addition, Trissino played a prominent role in the early career of Andrea Palladio, which developed into a long and close friendship between the two men. Trissino first took Palladio under his wing after becoming acquainted with him while building his villa in Cricoli.[4]

Trissino died in Rome in December 1550.

An edition of his collected works was published at Verona in 1729.

His endeavors in the field of linguistics received lively reactions in the literary world of the time. Following the lead of Dante, he advocated the enrichment of the Italian language, and espoused in his Castellano (1529) the theory that the language is a courtly one made up of contributions from the refined centers in Italy; instead of being fundamentally of Tuscan origin. His theory was supported by the publication, also in 1529, of his translation of Dante's De vulgari eloquentia, which Trissino had saved from oblivion.

The idea was taken up for "j" and "v", which brought to the modern distinction U vs. V and I vs. J, which eventually caught up also for other European languages before being partly abandoned in contemporary Italian, which often spells the sound [j] with an I.

Because he applied his system to his publications of the Ɛpistola, the Sofonisba and Il Castellano, his research also serves as a valuable source for the differences between the Tuscan pronunciation and that of the courtly language, which he advocated as an enrichment of the Italian language.

I Simillimi (1548) which is a version of the Menæchmi of Plautus, I Ritratti (1524) which is a composite portrait of feminine beauty, and the Poetica, which contains his summing up of the Aristotelean principles of literary composition, comprise the rest of his important writings.