This article is about the Spanish city, capital of the province of Girona. For other uses, see Girona (disambiguation).

Girona (English /dʒiˈroʊnə/, Catalan: [ʒiˈɾonə], Spanish: Gerona [xeˈɾona]; French: Gérone) is a city in the northeast of the Autonomous Community of Catalonia in Spain, at the confluence of the rivers Ter, Onyar, Galligants, and Güell and has an official population of 97,586 as of January 2015. It is the capital of the province of the same name and of the comarca of the Gironès. It is located 99 km (62 mi) northeast of Barcelona. Girona is one of the major Catalan cities.

The first historical inhabitants in the region were Iberians; Girona is the ancient Gerunda, a city of the Ausetani. Later, the Romans built a citadel there, which was given the name of Gerunda. The Visigoths ruled in Girona until it was conquered by the Moors in 715. Finally, Charlemagne reconquered it in 785 and made it one of the fourteen original counties of Catalonia. It was wrested temporarily from the Moors, who recaptured it in 793. From this time until the moors were finally driven out, 1015, the city repeatedly changed hands and was sacked several times by the moors (in 827, 842, 845, 935, 982). Wilfred the Hairy incorporated Girona into the County of Barcelona in 878. Alfonso I of Aragón declared Girona a city in the 11th century. The ancient county later became a duchy (1351) when King Pero III of Aragon gave the title of Duke to his first-born son, John. In 1414, King Ferrando I in turn gave the title of prince of Girona to his first-born son, Alfonso. The title is currently carried by Princess Leonor of Asturias, the second since the 16th century to do so.

The 12th century saw the Jewish community of Girona flourish, having one of the most important Kabbalistic schools in Europe. The Rabbi of Girona, Moshe ben Nahman Gerondi (better known as Nahmanides or Ramban) was appointed Great Rabbi of Catalonia. The presence of the Jewish community of Girona came to an end in 1492, when the Catholic Monarchs expelled all the Jews from Catalonia. Today, the Jewish ghetto or Call is one of the best preserved in Europe and is a major tourist attraction. On the north side of the old city is the Montjuic (or hill of the Jews in medieval Catalan), where an important religious cemetery was located.

Girona has undergone twenty-five sieges and been captured seven times. It was besieged by the French royal armies under Charles de Monchy d'Hocquincourt in 1653, under Bernardin Gigault de Bellefonds in 1684, and twice in 1694 under Anne Jules de Noailles. In May 1809, it was besieged by 35,000 French Napoleonic troops under Vergier, Augereau and St. Cyr, and held out obstinately under the leadership of Alvarez until disease and famine compelled it to capitulate on the 12th of December. Finally, the French conquered the city in 1809, after 7 months of siege. Girona was center of the Ter department during the French rule, which lasted from 1809 to 1813. The defensive city walls were demolished at the end of the 19th century to allow for the expansion of the city. In recent years, the missing parts of the city walls on the eastern side of the city have been reconstructed. Called the Passeig de la Muralla it now forms a tourist route around the old city.

In the Köppen climate classification, Girona has a humid subtropical climate (Cfa), with cool winters and hot summers. In winter, temperatures can drop to below −3 °C (27 °F). In summer, temperatures often soar to 30–35 °C (86–95 °F). Although rainfall is evenly spread throughout the year, it is more common in spring (April-May) and autumn (September-November). The driest month is July. Thunderstorms often occur.

Girona is a popular destination for tourists and Barcelona day-trippers - the train journey from Barcelona Sants to Girona takes approximately forty minutes on express trains. The old town stands on the steep hill of the Capuchins to the east of the river Onyar, while the more modern section stands on the plains to the west. 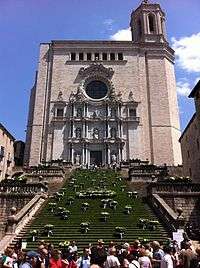 The ancient cathedral, which stood on the site of the present one, was used by the Moors as a mosque, and after their final expulsion was either entirely remodelled or rebuilt. The present edifice is one of the most important monuments of the school of the Majorcan architect Jaume Fabre and an excellent example of Catalan Gothic architecture. It is approached by eighty-six steps. An aisle and chapels surround the choir, which opens by three arches into the nave, of which the pointed stone vault is the widest in Christendom (22 meters). Among its interior decorations is a retable which is the work of the Valencian silversmith Pere Bernec. It is divided into three tiers of statuettes and reliefs, framed in canopied niches of cast and hammered silver. A gold and silver altar-frontal was carried off by the French in 1809. The cathedral contains the tombs of Ramon Berenger and his wife.

The old fortifications are another popular sight. Historically, these have played a vital role in protecting Girona from invaders for hundreds of years. The city wall of the old town was an important military construction built in Roman times in the 1st century BC. It was thoroughly rebuilt under the reign of Peter III the Ceremonious in the second half of the 14th century. The Roman wall was used as a foundation. At the start of the 16th century, the wall was absorbed in the city. The walled precinct lost its military value. Bit by bit, the wall was degrading, as parts were gradually altered from the inside and the outside. The walls and lookout towers that make up these fortifications are split in two - a small section in the north of the old town and a much larger section in the south. It is possible to walk the entire length of the walls and climb the towers, where visitors can enjoy panoramic views of Girona and the surrounding countryside. 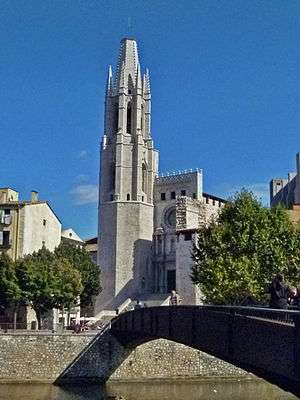 The Collegiate Church of Sant Feliu, as seen from the river Onyar.

The Collegiate Church of Sant Feliu is noteworthy from an architectural point of view. Its style is 14th-century Gothic, the façade dating from the 18th, and it is one of the few Spanish churches which possesses a genuine spire. It contains, besides the sepulchre of its patron and the tomb of the valiant Álvarez, a chapel dedicated to St. Narcissus, who according to tradition was one of the early bishops of the see.[4] 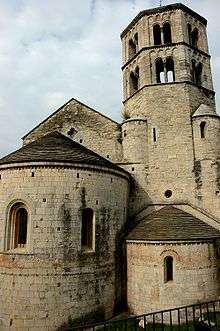 The Benedictine church of Sant Pere de Galligants is in early Romanesque style. From the same period is the Monastery of St. Daniel. 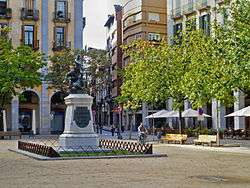 The Plaça de la Independència, which refers to the War of Spanish Independence against Napoleon Bonaparte, is one of the best known and most frequented places in Girona. Located in Mercadal district in the city center, is also known as Plaça de Sant Agustí, because formerly the Convent of Sant Agustí had been raised there.

The interest of the square lies 19th-century style, despite it is surrounded by austere identical neoclassical buildings with porches dedicated to the defenders of the city of Girona during the sieges of 1808 and 1809.

However, the symmetrical proportions of square corresponds more to current interventions than its architectural past. The municipal architect Martí Sureda was the first who thought up an arcaded square with loops closed and neoclassical, with some buildings having the same aesthetic proportions. The urbanization of the area only followed in part their schemes. The construction of the first theaters in this city, broke down the idea of Martí Sureda. Until the 18th century, what that architect had imagined could not be completed. This part of the city in Noucentisme style is a romantic and timeless creation, from one century to another, nowadays captivates inhabitants and visitors. Today has great activity due to the gradual opening of cafes and restaurants. On this, some business are well known for its history like the Café Royal, Cinema Albéniz and Casa Marieta[5]

Characteristic of Girona are the picturesque houses overlooking the river Onyar. These were built over many years and give the flavour of a small Mediterranean city. The façades are painted according to a palette created by Enric Ansesa, James J. Faixó and the architects Fuses and J. Viader.

One of these houses (at Ballesteries 29, Girona) is Casa Masó, the birthplace of the architect Rafael Masó and an example of Noucentisme in Girona. Since 2006 it has been the headquarters of the Fundació Rafael Maso. The river façade can be recognised by its unique white color.

Although most traces of Girona's rich Jewish history were wiped out when the Jews were expelled from Spain (see Spanish expulsion), a few remain. On Carrer de Sant Llorenc, a rectangular indentation that once held a mezuzah can be seen on the doorway of an old building. Farther along is the Centre Bonastruc ça Porta and the Catalan Jewish Museum. The Bonastruc ça Porta project started in the 1970s, when it became fashionable to renovate properties in the old town.

The city has a number of relevant Art Nouveau buildings including the Farinera Teixidor by Rafael Masó.

During the professional cycling season, various non-European pro cyclists have called Girona home, as illustrated in the book[6] by Michael Barry, written during his time with the US Postal Service cycling team. Between races, cyclists do their training rides outside the city, which provides excellent training terrain.

In the Spring of 1997, Marty Jemison, Tyler Hamilton and George Hincapie moved to Girona as teammates of the US Postal Service Professional Cycling Team. This was the first year that American cyclists started living in Girona and meeting for training rides at the Pont de Pedra. Later, other well-known professional cyclists such as Lance Armstrong came to live in the city.

Football is also widely popular. The local Football club is Girona FC, currently playing in the Spanish Segunda División after promotion in the 2007-08 season in the playoffs. Its stadium is Estadi Montilivi.

The city has a roller hockey team, GEiEG, one of the most important in Spain, which competes in the main League OK Liga.

The city is the home of the Universitat de Girona. 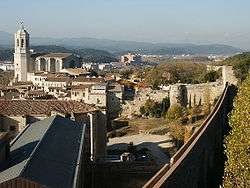 The town is on the Autopista AP-7 and N-II. The city is also the hub of the local road network with routes to the coast and inland towards the Pyrenees.

The city has a comprehensive urban bus service operated by private companies. There are also services to the other towns in the Girona province and long distance buses.

Girona is served at its new railway station to the west of the Old Town. There are conventional trains from Barcelona to Portbou and the French border.

The journey time to Barcelona is approximately 1 hour 35 minutes on the stopping "Regional" trains, 1 hour and 15 minutes by conventional train ("Media Distancia") or 37 minutes on the AVE. Madrid is reached in 3 hours 45 mins.

The town's airport, Girona-Costa Brava, is 10 kilometres (6 miles) south of the town centre. It grew tremendously principally as a result of Ryanair choosing it as one of their European hubs, but then shrunk again after they relocated most of the flights to Barcelona El Prat.

Girona Airport is a 15-minute bus ride from the bus terminal and train station in Girona city and an hour from Barcelona centre, 92 km (57 mi) to the south. The bus stops in the centre of Barcelona, at the Estació d'Autobusos Barcelona Nord, Barcelona's main bus terminal.

Most low cost airlines mention "Barcelona" in their descriptions of Girona airport.

Girona is twinned with: