Givat HaMatos (Hebrew: גבעת המטוס‎‎) is a settlement which hosted Ethiopian Jewish and Russian immigrants in caravans.[1] It encompasses an area of 170 dunams. It is bordered by Talpiot in the north, Gilo in the south, and Beit Safafa in the west. Israel has approved to build a new Israeli settlement there.[2] 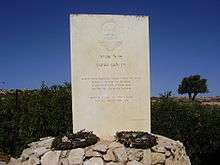 Givat HaMatos is Hebrew for "Airplane Hill." The site received its name after a small two-engine Israel Air Force plane crashed there on June 6, 1967, the second day of the Six-Day War after being hit by Jordanian anti-aircraft artillery. The pilot, Lt. Dan Givon, was killed.[3] 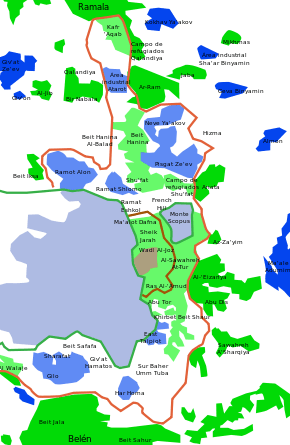 Map of East Jerusalem in 2007. The Arab areas are coloured green while the Jewish areas are blue.

The caravans were built on a hill in 1991 to house a large influx of Ethiopian Jews airlifted to Israel. According to a Hebrew University political scientist, Givat Hamatos was "an empty hillside, cold and windswept in the winter, in the far south of the municipal area. It was close to... Bethlehem and Beit Jallah, and included a minefield left over from a previous war".[1] Amidar, a government housing company, also placed homeless Israeli families in Givat HaMatos until alternate housing could be found.[4]

In 2005, a 4-stage development project was unveiled for the neighborhood. The plans included a panoramic promenade, hotels, cafes, office buildings and commercial space.[4]

In 2007, dozens of immigrant families were still living there in caravans and various aid organizations were working to alleviate the financial distress of families that had not been successfully absorbed in Israeli society.

In December 2012, the plan was to build 2,610 housing units in Givat Hamatos in the first stage. The full plan included around 800 units for Palestinians in nearby Beit Safafa.[5] Sources in the Jerusalem municipality said that half of the construction in Givat Hamatos was for the Arabs in Beit Safafa.[6]

On 2 October 2014, the European Union condemned new settlement expansion in Givat HaMatos.[7] United States criticised the housing development too.[8] According to Akiva Eldar, the divide between Betlehem and East Jerusalem will now be completed and "a significant diplomatic arrangement" regarding Sharafat and Beit Safafa, two Arab neighborhoods in Jerusalem, will be impossible.[9]