بيت جالا ‎‎) is a Palestinian Christian town in the Bethlehem Governorate of the West Bank. Beit Jala is located 10 km south of Jerusalem, on the western side of the Hebron road, opposite Bethlehem, at 825 meters (2,707 ft) altitude. In 2007, Beit Jala had 11,758 inhabitants according to the Palestinian Central Bureau of Statistics. About 75% of the population were Christians (mostly Greek Orthodox) and about 25% Muslims. 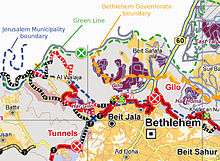 Map of the Beit Jala region

A crypt, dating to the 5th or 6th century C.E. was located under the Church of St. Nicolas in Beit Jala. In the Crusader era, the village was called Apezala, and the Church was possibly rebuild then.[4]

In 1517, the village was included in the Ottoman empire with the rest of Palestine. In this century, Beit Jala was a large village of Christian and Muslim peasants and it had over ten elders (akabir) who functioned as leaders, with each religious group having separate sets of leaders.[5] Rare for a single village, it and nearby Bethlehem, served as its own separate jurisdiction instead of being grouped with other villages into nahiya.[6] In April 1531, when an Ottoman official went to Beit Jala to register the village's grapevines for tax purposes, the residents refused to seriously answer his questions and mocked the authority of the Ottoman sultan, marking a notable episode of initial local resistance to the Ottoman taxation methods and procedures. By the end of the 16th century, Beit Jala was almost entirely inhabited by Christians. Beit Jala's size rendered it similar to that of a town, with the village being subdivided into four quarters.[7] The village produced more wheat and barley than surrounding localities and like other villages south of Jerusalem, grape cultivation was greater than olive cultivation. Beit Jala was taxed on these agricultural products as well as figs, honeybees, and goats. It contained one of the six olive presses in the subdistrict of Jerusalem in the 16th century. Despite its large size, Beit Jala was relatively poorer than other villages in the subdistrict.[8]

In the 1596 tax-records, it appeared as Bayt Jala, located in the Nahiya of Jabal Quds of the Liwa of Al-Quds. The population was 245 households; 6 Muslims and 239 Christians. They paid a fixed tax-rate of 33,3% on agricultural products, which included wheat, barley, olive trees, vineyards, fruit trees, occasional revenues, goats and beehives; a total of 30000 Akçe.[9]

In 1697 Maundrell passed Beit Jala, and noted that: “no Turk can live in it above two years. By virtue of this report, whether true or false, the Christians keep the Village to themselves without molestation; no Turk being willing to stake his life experimenting the truth of it.”[10]

Beit Jala's inhabitants participated in the 1834 peasants' revolt in Palestine against Ibrahim Pasha, the Egyptian governor of Syria. Beit Jala's residents were believed to have taken part in the looting of Egyptian property and on 31 May, Egyptian troops assaulted the village. Ibrahim Pasha put a stop to the attack, but at least 33 men and women were killed in the attack. In addition, the village's livestock was seized. The attack on Beit Jala prompted rebels from the Ta'amira tribe, a local Bedouin tribe, to enter into Bethlehem to help bolster its defense.[11]

In 1838, there were roughly 1,000 Greek Orthodox and 200 Catholic Christians living in Beit Jala, but by the mid-19th century, there were 10 Catholics. The Latin Patriarchate founded its first parish in Palestine in Beit Jala in 1853.[12] The establishment of the parish faced fierce resistance by the Greek Orthodox Patriarchate and the inhabitants of Beit Jala, leading to several skirmishes and official complaints to the Ottoman authorities by both sides.[13] A Latin church was built in Beit Jala and inaugurated on 18 April 1858.[14] The Jerusalem Society, a Protestant movement struggled to maintain a presence in Beit Jala in the late 19th century. When a clash between Orthodox and Protestant residents ended with the death of an Orthodox girl, the village's Protestant community was evacuated to al-Karak in Transjordan for six months until compensation was paid to family of the slain girl.[15] In 1866, the Russian ambassador to the Ottoman Empire purchased land in Beit Jala and built a girls' school, the first Russian school to be built in Palestine. It had 60 pupils by 1880 and was assigned a Russian principal. In 1886, it became a teachers' training school and was under the administration of the Palestinian Orthodox Imperial Society.[16]

An Ottoman village list of about 1870 counted 234 houses and a population of 874 "Latins", though the population count included men only.[17] In 1883, the Palestine Exploration Fund's Survey of Western Palestine (SWP) described Beit Jala as: "A large and flourishing village of white well-built stone houses, on the slope of a steep hill. The water supply is artificial, with a well in the valley below. The population is said by Pere Lievin to amount to 3,000, of whom 420 are Catholics, and the rest Orthodox Greeks. There is a Greek and a Latin church in the village. There are remarkably fine groves of olives round and beneath the village, and the hill is covered with vineyards which belong to the place."[18]

The Mennonite Central Committee (MCC) began relief operations for refugees in the West Bank in 1950. They also worked with Palestinians who had retained their houses and so were not technically refugees, but who had lost their land or means of making a living because of the war. As part of this relief, the MCC founded a school in Beit Jala which was still in operation as of 1979.[25]

In 1952, following an Israel Defense Forces reprisal raid in Beit Jala killing seven civilians; one man, two women and three children. A complaint was lodged that Israel had violated the General Armistice agreement. The United Nations Truce Supervision Organisation issued a condemnation of Israel for breaching the agreement.[26]

Since the Six-Day War in 1967, Beit Jala has been under Israeli occupation.

Control of the town was assumed by the Palestinian Authority following the 1993 Oslo Accords.

During the Second Intifada, militants from the Fatah-affiliated Tanzim group used Beit Jala as a base for launching sniper and mortar attacks[27] on the Israeli settlement of Gilo.[28] Gilo is located on a hilltop across from Beit Jala, partially built on the lands of Beit Jala, Beit Safafa and Sharafat.[29] The Israeli government built a concrete barrier and installed bulletproof windows in homes and schools facing Beit Jala.[30]

In several instances, militants were reported to have used the houses of some Palestinian Christian residents to fire on Israeli targets in Gilo. According to one Fatah fighter named Abu Atef, fighters were initially welcomed by residents, but after their homes were attacked by Israeli retaliatory fire and several fighters and residents were killed, they no longer tolerated the militants' presence.[31] According to John Bunzl, the Israeli press used the incident to suggest there was a Christian-Muslim conflict in the incidents, with the former trying to prevent an attack until the Muslims forced them to surrender. Numerous statements taken from Christian residents appear to refute this.[32] In August 2001, the Israeli Army occupied the northeastern corner of Beit Jala, declaring that it would only leave when the gunfire on Gilo stopped.[33] Two days later, the troops withdrew.[34] Palestinian militants subsequently increased their attacks, adding mortars and heavy machine guns. According to Time Magazine, the Palestinian militants were not locals, but took up positions in Beit Jala due to its proximity to Gilo.[35] In August 2010, after a long period of calm, the concrete barrier built to protect Gilo was removed.[36]

The Israel barrier in the West Bank will separate over 50 Beit Jalla families from their land; although Israel says it is a vital security measure.[37] Palestinians believe the ultimate aim of the barrier is a land grab as its built inside the occupied West Bank on land Palestinians want for a future independent state. Local church leaders - Latin Catholic and Greek Orthodox - have been involved in the campaign to prevent the construction of the barrier.[37]

This town's Christian inhabitants are made up of five Christian tribes that trace their origins as Aramaic-speaking people who lived in that area near Bethlehem prior to the Muslim conquest in 634. At the 1931 census of Palestine the population of Beit Jala was 2,732. This included 196 Muslims, 2,532 Christians, and one Jew.[39] In 1947, Beit Jala had a population of approximately 3,700. In 1967, according to a census conducted by the Israeli Army Command, the population was 6,041.[40] The population in 2007 was 11,758 according to the Palestinian Central Bureau of Statistics.[2]

Cremisan Cellars, located in the Cremisan monastery, is an important local winemaker. The winery has operated since the establishment of the monastery in the 19th century. Modern equipment was introduced in 1997.[41] Beit Jala was once famous for its pork, olive oil, apricots and stone masonry.[42] Other economic branches are tobacco, textiles, agriculture and pharmaceuticals. The Beit Jala Pharmaceutical Manufacturing Company (formerly Jordan Chemical Laboratory) was established in 1958 to manufacture generic drug pharmaceutical products for the local market.[43]

The West Bank Barrier is being extended to encircle the area, splitting the monastery, whiuch would end up on the Israeli side, from the sister Salesian convent, and making access to this recreational area for Beit Jala residents very difficult. 57 Christian families are slated to lose their agricultural property.[44]

Beit Jala has a government-run 113-bed hospital, and a 77-bed privately run specialized surgery hospital operated by the Arab Society for Rehabilitation. Primary health care is provided by the Palestinian Authority Ministry of Health. In addition, there are many charities, medical institutions and private health clinics.[45] Societies for the disabled in Beit Jala include the Bethlehem Arab Society,[46] Lifegate Rehabilitation[47] and House Jemima, a Dutch-founded home and daycare-center for children with mental disabilities.[48]

Beit Jala is home to educational institutions run by a variety of Christian denominations, including the Arab Orthodox Benevolent Society. A Russian Orthodox school was established in 1866. The Latin Patriarchate Seminary, which supervises religious liturgical education in the Jerusalem Patriarchate, moved to Beit Jala in 1936.

The Evangelical Lutheran Church in Jordan and the Holy Land (ELCJHL) has a congregation in Beit Jala.[49] The denomination also runs the Talitha Kumi School in Beit Jala, which was founded by Lutheran deaconesses in the 19th century and relocated in Beit Jala in 1961.[50] The school has developed an environmental education program and operates the only bird-ringing station in the Palestinian sector. The school also runs a guesthouse.[50]

The Beit Jala skyline is dominated by several churches, among them the Church of the Virgin Mary, the Church of St. Michael, and the Church of Saint Nicholas. According to tradition, St. Nicholas spent four years in a cave where the Church is built upon it.[51] These three churches belong to the Greek Orthodox Church. The Latin Church of Annunciation is the Catholic church built in 1850.

The Syrian Orthodox Church runs the Mar Afram school in Beit Jala. Since 2007 Mar Afram has offered classes in Aramaic (more specifically, the Syriac dialect) to its students, which are taught by elderly residents of the town who still speak the waning language fluently. A similar program is run for Maronite children in the Arab Christian village of Jish in northern Israel.[52]

In the 2005 municipal election, six seats went to the United Beit Jala list (Fatah and Palestinian People's Party), five seats went to Sons of the Land (PFLP and independents), one seat went to Independent Beit Jala Group and one candidate was elected as an independent. The most popular candidate was Raji George Jadallah Zeidan of United Jala with 2,892 votes, followed by Nadir Antoun Issa Abu Amsha of Sons of the Land with 1764 votes.[53]

The Beit Jala Lions is a rugby club active in Beit Jala since 2007. Hailed as the first all-Palestinian rugby team in history, the team is made up almost exclusively of residents of Beit Jala.[54]