The Glass–Steagall Act describes four provisions of the U.S. Banking Act of 1933 that limited securities, activities, and affiliations within commercial banks and securities firms.[1]

By that time, many commentators argued Glass–Steagall was already "dead."[6] Most notably, Citibank's 1998 affiliation with Salomon Smith Barney, one of the largest US securities firms, was permitted under the Federal Reserve Board's then existing interpretation of the Glass–Steagall Act.[7] President Bill Clinton publicly declared "the Glass–Steagall law is no longer appropriate."[8]

Many commentators have stated that the GLBA's repeal of the affiliation restrictions of the Glass–Steagall Act was an important cause of the financial crisis of 2007–08.[9][10] Economists at the Federal Reserve, such as Ben Bernanke, have argued that the activities linked to the financial crisis were not prohibited (or, in most cases, even regulated) by the Glass–Steagall Act.[11][12][13] 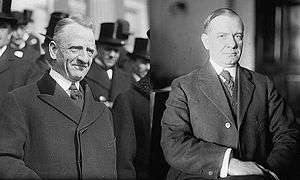 Sen. Carter Glass (D–Va.) and Rep. Henry B. Steagall (D–Ala.-3), the co-sponsors of the Glass–Steagall Act.

The sponsors of both the Banking Act of 1933 and the Glass–Steagall Act of 1932 were southern Democrats: Senator Carter Glass of Virginia (who in 1932 had been in the House, Secretary of the Treasury, or in the Senate, for the preceding 30 years), and Representative Henry B. Steagall of Alabama (who had been in the House for the preceding 17 years).

Between 1930 and 1932 Senator Carter Glass (D-VA) introduced several versions of a bill (known in each version as the Glass bill) to regulate or prohibit the combination of commercial and investment banking and to establish other reforms (except deposit insurance) similar to the final provisions of the 1933 Banking Act.[14] On June 16, 1933, President Roosevelt signed the bill into law. Glass originally introduced his banking reform bill in January 1932. It received extensive critiques and comments from bankers, economists, and the Federal Reserve Board. It passed the Senate in February 1932, but the House adjourned before coming to a decision. The Senate passed a version of the Glass bill that would have required commercial banks to eliminate their securities affiliates.[15]

The final Glass–Steagall provisions contained in the 1933 Banking Act reduced from five years to one year the period in which commercial banks were required to eliminate such affiliations.[16] Although the deposit insurance provisions of the 1933 Banking Act were very controversial, and drew veto threats from President Franklin Delano Roosevelt, President Roosevelt supported the Glass–Steagall provisions separating commercial and investment banking, and Representative Steagall included those provisions in his House bill that differed from Senator Glass's Senate bill primarily in its deposit insurance provisions.[17] Steagall insisted on protecting small banks while Glass felt that small banks were the weakness to U.S. banking.

This source states that Senator Glass proposed many versions of his bill to Congress known as the Glass Bills in the two years prior to the Glass–Steagall Act being passed. It also includes how the deposit insurance provisions of the bill were very controversial at the time, which almost led to the rejection of the bill once again.

The previous Glass Bills before the final revision all had similar goals and brought up the same objectives which were to separate commercial from investment banking, bring more banking activities under Federal Reserve supervision and to allow branch banking. In May 1933 Steagall's addition of allowing state chartered banks to receive federal deposit insurance and shortening the time in which banks needed to eliminate securities affiliates to one year was known as the driving force of what helped the Glass–Steagall act to be signed into law.

The Glass–Steagall separation of commercial and investment banking was in four sections of the 1933 Banking Act (sections 16, 20, 21, and 32).[1] The Banking Act of 1935 clarified the 1933 legislation and resolved inconsistencies in it. Together, they prevented commercial Federal Reserve member banks from:

The law gave banks one year after the law was passed on June 16, 1933 to decide whether they would be a commercial bank or an investment bank. Only 10 percent of a commercial bank's income could stem from securities. One exception to this rule was that commercial banks could underwrite government-issued bonds.

There were several "loopholes" that regulators and financial firms were able to exploit during the lifetime of Glass–Steagall restrictions. Aside from the Section 21 prohibition on securities firms taking deposits, neither savings and loans nor state-chartered banks that did not belong to the Federal Reserve System were restricted by Glass–Steagall. Glass–Steagall also did not prevent securities firms from owning such institutions. S&Ls and securities firms took advantage of these loopholes starting in the 1960s to create products and affiliated companies that chipped away at commercial banks' deposit and lending businesses.

The Glass–Steagall Legislation page specifies that only Federal Reserve member banks were affected by the provisions which according to secondary sources the act "applied direct prohibitions to the activities of certain commercial banks".

In the 1960s the Office of the Comptroller of the Currency issued aggressive interpretations of Glass–Steagall to permit national banks to engage in certain securities activities. Although most of these interpretations were overturned by court decisions, by the late 1970s bank regulators began issuing Glass–Steagall interpretations that were upheld by courts and that permitted banks and their affiliates to engage in an increasing variety and amount of securities activities. Starting in the 1960s banks and non-banks developed financial products that blurred the distinction between banking and securities products, as they increasingly competed with each other.

Separately, starting in the 1980s Congress debated bills to repeal Glass–Steagall's affiliation provisions (Sections 20 and 32). In 1999 Congress passed the Gramm–Leach–Bliley Act, also known as the Financial Services Modernization Act of 1999,[22] to repeal them. Eight days later, President Bill Clinton signed it into law.

After the financial crisis of 2007–08, some commentators argued that the repeal of Sections 20 and 32 had played an important role in leading to the housing bubble and financial crisis. Economics Nobel prize laureate Joseph Stiglitz, for instance, argued that "[w]hen repeal of Glass-Steagall brought investment and commercial banks together, the investment-bank culture came out on top," and banks which had previously been managed conservatively turned to riskier investments to increase their returns.[10] Another laureate, Paul Krugman, contended that the repealing of the act "was indeed a mistake," however it was not the cause of the financial crisis.[23]

Other commentators believed that these banking changes had no effect, and the financial crisis would have happened the same way if the regulations had still been in force.[24] Lawrence J. White, for instance, noted that "it was not [commercial banks'] investment banking activities, such as underwriting and dealing in securities, that did them in."[25]

At the time of the repeal, most commentators believed it would be harmless. Because the Federal Reserve's interpretations of the act had already weakened restrictions previously in place, commentators did not find much significance in the repeal, especially of sections 20 and 32.[13] Instead, the five year anniversary of its repeal was marked by numerous sources explaining that the GLBA had not significantly changed the market structure of the banking and securities industries. More significant changes had occurred during the 1990s when commercial banking firms had gained a significant role in securities markets through "Section 20 affiliates."

Following the financial crisis of 2007-08, legislators unsuccessfully tried to reinstate Glass–Steagall Sections 20 and 32 as part of the Dodd–Frank Wall Street Reform and Consumer Protection Act. Currently, bills are pending in United States Congress that would revise banking law regulation based on Glass–Steagall inspired principles. Both in the United States and elsewhere banking reforms have been proposed that also refer to Glass–Steagall principles. These proposals raise issues that were addressed during the long Glass–Steagall debate in the United States, including issues of “ring fencing” commercial banking operations and “narrow banking” proposals that would sharply reduce the permitted activities of commercial banks.