Government and binding (GB, GBT) is a theory of syntax and a phrase structure grammar (as opposed to a dependency grammar) in the tradition of transformational grammar developed principally by Noam Chomsky in the 1980s.[1][2][3] This theory is a radical revision of his earlier theories[4][5][6] and was later revised in The Minimalist Program (1995)[7] and several subsequent papers, the latest being Three Factors in Language Design (2005).[8] Although there is a large literature on government and binding theory which is not written by Chomsky, Chomsky's papers have been foundational in setting the research agenda.

The name refers to two central subtheories of the theory: government, which is an abstract syntactic relation applicable, among other things, to the assignment of case; and binding, which deals chiefly with the relationships between pronouns and the expressions with which they are co-referential. GB was the first theory to be based on the principles and parameters model of language, which also underlies the later developments of the minimalist program.

The main application of the government relation concerns the assignment of case. Government is defined as follows:

A governs B if and only if

In addition, barrier is defined as follows:[9] A barrier is any node Z such that

The government relation makes case assignment unambiguous. The tree diagram below illustrates how DPs are governed and assigned case by their governing heads: 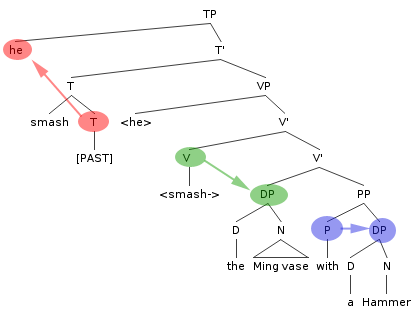 Another important application of the government relation constrains the occurrence and identity of traces as the Empty Category Principle requires them to be properly governed.

Binding can be defined as follows: 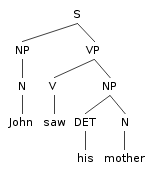 The NP "John" c-commands "his" because the first parent of the NP, S, contains "his". "John" and "his" are also coreferential (they refer to the same person), therefore "John" binds "his".

On the other hand, in the ungrammatical sentence "*The mother of Johni likes himselfi", "John" does not c-command "himself", so they have no binding relationship despite the fact that they corefer. 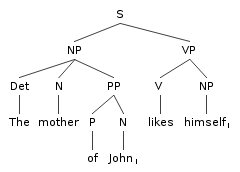 The importance of binding is shown in the grammaticality of the following sentences:

Since "himself" is not c-commanded by "John" in sentence [3], Principle A is violated.

In sentence [4], the first instance of "John" binds the second, violating Principle C.