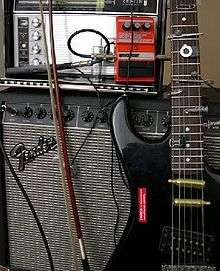 A prepared guitar is a guitar that has had its timbre altered by placing various objects on or between the instrument's strings, including other extended techniques. This practice is sometimes called tabletop guitar, because many prepared guitarists do not hold the instrument in the usual manner, but instead place the guitar on a table to manipulate it.

The idea of altering an instrument's timbre through the use of external objects has been applied to other instruments as well, most notably John Cage's prepared piano, which preceded the prepared guitar.

With prepared guitars, however, one of the key goals in preparing the instrument is changing its timbre – the fundamental tone composition of the sound. This is typically achieved by placing objects on or under the strings. The objects can have a tone of their own, like for instance a pen spring, but can also cause strange string resonance effects or behave like a seesaw and create echoing or buzzing effects after being struck and swinging like a balance. Many of the sounds sound more or less like clocks, bells or Non Western musical instruments or even non string percussion instruments.

The history of Norwegian composer and guitar player Bjørn Fongaard (1919–1980) probably marks the first steps into prepared guitar. He started off by constructing a quarter tone guitar with adaption of the fretboard, but very early left this in favour of a diverse set of prepared guitar techniques. His first pieces in this genre came in the mid 60's.

The method of actually preparing the guitar was developed in the late 1960s by Keith Rowe, in imitation of Jackson Pollock's painting method and John Cage's prepared piano. Rowe developed various prepared guitar techniques: placing the guitar flat on a table and manipulating the strings, body and pickups in unorthodox ways to produce sounds described as dark, brooding, compelling, expansive and alien. He has been known to employ objects such as a library card, rubber eraser, springs, hand-held electric fans, alligator clips, and common office supplies in playing the guitar.

Another pioneer was Fred Frith who in 1974 released a solo album called Guitar Solos. The album comprises eight tracks of unaccompanied and improvised music played on prepared guitars by Frith. The album was recorded using a modified 1936 Gibson K-11. Frith added an extra pickup over the strings at the nut, enabling him to amplify sound from both sides of the fretted note. He then split the fretboard in two with a capo, effectively giving him two guitars, each amplified separately, that he could play independently with each hand. To split the sounds further he attached alligator clips at various positions on the strings. The net result was a guitar with multiple sound sources that could be channeled to a mixer and distributed across the stereo soundscape.

In the 1980s Glenn Branca, Sonic Youth and other experimental art rockers also utilized prepared guitars. Koka Nikoladze developed a preparation technique, which afterwards was named "Nikoladze" Preparation. In this case an acoustic guitar was prepared with a certain type of a light bulb and produced synthetic - alike sound. The beautiful demonstration of upper mentioned technique is the composition "Starshine ~" for violin, prepared guitar and percussion.

Other contemporary prepared guitar composers/performers include: 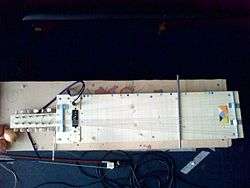 Beginning in the 1970s, guitarist and luthier Hans Reichel made some unusual guitars with third bridge-like qualities.

Bradford Reed (pencilina), Glenn Branca, Fred Frith and the band Neptune also made other individually different types of experimental third bridge guitars. Yuri Landman derived a just intoned musical scale from an initially considered atonal prepared guitar playing technique based on adding a 3rd bridge under the strings. He constructed an instrument called the Moodswinger with this scale. When this bridge is positioned in the noded positions of the harmonic series the volume of the instrument increases and the overtone becomes clear and has a consonant relation to the complementary opposed string part creating a harmonic multiphonic tone.[2]

Not much is published about the subject. The classical guitarists Elgart/Yates Duo have written a 24-page booklet Prepared Guitar Techniques on the subject for acoustic guitars. In 2012 Bart Hopkin and Yuri Landman wrote and published Nice Noise, a 72-page book about guitar preparations for acoustic as well as electric guitars. Besides guitar preparation techniques, the book also features several modified and custom built instruments made by Hopkin, Landman, Sonic Youth, Sam Dook of The Go! Team, Bradford Reed (Pencilina), Neil Feather and David Canright.