The Hachisuka clan (蜂須賀氏, Hachisuka-shi) are descendants of Emperor Seiwa (850-880) and are a branch of the Ashikaga clan and the Shiba clan (Seiwa Genji).

Ashikaga Ieuji (13th century), son of Ashikaga Yasuuji, was the first who adopted the name of Shiba. The Shiba were shugo (governors) of Echizen, Owari and other provinces, and were during the Ashikaga shogunate one of three families (Shiba, Hosokawa and Hatakeyama) from which the Kyoto-kanryo (prime minister of the shogun) could be chosen.

Shiba Masaaki, the descendant of Shiba Takatsune (+ 1367), established himself in Hachisuka, near Kiso river at the border of Owari and Mino provinces, whence he took the name Hachisuka.

In the 16th century, the Hachisuka clan came to prominence thanks to its head, Hachisuka Koroku. His uncle held Hachisuka castle and he lived first in Miyaushiro castle which was his mother's family home.[1] Koroku served the Oda clan, being instrumental in several of the early victories of Oda Nobunaga. He later went on to serve under Toyotomi Hideyoshi. 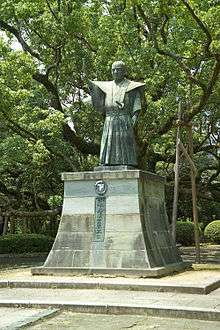 His son, Iemasa, received Tokushima Domain as a new landholding from Hideyoshi. From then until the end of the Edo period, the Hachisuka were the lords of Tokushima. They would be one of the few clans to retain the same landholding from the start of the Edo period to its conclusion. They also managed to retain a constant income rating of 256,000 koku.

In the late Edo period, the clan came into national focus because of the contemporary head, Hachisuka Narihiro, who was a son of the 11th shogun, Ienari.[2] The clan sided with the Kyoto government during the Boshin War and contributed troops to the fight in the north, as well as to security duties in Edo (Tokyo). The clan faced internal fragmentation a year later, in the form of the Inada Rebellion,[3] and was peacefully dissolved in 1873 with the rest of the nation's han. 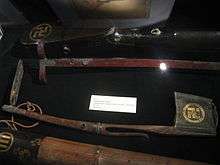 After the Meiji Restoration, the Hachisuka became part of the kazoku, Japan's new nobility system.