Hamadan is believed to be among the oldest Iranian cities and one of the oldest in the world. It is possible that it was occupied by the Assyrians in 1100 BCE; the Ancient Greek historian, Herodotus, states that it was the capital of the Medes, around 700 BCE.

Hamadan has a green mountainous area in the foothills of the 3,574-meter Alvand Mountain, in the midwest part of Iran. The city is 1,850 meters above sea level.

The special nature of this old city and its historic sites attract tourists during the summer to this city, located approximately 360 kilometres (220 miles) southwest of Tehran.

The main symbols of this city are the Ganj Nameh inscription, the Avicenna monument and the Baba Taher monument. The majority of the population is Persian; however, there is a considerable Azerbaijani minority.[3][4][5] 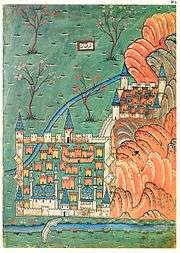 The Ganjnameh, a cuneiform inscription in Hamadan

According to Clifford Edmund Bosworth, "Hamadan is a very old city. It may conceivably, but improbably, be mentioned in cuneiform texts from ca. 1100 BC, the time of Assyrian King Tiglath-pilesar I, but is certainly mentioned by Herodotus (i.98) who says that the king of Media Diokes built the city of Agbatana or Ekbatana in the 7th century BC."[6]

Hamadan was established by the Medes and was the capital of the Median Empire. It then became one of several capital cities of the Achaemenid Dynasty.

Hamadan is mentioned in the biblical book of Ezra as the place where a scroll was found giving the Jews permission from King Darius to rebuild the temple in Jerusalem. (Ezra 6:2). Its ancient name of Ecbatana is used in the Ezra text. Because it was a mile above sea level, it was a good place to preserve leather documents.

During the Parthian era, Ctesiphon was the capital of the country, and Hamadan the summer capital and residence of the Parthian rulers. After the Parthians, the Sassanids constructed their summer palaces in Hamadan. In the year 633 the battle of Nahavand took place and Hamadan fell into the hands of the Muslim Arabs.

During the Buwayhids, the city suffered much damage. In the 11th century, the Seljuks shifted their capital from Baghdad to Hamadan. The city of Hamadan, its fortunes following the rise and fall of regional powers, was completely destroyed during the Timurid invasion. During the Safavid era, the city thrived. Thereafter, in the 18th century, Hamadan was surrendered to the Ottomans, but due to the work of Nader Shah e Afshar, Hamadan was cleared of invaders and, as a result of a peace treaty between Iran and the Ottomans, it was returned to Iran. Hamadan stands on the Silk Road, and even in recent centuries the city enjoyed strong commerce and trade as a result of its location on the main road network in the western region of Persia and Iran.

During World War I, the city was the scene of heavy fighting between Russian and Turko-German forces. It was occupied by both armies, and finally by the British, before it was returned to control of the Iranian government at the end of the war in 1918.

Hamadan province lies in a temperate mountainous region to the east of Zagros. The vast plains of the north and northeast of the province are influenced by strong winds, that almost last throughout the year. 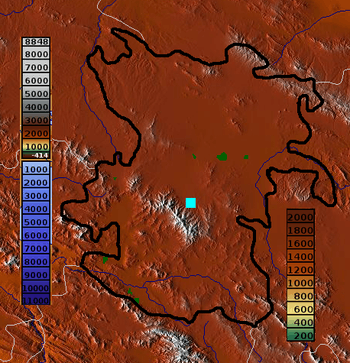 The various air currents of this region are: the north and north west winds of the spring and winter seasons, which are usually humid and bring rainfall. The west-east air currents that blow in the autumn, and the local winds that develop due to difference in air-pressure between the elevated areas and the plains, like the blind wind of the Asad Abad region.

Hamadan is in the vicinity of the Alvand mountains and has a dry summer continental climate (Köppen climate classification Dsa), in transition with a cold semi-arid climate (Köppen climate classification BSk), with snowy winters. In fact, it is one of the coldest cities in Iran. The temperature may drop below −30 °C (−22 °F) on the coldest days. Heavy snowfall is common during winter and this can persist for periods of up to two months. During the short summer, the weather is mild, pleasant, and mostly sunny. 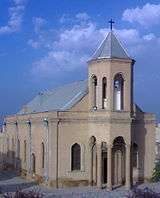 The Saint Mary Church of Hamadan 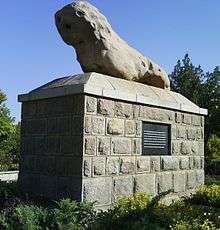 Hamadan is home to many poets and cultural celebrities. The city is also said to be among the world's oldest continuously inhabited cities.

Hamadan has always been well known for handicrafts like leather, ceramic, and carpets.

A tomb believed by some to hold the remains of tomb the biblical Esther and her cousin Mordechai is located in Hamadan.

The scientist and writer known in the west as Avicenna (Abu Ali Sina) is buried in Hamadan. The 11th-century Iranian poet Baba Taher is also interred in Hamadan.

This city is also the birthplace of Badi' al-Zaman al-Hamadani, author of the Maqamat.

PAS Hamedan F.C. were founded on June 9, 2007 after the dissolution of PAS Tehran F.C.. The team, along with Alvand Hamedan F.C., currently participates in the Azadegan League.

Some sport complexes in this city include: Qods Stadium, Shahid Mofatteh Stadium, Takhti Sport Complex and the National Stadium of Hamadan. 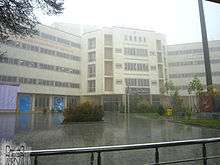 University of Technology, in Hamadan

Some of the popular universities in Hamadan include: 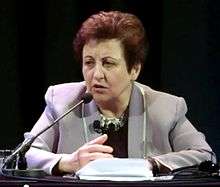 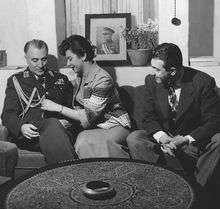 Fazlollah Zahedi and his family

Hamadan is twinned with: