The Old Persian language is one of the two directly attested Old Iranian languages (the other being Avestan). Old Persian appears primarily in the inscriptions, clay tablets, and seals of the Achaemenid era (c. 600 BCE to 300 BCE). Examples of Old Persian have been found in what is now present-day Iran, Romania (Gherla),[2][3][4] Armenia, Bahrain, Iraq, Turkey and Egypt,[5][6] the most important attestation by far being the contents of the Behistun Inscription (dated to 525 BCE). Recent research into the vast Persepolis Fortification Archive at the Oriental Institute at the University of Chicago have unearthed Old Persian tablets (2007).[7] This new text shows that the Old Persian language was a written language in use for practical recording and not only for royal display.[7]

The oldest date of use of Old Persian as a spoken language is not precisely known. According to certain historical assumptions about the early history and origin of ancient Persians in south-western Iran (where Achaemenids hailed from), Old Persian was originally spoken by a tribe called Parsuwash, who arrived in the Iranian Plateau early in the 1st millennium BCE and finally migrated down into the area of present-day Fārs province. Their language, Old Persian, became the official language of the Achaemenid kings.[9] Assyrian records, which in fact appear to provide the earliest evidence for ancient Iranian (Persian and Median) presence on the Iranian Plateau, give a good chronology but only an approximate geographical indication of what seem to be ancient Persians. In these records of the 9th century BCE, Parsuwash (along with Matai, presumably Medians) are first mentioned in the area of Lake Urmia in the records of Shalmaneser III.[10] The exact identity of the Parsuwash is not known for certain, but from a linguistic viewpoint the word matches Old Persian pārsa itself coming directly from the older word *pārćwa.[10] Also, as Old Persian contains many words from another extinct Iranian language, Median, according to P. O. Skjærvø it is probable that Old Persian had already been spoken before formation of the Achaemenid Empire and was spoken during most of the first half of the first millennium BCE.[9] Xenophon, a Greek general serving in some of the Persian expeditions, describes many aspects of Armenian village life and hospitality in around 401 BC, which is when Old Persian was still spoken and extensively used. He relates that the Armenian people spoke a language that to his ear sounded like the language of the Persians.[11]

By the 4th century BCE, the late Achaemenid period, the inscriptions of Artaxerxes II and Artaxerxes III differ enough from the language of Darius' inscriptions to be called a "pre-Middle Persian," or "post-Old Persian."[14] Old Persian subsequently evolved into Middle Persian, which is in turn the genetic ancestor of New Persian. Professor Gilbert Lazard, a famous Iranologist and the author of the book Persian Grammar states:[15]

The language known as New Persian, which usually is called at this period (early Islamic times) by the name of Parsi-Dari, can be classified linguistically as a continuation of Middle Persian, the official religious and literary language of Sassanian Iran, itself a continuation of Old Persian, the language of the Achaemenids. Unlike the other languages and dialects, ancient and modern, of the Iranian group such as Avestan, Parthian, Soghdian, Kurdish, Pashto, etc., Old, Middle and New Persian represent one and the same language at three states of its history. It had its origin in Fars and is differentiated by dialectical features, still easily recognizable from the dialect prevailing in north-western and eastern Iran.

Middle Persian, also sometimes called Pahlavi, is a direct continuation of old Persian, and was used as the written official language of the country.[16][17] Comparison of the evolution at each stage of the language shows great simplification in grammar and syntax. However, New Persian is a direct descendent of Middle and Old Persian.[18]

Old Persian "presumably"[14] has a Median language substrate. The Median element is readily identifiable because it did not share in the developments that were peculiar to Old Persian. Median forms "are found only in personal or geographical names [...] and some are typically from religious vocabulary and so could in principle also be influenced by Avestan." "Sometimes, both Median and Old Persian forms are found, which gave Old Persian a somewhat confusing and inconsistent look: 'horse,' for instance, is [attested in Old Persian as] both asa (OPers.) and aspa (Med.)."[14] 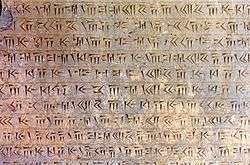 An Old Persian inscription in Persepolis.

Old Persian texts were written from left to right in the syllabic Old Persian cuneiform script and had 36 phonetic characters and 8 logograms. The usage of such characters are not obligatory.[19] The script was surprisingly[20] not a result of evolution of the script used in the nearby civilisation of Mesopotamia.[21] Despite the fact that Old Persian was written in cuneiform script, the script was not a direct continuation of Mesopotamian tradition and in fact, according to Schmitt, was a "deliberate creation of the sixth century BCE".[21]

The origin of the Old Persian cuneiform script and the identification of the date and process of introduction are a matter of discussion among Iranian scholars with no general agreement having been reached. The factors making the consensus difficult are, among others, the difficult passage DB (IV lines 88–92) from Darius the Great who speaks of a new "form of writing" being made by himself which is said to be "in Aryan", and analysis of certain Old Persian inscriptions that are "supposed or claimed" to predate Darius the Great. Although it is true that the oldest attested OP inscriptions are from Behistun monument from Darius, the creation of this "new type of writing" seems, according to Schmitt, "to have begun already under Cyrus the Great".[8]

The script shows a few changes in the shape of characters during the period it was used. This can be seen as a standardization of the heights of wedges, which in the beginning (i.e. in DB) took only half the height of a line.[22]

The following phonemes are expressed in the Old Persian script:

Notes: Lycian Kizzaprñna ~ Zisaprñna for (genuine) Old Persian *Ciçafarnā (besides the Median form *Ciθrafarnah) = Tissaphernes suggests /t͡s/ as the pronunciation of ç (compare and Kloekhorst 2008, p. 125 in for this example, who, however, mistakenly writes Çiçafarnā, which contradicts the etymology [PIIr. *Čitra-swarnas-] and the Middle Persian form Čehrfar [ç gives Middle Persian s]).

The phoneme /l/ does not occur in native Iranian vocabulary, only in borrowings from Akkadian (a new /l/ develops in Middle Persian from Old Persian /rd/ and the change of /rθ/ to /hl/). The phoneme /r/ can also form a syllable peak; both the way Persian names with syllabic /r/ (such as Brdiya) are rendered in Elamite and its further development in Middle Persian suggest that before the syllabic /r/, an epenthetic vowel [i] had developed already in the Old Persian period, which later became [u] after labials. For example, OP Vᵃ-rᵃ-kᵃ-a-nᵃ /vrkaːna/ is rendered in Elamite as Mirkānu-,[23] rendering transcriptions such as V(a)rakāna, Varkāna or even Vurkāna questionable, and making Vrkāna or Virkāna much more realistic (and equally for vrka- "wolf", Brdiya and other Old Persian words and names with syllabic /r/).

While v usually became /v/ in Middle Persian, it became /b/ word-initially, except before [u] (including the epenthetic vowel mentioned above), where it became /g/. This suggests that it was really pronounced as [w].

Adjectives are declinable in similar way.

Mostly the forms of first and third persons are attested. The only preserved Dual form is ajīvatam 'both lived'.