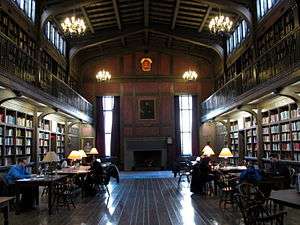 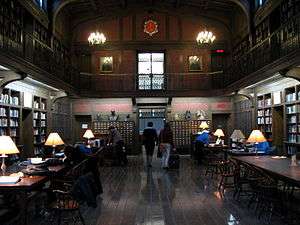 The Medical Historical Library, another view

The Harvey Cushing and John Hay Whitney Medical Library is the central library of the Yale School of Medicine in New Haven, Connecticut. Previously known as the Yale Medical Library, it is one of the finest modern medical libraries. The library is also renowned for its special and historical collections.

The library was built in 1941 as a Y-shaped addition to the Sterling Hall of Medicine designed by Grosvenor Atterbury with funds from the estate of John William Sterling. The library was renovated and enlarged in 1990 with funds from Betsey Cushing Whitney. The architects were Alexander Purves and Allan Dehar. After the renovation, the library was named for Betsey Cushing Whitney's father, Harvey Cushing, the pioneering neurosurgeon, Yale graduate and Sterling Professor, and her husband, John Hay Whitney, the businessman, Yale graduate and philanthropist.[1]

The Medical Historical Library was founded by Harvey Cushing, John F. Fulton, and Arnold C. Klebs in 1941 and possesses an internationally important collection of early and rare books, manuscripts, and other materials related to the history of medicine. Among its treasures are numerous rare medieval and Renaissance manuscripts, including works of Islamic and Persian provenance. Its holdings of printed books are spectacular and include over 300 medical incunabula as well as significant gatherings of Hippocrates, Galen, Vesalius, Robert Boyle, William Harvey, and S. Weir Mitchell in historical editions. The Clements C. Fry Print Collection possesses rare prints and drawings from the last four hundred years with outstanding examples by James Gillray, George Cruikshank, William Hogarth, Honoré Daumier and others.[2]