Georgian (ქართული ენა tr. kartuli ena) is a Kartvelian language spoken by Georgians. It is the official language of Georgia.

Georgian is written in its own writing system, the Georgian script.

Georgian is the literary language for all regional subgroups of Georgians, including those who speak other Kartvelian languages: Svans, Mingrelians and the Laz.

Georgian is the most pervasive of the Kartvelian languages, a family that also includes Svan and Megrelian (chiefly spoken in Northwest Georgia) and Laz (chiefly spoken along the Black Sea coast of Turkey, from Melyat, Rize to the Georgian frontier).

The history of the Georgian language can conventionally be divided into:[3]

Georgian shares a common ancestral language with Svan and Mingrelian/Laz. Georgian as separate from the other Kartvelian languages would have emerged in the 1st millennium BC in Caucasian Iberia. The earliest allusion to spoken Georgian may be a passage of the Roman grammarian Marcus Cornelius Fronto in the 2nd century AD: Fronto imagines the Iberians addressing the emperor Marcus Aurelius in their "incomprehensible tongue".[4]

The evolution of Georgian into a written language was a consequence of the conversion of the Georgian elite to Christianity in the mid-4th century. The new literary language was constructed on an already well-established cultural infrastructure, appropriating the functions, conventions, and status of Aramaic, the literary language of pagan Georgia, and the new national religion.[3] The first Georgian texts are inscriptions and palimpsests dating to the 5th century. Georgian has a rich literary tradition. The oldest surviving literary work in Georgian is the "Martyrdom of the Holy Queen Shushanik" (წამებაჲ წმიდისა შუშანიკისი დედოფლისაჲ, Tsamebai tsmidisa Shushanikisi dedoplisai) by Iakob Tsurtaveli, from the 5th century AD.

In the 11th century, Old Georgian gives rise to Middle Georgian, the literary language of the medieval kingdom of Georgia. The Georgian national epic, "The Knight in the Panther's Skin" (ვეფხისტყაოსანი, Vepkhistkaosani), by Shota Rustaveli, dates from the 12th century.

Symbols on the left are those of the IPA and those on the right are of the Georgian alphabet.

Prosody in Georgian involves stress, intonation, and rhythm. Stress is very weak, and linguists disagree as to where stress occurs in words.[8] Jun, Vicenik, and Lofstedt have proposed that Georgian stress and intonation are the result of pitch accents on the first syllable of a word and near the end of a phrase.[9] The rhythm of Georgian speech is syllable-timed.

Georgian contains many "harmonic clusters" involving two consonants of a similar type (voiced, aspirated, or ejective) which are pronounced with only a single release; e.g. ბგერა bgera (sound), ცხოვრება tskhovreba (life), and წყალი ts'q'ali (water).[10] There are also frequent consonant clusters, sometimes involving more than six consonants in a row, as may be seen in words like გვფრცქვნი gvprtskvni ("You peel us") and მწვრთნელი mts'vrtneli ("trainer").

Vicenik has observed that Georgian vowels following ejective stops have creaky voice and suggests this may be one cue distinguishing ejectives from their aspirated and voiced counterparts.[11] 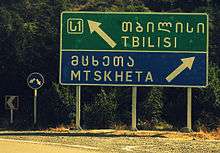 Georgian has been written in a variety of scripts over its history. Currently one, mkhedruli (military), is almost completely dominant; the others are used mostly in religious documents and architecture.

Mkhedruli has 33 letters in common use; a half dozen more are obsolete in Georgian, though still used in other alphabets, like Mingrelian, Laz, and Svan. The letters of mkhedruli correspond closely to the phonemes of the Georgian language.

According to the traditional account written down by Leonti Mroveli in the 11th century, the first Georgian script was created by the first king of Caucasian Iberia, Pharnavaz, in the 3rd century BC. However, the first examples of a Georgian script date from the 5th century AD. There are now three Georgian scripts, called asomtavruli (capitals), nuskhuri (small letters), and mkhedruli. The first two are used together as upper and lower case in the writings of the Georgian Orthodox Church, and together are called khutsuri (priests' alphabet).

In mkhedruli, there is no case. Sometimes, however, a capital-like effect, called mtavruli ('title' or 'heading'), is achieved by modifying the letters so that their vertical sizes are identical and they rest on the baseline with no descenders. These capital-like letters are often used in page headings, chapter titles, monumental inscriptions, and the like.

This is the Georgian standard[12] keyboard layout. The standard Windows keyboard is essentially that of manual typewriters.

Georgian is an agglutinative language. There are certain prefixes and suffixes that are joined together in order to build a verb. In some cases, there can be up to eight different morphemes in one verb at the same time. An example can be ageshenebinat ("you (pl) had built"). The verb can be broken down to parts: a-g-e-shen-eb-in-a-t. Each morpheme here contributes to the meaning of the verb tense or the person who has performed the verb. The verb conjugation also exhibits polypersonalism; a verb may potentially include morphemes representing both the subject and the object.

In Georgian morphophonology, syncope is a common phenomenon. When a suffix (especially the plural suffix -eb-) is attached to a word which has either of the vowels a or e in the last syllable, this vowel is, in most words, lost. For example, megobari means "friend". To say "friends", one says, megobØrebi (megobrebi), with the loss of a in the last syllable of the word root.

Georgian has seven noun cases: nominative, ergative, dative, genitive, instrumental, adverbial and vocative. An interesting feature of Georgian is that, while the subject of a sentence is generally in the nominative case, and the object is in the accusative case (or dative), in Georgian, one can find this reversed in many situations (this depends mainly on the character of the verb). This is called the dative construction. In the past tense of the transitive verbs, and in the present tense of the verb "to know", the subject is in the ergative case.

Georgian has a rich word-derivation system. By using a root, and adding some definite prefixes and suffixes, one can derive many nouns and adjectives from the root. For example, from the root -kartv-, the following words can be derived: Kartveli (a Georgian person), Kartuli (the Georgian language) and Sakartvelo (Georgia).

Georgian has a vigesimal numeric system like Basque or French, based on the counting system of 20. In order to express a number greater than 20 and less than 100, first the number of 20s in the number is stated and the remaining number is added. For example, 93 is expressed as ოთხმოცდაცამეტი - otkh-m-ots-da-tsamet'i (lit. four-times-twenty-and-thirteen).

One of the most important Georgian dictionaries is the Explanatory dictionary of the Georgian language (Georgian: ქართული ენის განმარტებითი ლექსიკონი). It consists of eight volumes and about 115,000 words. It was produced between 1950 and 1964, by a team of linguists under the direction of Arnold Chikobava.

Georgian has a word derivation system, which allows the derivation of nouns from verb roots both with prefixes and suffixes, for example:

It is also possible to derive verbs from nouns:

Likewise, verbs can be derived from adjectives, for example:

Words that begin with multiple consonants

In Georgian many nouns and adjectives begin with two or more contiguous consonants.

Article 1 of the Universal Declaration of Human Rights in Georgian:

All human beings are born free and equal in dignity and rights. They are endowed with reason and conscience and should act towards one another in a spirit of brotherhood.[14]