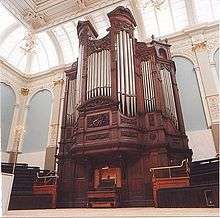 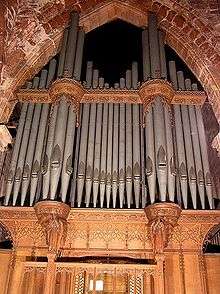 Henry Willis & Sons is a British firm of pipe organ builders founded in 1845 in London at 2 & 1/2 Foundling Terrace, Gray's Inn Road. Although most of their installations have been in the UK, examples can be found in other countries. Five generations of the Willis family served as principals of the firm until 1997 when Henry Willis 4 appointed David Wyld as Managing Director, who subsequently became the majority shareholder. From London, the firm had moved to a purpose-built works, designed by Henry Willis III, at Petersfield. After acquisition by David Wyld, the firm re-located to its present base and head office in Liverpool.

The founder of the company, the eponymous Henry Willis, was nicknamed "Father Willis" because of his contribution to the art and science of organ building and to distinguish him from his younger relatives working in the firm.

He was a friend of Samuel Sebastian Wesley whom he met at Cheltenham, and who was instrumental in gaining for Willis the contract for his first work on a cathedral organ, at Gloucester, in 1847. This was largely restoration of an existing instrument, but Willis always claimed that it was the success of this early work which established his reputation.

The Willis firm is regarded as the leading organ builder of the Victorian era, itself a time when both civic and religious commitment led to the construction of a large number of impressive buildings and other public works. During the Industrial Revolution many towns equipped themselves with imposing town halls, preferably with a Willis instrument of the symphonic organ style, and a substantial (and similarly equipped) church. Industrialists competed to endow the most lavish halls and instruments. The result was a convergence of both a very fine and technically proficient organ builder, and a substantial number of commissions for really exceptional instruments. This heritage continues with recent new instruments in Florence (Italy) and Auckland (New Zealand).

The Grand Organ built by Henry Willis & Sons in 1871 for the Royal Albert Hall had four manuals (keyboards) and 111 stops and was, at that time, the largest in the world.

The Grand Organ built by Henry Willis & Sons between 1923 and 1926 at the Cathedral Church of Christ in Liverpool is the largest pipe organ in the UK, with two five-manual consoles, 10,268 pipes and a trompette militaire.[5] (This last stop is, however, a modern addition by the Liverpool firm of David Wells.)

Windsor Castle had a Willis until it was destroyed by a fire in November 1992, as have Blenheim Palace and the Royal Academy of Music and several historic civic buildings including Reading Town Hall, Birmingham Town Hall (an historic organ originally built by William Hill, rebuilt by Henry Willis III, and now further rebuilt by other hands), Freemasons' Hall, London and the Sheldonian Theatre in Oxford, (the last also rebuilt by other hands and, sadly, currently unplayable).

The tiny hamlet of St Michael's, near Tenbury Wells also has a full organ which was installed in the new church created to support the then new St Michael's College in the mid-19th century. The 4,600 pipes organ built in 1892 was originally installed in the Brisbane Exhibition Building but in 1927 was moved to the Brisbane City Hall in Brisbane.[6] The organ in St Bees Priory Church (1899) was the last major instrument to be personally supervised by "Father" Henry Willis.

"Father" Willis's organ won a 'Council' gold medal in the Great Exhibition of 1851 at the Crystal Palace in Hyde Park, London. With 70 speaking stops this was the largest of the organs exhibited. It was a formidable achievement by the young Henry Willis. The organ was later installed in Winchester Cathedral by the family firm (largely due to the initiative of Samuel Sebastian Wesley, the then Cathedral organist) after being reduced to 49 speaking stops, which was felt at the time to be an appropriate size for the Cathedral. When installed at Winchester in 1854 it was the first cathedral organ in the world to have thumb pistons and a concave and radiating pedalboard, both the inventions of "Father" Willis (in collaboration with Wesley in the case of the pedalboard) and now standard features of organs throughout English-speaking countries. Another example of a fine "Father" Willis pipe organ can be found in the firm's present hometown of Liverpool at St George's Hall. This was an organ of 100 speaking stops dating from 1855. Wesley acted as the consultant for what was the most ambitious organ at that time, and the contract was awarded to Willis as a direct result of the success of his Great Exhibition organ.

The "Josiah Wedgwood" Willis organ has been installed in St Peter's Church on Hayling Island.

Henry Willis III built and worked on many organs across Britain, the most notable examples of his work (in addition to Liverpool Cathedral above) being in Westminster Cathedral and Sheffield City Hall, both built in 1932. These organs both contain stops invented by the builder: the Sylvestrina at 8 foot pitch on the Choir divisions.

Henry Willis IV built many Junior Development Plan Organs which he designed to be economical initially but with scope for expansion as funds became available. There is an example in St Anne's Church in East Wittering, West Sussex.