Henry the Fowler (German: Heinrich der Finkler or Heinrich der Vogler; Latin: Henricius Auceps) (876 – July 2, 936) was the duke of Saxony from 912 and the elected king of East Francia (Germany) from 919 until his death in 936. As the first non-Frankish king, he established the Ottonian Dynasty of kings and emperors, he is generally considered to be the founder and first king of the medieval German state, known until then as East Francia. An avid hunter, he obtained the epithet "the Fowler"[1] because he was allegedly fixing his birding nets when messengers arrived to inform him that he was to be king. By his death in July 936 Henry had prevented collapse of royal power, as had happened in West Francia, and left a much stronger kingdom to his successor Otto I. Henry died on July 2, 936 in his royal palace in Memleben, one of his favourite places. He was buried at Quedlinburg Abbey, established by his wife Matilda in his honor.

Born in Memleben, in what is now Saxony-Anhalt, Henry was the son of Otto the Illustrious, Duke of Saxony, and his wife Hedwiga, daughter of Henry of Franconia and Ingeltrude and a great-great-granddaughter of Charlemagne. In 906 he married Hatheburg von Merseburg, daughter of the Saxon count Erwin. She had previously been a nun. The marriage was annulled in 909 because her vows as a nun were deemed by the church to remain valid. She had already given birth to Henry's son Thankmar. The annulment placed a question mark over Thankmar's legitimacy. Later that year he married Matilda, daughter of Dietrich of Ringelheim, Count in Westphalia. Matilda bore him three sons, one called Otto, and two daughters, Hedwig and Gerberga, and founded many religious institutions, including the Quedlinburg Abbey where Henry is buried. She was later canonized. 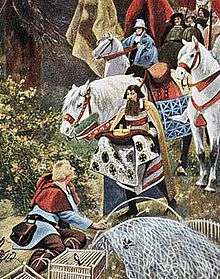 Henry became Duke of Saxony after his father's death in 912. An able ruler, he continued to strengthen the position of his duchy within the weakening kingdom of East Francia, and was frequently in conflict with his neighbors to the South in Duchy of Franconia.

On December 23, 918 Conrad I, king of East Francia and Franconian duke, died. Although Henry had rebelled against Conrad I between 912 and 915 over the lands in Thuringia, Conrad recommended Henry as his successor. Kingship now changed from Franks to Saxons, who had suffered greatly during the conquests of Charlemagne and were proud of their identity. Henry, as Saxon, was the first non-Frank on the throne.

Conrad's choice was conveyed by his brother, duke Eberhard III of Franconia at the Imperial Diet of Fritzlar in 919. The assembled Franconian and Saxon nobles elected Henry to be king with other regional dukes not participating in election. Archbishop Heriger of Mainz offered to anoint Henry according to the usual ceremony, but he refused - the only king of his time not to undergo that rite - allegedly because he wished to be king not by the church's but by the people's acclaim.

Henry, who was elected to kingship by only Saxons and Franconians at Fritzlar, had to subdue other dukes. Duke Arnulf of Bavaria did not submit until Henry defeated him in two campaigns in 921. Henry besieged his residence at Ratisbon (Regensburg) and forced Arnulf into submission. Arnulf had crowned himself as king of Bavaria in 919, but in 921 renounced crown and submitted to Henry while maintaining large autonomy and the right to mint his own coins. Duke Burchard II of Swabia soon swore fealty to the new King, but when he died, Henry appointed a noble from Franconia to be the new duke.

Henry was too weak to impose absolutist rule, and regarded his kingdom as a confederation of stem duchies rather than as a feudal monarchy and saw himself as primus inter pares (first among equals). Instead of seeking to administer the empire through counts, as Charlemagne had done and as his successors had attempted, Henry allowed the local dukes in Duchy of Franconia, Duchy of Swabia, and Duchy of Bavaria to maintain large internal autonomy.

In 920 king of West Francia Charles the Simple invaded and marched as far as Pfeddersheim near Worms, but retreated when he learned that Henry was organizing an army.[2] On November 7, 921, Henry and Charles met and concluded a treaty of friendship. Henry then saw an opportunity to wrest Lotharingia when a civil war over royal succession began in West Francia after coronation of king Robert I. In 923 Henry crossed the Rhine twice, capturing a large part of the duchy. The eastern part of Lotharingia was left in Henry's possession until October 924.

In 925 duke Gilbert of Lotharingia rebelled. Henry invaded the duchy and besieged Gilbert at Zülpich (Tolbiac), captured the town, and became master of a large portion of his lands. Allowing Gilbert to remain in power as duke, Henry arranged the marriage of his daughter Gerberga to his new vassal in 928. Thus he brought that realm, which had been lost in 910, back into the kingdom as the fifth stem duchy.

The threat of Magyar raiders improved his situation, as all the dukes and nobles realized that only a strong state could defend their lands against barbarian incursions.

In 921 Magyars once again invaded East Francia and Italy. Although a sizable Magyar force was defeated near Bleiburg in the Bavarian March of Carinthia by Eberhard and the Count of Meran[3] and another group was routed by Liutfried, count of Elsass (French reading: Alsace), the Magyars continued raiding East Francia.

Henry, having captured a Hungarian prince, managed to arrange a ten-year-truce in 926, though he agreed to pay annual tribute. By doing so he and dukes gained time to build new fortified towns and to train a new elite cavalry force.[4] Henry adapted Anglo-Saxon method of building fortified towns to defend against Danish and Celtic invasions, and built similar fortified settlements as a defense against Magyar and Slav invaders. In 932 Henry refused to pay the annual tribute to Magyars. When they began raiding again, Henry, with his improved army in 933 at the Battle of Riade crushed Magyars so completely, that they never returned to the northern lands of Henry’s kingdom. [5]

During the truce with the Magyars, Henry subdued the Polabian Slavs who lived on his eastern borders. In the winter of 928 he marched against the Slavic Hevelli tribes and seized their capital, Brandenburg. He then invaded the Glomacze lands on the middle Elbe river, conquering the capital Gana (Jahna) after a siege, and had a fortress (the later Albrechtsburg) built at Meissen. In 929, with the help of Arnulf of Bavaria, Henry entered Duchy of Bohemia and forced Duke Wenceslaus I to resume the annual payment of tribute to the king.[6]

Meanwhile the Slavic Redarii had driven away their chief, captured the town of Walsleben and massacred its inhabitants. Counts Bernard and Thietmar marched against the fortress of Lenzen beyond the Elbe, and, after fierce fighting, completely routed the enemy on September 4, 929. The Lusatians and the Ukrani on the lower Oder were subdued and made tributary in 932 and 934, respectively.[7] In conquered lands Henry did not create march administration, which was implemented by his successor Otto I.

Henry also pacified territories to the north, where the Danes had been harrying the Frisians by sea. The monk and chronicler Widukind of Corvey in his Res gestae Saxonicae reports that the Danes were subjects of Henry the Fowler. Henry incorporated into his kingdom territories held by the Wends, who together with the Danes had attacked Germany, and also conquered Schleswig in 934.[8]

As the first Saxon king of East Francia, Henry was the founder of the Ottonian dynasty. He and his descendants ruled East Francia, and later the Holy Roman Empire, from 919 until 1024.

Henry had two wives and at least six children. 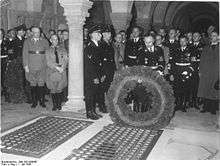 Henry returned to public attention as a character in Richard Wagner's opera, Lohengrin (1850), trying to gain the support of the Brabantian nobles against the Magyars. After the attempts to achieve German national unity failed with the Revolutions of 1848, Wagner strongly relied on the picture of Henry as the actual ruler of all German tribes as advocated by pan-Germanist activists like Friedrich Ludwig Jahn.

There are indications that Heinrich Himmler saw himself as the reincarnation of Henry, who was proclaimed to be the first king of Germany.[9] Nazi ideology referred to Henry as a founding father of the German nation, fighting both the Latin Western Franks and the Slavic tribes of the East, thereby a precursor of the German Drang nach Osten.