Present-day North Brabant (Staats-Brabant) was adjudicated to the Generality Lands of the Dutch Republic according to the 1648 Peace of Westphalia, while the reduced duchy remained part of the Southern Netherlands until it was conquered by French Revolutionary forces in 1794. Today all the duchy's former territories, apart from exclaves are in Belgium except for the Dutch province of North Brabant. 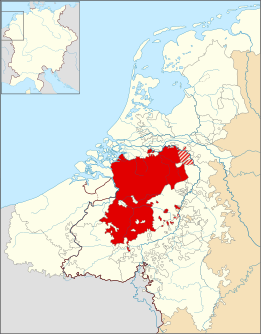 Map of the Duchy of Brabant (1350) within the 17 provinces and the borders of the Holy Roman Empire (thick line).

The Duchy of Brabant was historically divided into four parts, each with its own capital. The four capitals were Leuven, Brussels, Antwerp and 's-Hertogenbosch. Before 's-Hertogenbosch was founded, Tienen was the fourth capital.[1]

Its territory consisted essentially of the three modern-day Belgian provinces of Flemish Brabant, Walloon Brabant and Antwerp, the Brussels-Capital Region and most of the present-day Dutch province of North Brabant. Its most important cities were Brussels, Antwerp, Leuven, Breda, 's-Hertogenbosch, Lier and Mechelen.

The modern flag of Belgium takes its colors from Brabant's coat of arms: a lion or (a golden lion) armed and langued gules (with red claws and tongue) as a primary heraldic charge on a black field.

Probably first used by Count Lambert I of Louvain (ruled 1003-1015), the lion is documented in a 1306 town's seal of Kerpen, together with the red lion of Limburg. Up to the present, the Brabant lion features as the primary charge on the coats of arms of both Flemish and Walloon Brabant, and of the Dutch province of North Brabant.

The region's name is first recorded as the Carolingian shire pagus Bracbatensis, located between the rivers Scheldt and Dijle, from braec "marshy" and bant "region". Upon the 843 Treaty of Verdun it was part of Lotharingia within short-lived Middle Francia, and was ceded to East Francia according to the 880 Treaty of Ribemont.

In earlier Roman times, the Nervii, a Belgic tribe, lived in the same area. They were incorporated into the Roman province of Belgica, and considered to have both Celtic and Germanic cultural links. At the end of the Roman period the region was conquered by the Germanic Franks.

In 959 the East Frankish king Otto I of Germany elevated Count Godfrey of Jülich to the rank of duke of Lower Lorraine. In 962 the duchy became an integral part of the Holy Roman Empire, where Godfrey's successors of the ducal Ardennes-Verdun dynasty also ruled over the Gau of Brabant. Here, the counts of Leuven rose to power, when about 1000 Count Lambert I the Bearded married Gerberga, the daughter of Duke Charles of Lower Lorraine, and acquired the County of Brussels. About 1024 southernmost Brabant fell to Count Reginar V of Mons (Bergen, later Hainaut), and Imperial lands up to the Schelde river in the west came under the rule of the French Counts Baldwin V of Flanders by 1059. Upon the death of Count Palatine Herman II of Lotharingia in 1085, Emperor Henry IV assigned his fief between the Dender and Zenne rivers as the Landgraviate of Brabant to Count Henry III of Leuven and Brussels.

About one hundred years later, in 1183/1184, Emperor Frederick I Barbarossa formally established the Duchy of Brabant and created the hereditary title of duke of Brabant in favour of Henry I of Brabant, son of Count Godfrey III of Leuven. Although the original county was still quite small - and limited to the territory between the Dender and Zenne rivers, situated to the west of Brussels - from the 13th century onwards its name came to apply to the entire territory under control of the dukes.

In 1190, after the death of Godfrey III, Henry I also became Duke of Lower Lotharingia. By that time the title had lost most of its territorial authority. According to protocol, all his successors were thereafter called Dukes of Brabant and Lower Lotharingia (often called Duke of Lothier).

After the Battle of Worringen in 1288, the dukes of Brabant also acquired the Duchy of Limburg and the lands of Overmaas (trans-Meuse). In 1354 Duke John III of Brabant granted a Joyous Entry (charter of liberty) to the citizens of Brabant.

In 1430 the Duchies of Lower Lotharingia, Brabant and Limburg were inherited by Philip the Good of Burgundy and became part of the Burgundian Netherlands. 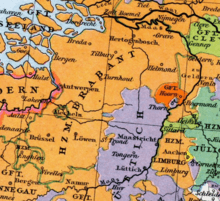 The Duchy of Brabant in the 15th century 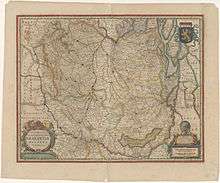 Novissima et Accuratissima Brabantiae Ducatus Tabula (a very new and most accurate map of the Duchy of Brabant); by Hendrik Hondius, 1629

The Eighty Years' War (1568–1648) brought the northern parts (essentially the present Dutch province of North Brabant) under military control of the northern insurgents. After the Treaty of Westphalia in 1648, the United Provinces' independence was confirmed and northern Brabant was formally ceded to the United Provinces as Staats-Brabant, a federally governed territory and part of the Dutch Republic.

The southern part remained in Spanish Habsburg hands as a part of the Southern Netherlands. It was transferred to the Austrian branch of the Habsburg monarchy in 1714. Brabant was included in the unrecognised United States of Belgium, which existed from January to December 1790 during short-lived revolt against Emperor Joseph II, until imperial troops regained the Austrian Netherlands for Leopold II who had succeeded his brother.

The area was overrun during the French Revolution in 1794, and formally annexed by France in 1795. The duchy of Brabant was dissolved and the territory was reorganised in the départements of Deux-Nèthes (present province of Antwerp) and Dyle (the later province of Brabant).

After the defeat of Bonaparte in 1815, the United Kingdom of the Netherlands was created at the Congress of Vienna. The three old provinces were restored as North Brabant, Antwerp and South Brabant. The latter two became part of modern Belgium when it was created in 1830, South Brabant becoming simply Brabant province.

Brabant had fortified walled cities and unwalled cities. The unwalled cities did not have the right to construct walls. Trade was allowed in these areas and usually this right resulted in a larger population and the development of major villages and later cities. The unwalled cities had also the right to hold markets which they held on large market squares. This distinguishes them from surrounding villages who were not allowed to hold markets and did not possess market squares. Being unwalled also meant that some of these places suffered heavily in war and during the Dutch Revolt.

Note: the city of Mechelen formed an independent state along with the Land of Heist-op-den-Berg and Gestel. Willemstad, Geertruidenberg and Klundert were part of the County of Holland; whose name in turn was later used to describe or label large areas of the Netherlands.