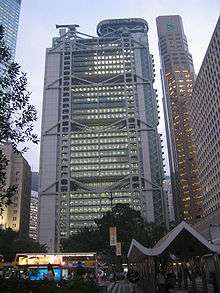 The HSBC Hong Kong headquarters, completed in 1985, is one example of high-tech architecture.

Like Brutalism, Structural Expressionist buildings reveal their structure on the outside as well as the inside, but with visual emphasis placed on the internal steel and/or concrete skeletal structure as opposed to exterior concrete walls. In buildings such as the Pompidou Centre, this idea of revealed structure is taken to the extreme, with apparently structural components serving little or no structural role. In this case, the use of "structural" steel is a stylistic or aesthetic matter.

The style's premier practitioners include Colombian architect Bruce Graham and Bangladeshi architect Fazlur Rahman Khan for the John Hancock Centre, Willis Tower and Onterie Center, British architects Sir Norman Foster, Sir Richard Rogers, Sir Michael Hopkins, Italian architect Renzo Piano and Spanish architect Santiago Calatrava, known for his organic, skeleton-like designs. Early high-tech buildings were referred to by historian Reyner Banham as "serviced sheds" due to their exposure of mechanical services in addition to the structure. Most of these early examples used exposed structural steel as their material of choice. As hollow structural sections had only become widely available in the early 1970s, high-tech architecture saw much experimentation with this material. 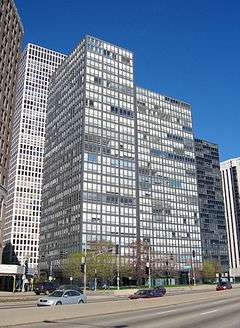 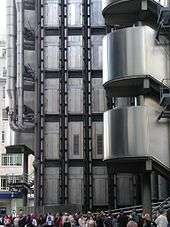 Buildings in this architectural style were constructed mainly in North America and Europe. It is deeply connected with what is called the Second School of Chicago which emerged after World War II. The main content is that the technological kind of construction, mostly with steel and glass, is expressed in a formal independent way to gain aesthetic qualities from it. The first proper example are the 860-880 Lake Shore Drive Apartments by German architect Ludwig Mies van der Rohe.

The style got its name from the book High Tech: The Industrial Style and Source Book for The Home, written by design journalists Joan Kron and Suzanne Slesin and published in November 1978 by Clarkson N. Potter, New York. The book, illustrated with hundreds of photos, showed how designers, architects, and home owners were appropriating classic industrial objects—library shelving, chemical glass, metal deck plate, restaurant supply, factory and airport runway light fixtures, movers' quilts, industrial carpeting etc.—found in industrial catalogues and putting these to use in residential settings. The foreword to the book by architect Emilio Ambasz, former curator of design at the Museum of Modern Art, put the trend in historical context.

As a result of the publicity and popularity of the book, the decorating style became known as "High-Tech", and accelerated the entry of the still-obscure term "high-tech" into everyday language. In 1979, the term high-tech appeared for the first time in a New Yorker magazine cartoon showing a woman berating her husband for not being high-tech enough: "You're middle-, middle-, middle-tech." After Esquire excerpted Kron and Slesin's book in six installments, mainstream retailers across the United States, beginning with Macy's New York, started featuring high-tech decor in windows and in furniture departments. But credit should go to a shop on 64th Street and Lexington Avenue in New York, Ad Hoc Housewares, which opened in 1977, for marketing these objects to a residential audience before anyone else. The book went on to be reprinted in England, France, and Japan, and like the original, each edition included a directory of local sources for the objects.

High-tech architecture was, in some ways, a response to growing disillusionment with modern architecture. The realization of Le Corbusier's urban development plans led to cities with monotonous and standardized buildings. Enthusiasm for economic building led to extremely low-quality finishes, with subsequent degradation countering a now-waning aesthetic novelty. High-tech architecture created a new aesthetic in contrast with standard modern architecture. In High Tech: The Industrial Style and Source Book for The Home, when discussing the high-tech aesthetic, the authors emphasized using elements "your parents might find insulting". This humour so aptly demonstrates the rebellious attitude.

Kron and Slesin further explain the term "high-tech" as one being used in architectural circles to describe an increasing number of residences and public buildings with a "nuts-and-bolts, exposed-pipes, technological look". A prime example of this is the Centre Pompidou in Paris. This highlights one of the aims of high-tech architecture, to show the technical elements of the building by externalizing them. Thus, the technical aspects create the building's aesthetic.

For interior design there was a trend of using formerly industrial appliances as household objects, e.g. chemical beakers as vases for flowers. This was because of an aim to use an industrial aesthetic. This was assisted by the conversion of former industrial spaces into residential spaces. High-tech architecture aimed to give everything an industrial appearance.

Another aspect to the aims of high-tech architecture was that of a renewed belief in the power of technology to improve the world. This is especially evident in Kenzo Tange's plans for technically sophisticated buildings in Japan's post-war boom in the 1960s, but few of these plans actually became buildings. High-tech architecture aimed to achieve a new industrial aesthetic, spurred on by the renewed faith in the progression of technology.

But however prominent the industrial look appeared, the functional element of modern architecture was very much retained. The pieces still served a purpose in the building's function. The function of the building was also aimed as not being set. This dynamic property means that a building should be a "catalyst", the "technical services are provided but do not become set." 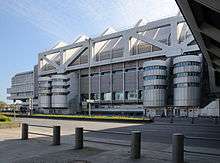 Structure of high-tech architecture have varied somewhat, yet all have accentuated technical elements. They included the prominent display of the building's technical and functional components, and an orderly arrangement and use of pre-fabricated elements. Glass walls and steel frames were also immensely popular.

To boast technical features, they were externalized, often along with load-bearing structures. There can be no more illustrious example than Pompidou Centre. The ventilation ducts are all prominently shown on the outside. This was a radical design, as previous ventilation ducts would have been a component hidden on the inside of the building. The means of access to the building is also on the outside, with the large tube allowing visitors to enter the building.

The orderly and logical fashion in which buildings in the high-tech architectural style are designed to keep to their functional essence is demonstrated in Norman Foster's Hong Kong and Shanghai Bank HQ. Besides the technology being the overriding feature of the building, its design is very much functionally orientated. The large interior open space and the easy access to all floors enhance the function of being a bank. Also, the elements of the buildings are very neatly composed to achieve optimal orderliness in order to logically solve the problem of the needs of a bank. This can be seen in the levels' structure and in the escalators.

The high-tech buildings make persistent use of glass curtain walls and steel structure. It is greatly indebted to modern architecture for this, and influenced by Mies van der Rohe's highrise buildings. Bruce Graham's Willis Tower demonstrates that with glass walls and skeleton pipe structure of steel, a very tall building can be built. Many high-tech buildings meant their purposes to be dynamic. This could best be explained by Günther Behnisch and Frei Otto's Munich Olympic Stadium. This structure made sport in the open possible and is meant to be used for many purposes. Originally an abandoned airfield, it is now a sport stadium, used for various disciplines.

Buildings designed in this style usually consist of a clear glass façade, with the building's network of support beams exposed behind it. Perhaps the most famous and easily recognized building built in this style is I.M. Pei's Bank of China Tower in Hong Kong. The World Trade Center in New York City, although generally considered to be an International Style building, was technically a Structural Expressionist design due to its load-bearing steel frame. 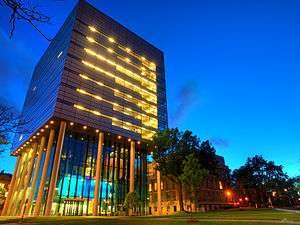 The Leslie L. Dan Pharmacy Building at the University of Toronto was completed in 2006.

Torre Agbar in Barcelona was completed in 2004.