The German Imperial Embassy (designed 1911-12) on St. Isaac's Square, Saint Petersburg, is considered the key template for Stripped Classicism. It was stripped still further when the large statues originally placed on the plinth on the roof were removed during World War I.

Stripped Classicism (or "Starved Classicism" or "Grecian Moderne")[1] is primarily a 20th-century classicist architectural style stripped of most or all ornamentation, frequently employed by governments while designing official buildings. It was adapted by both totalitarian and democratic regimes.[upper-alpha 1] The style embraces a "simplified but recognizable" classicism in its overall massing and scale while eliminating traditional decorative detailing.[3][4][5][6] The orders of architecture are only hinted at or are indirectly implicated in the form and structure.[upper-alpha 2]

Despite its etymological similarity, Stripped Classicism is sometimes distinguished from "Starved Classicism", the latter "displaying little feeling for rules, proportions, details, and finesse, and lacking all verve and élan".[5][7] At other times the terms "stripped" and "starved" are used interchangeably.[8][9] 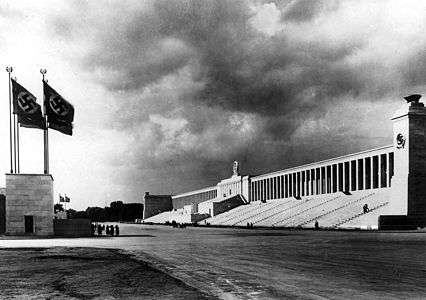 Albert Speer's Zeppelinfeld outside Nuremberg, in 1934

Between the World Wars, a stripped-down classicism became the de facto standard for many monumental and institutional governmental buildings all over the world.[2] Governments used this architectural méthode to straddle modernism and classicism, an ideal political response to a modernizing world.[10] In part, this movement was said to have origins in the need to save money in governmental works by eschewing the expense of hand-worked classical detail.[6]

In Europe, examples as early as the German embassy in Russia, designed by Peter Behrens and completed in 1912, "established models for the classical purity aspired to by high modernists like Mies van der Rohe but also for the oversized, Stripped Classicism of Hitler's, Stalin's and Ulbricht's architects and perhaps of American, British and French official buildings in the 1930s as well".[11] The style later found adherents in the Fascist regimes of Germany[12] and Italy as well as in the Soviet Union during Stalin's regime.[13] Albert Speer's Zeppelinfeld and other parts of the Nazi party rally grounds complex outside Nuremberg was perhaps the most famous example in Germany, using classical elements such as columns and altars alongside modern technology such as spotlights. The Casa del Fascio in Como has also been aligned with the movement. In the USSR some of the proposals for the unbuilt Palace of the Soviets also had characteristics of the style.[2]

Among American architects, the work of Paul Philippe Cret exemplifies the style. His Château-Thierry American Monument built in 1928 has been identified as an early example.[14] Among his other works identified with the style are the exterior of the 1933 Folger Shakespeare Library in Washington, D.C. (though not the Tudor Revival library interior), the 1937 University of Texas at Austin's Main Tower, the 1937 Federal Reserve Building in Washington, D.C. and the 1939 Bethesda Naval Hospital tower.[14][15][16]

It is sometimes evident in buildings that were constructed by the Works Projects Administration during the Great Depression, albeit with a mix of Art Deco architecture or its elements. Related styles have been described as PWA Moderne and Greco Deco.[17][18]

Despite its popularity with totalitarian regimes, it has been adapted by many English-speaking democratic governments, including during the New Deal in the United States.[2] In any event, presumed "fascist" underpinnings have hampered acceptance into mainstream architectural thought.[2] There is no evidence that architects who favored this style had a particular right-wing political disposition. Nevertheless, both Adolf Hitler and Benito Mussolini were fans.[19][20] On the other hand, Stripped Classicism was favored by Joseph Stalin and various regional Communist regimes.[13]

After the fall of the Third Reich and end of World War II, the style fell out of favor. However, it was somewhat revived in designs in the 1960s.[6] Included was Philip Johnson's New York Lincoln Center for the Performing Arts,[6] evidencing "a revival in the Stripped Classical style". Likewise, Canberra, Australia saw the Law Courts of the ACT (1961) and the National Library of Australia (1968) resurrect grand Stripped Classical designs.[6][21] See Australian non-residential architectural styles.