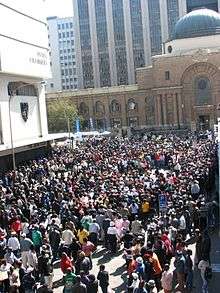 A crowd outside the Johannesburg High Court during the Jacob Zuma rape trial.

The High Court of South Africa (Tswana: Kgotlatshekelokgolo; Sotho: Lekgotla le Phahameng la Dinyewe; Northern Sotho: Kgorotsheko ya Godimo; Afrikaans: Hoë Hof; Zulu: iNkantolo Ephakeme; Southern Ndebele: iKhotho ePhakemeko; Xhosa: iNkundla ePhakamileyo; Swazi: liKhotho Leliphakeme; Venda: Khothekhaṱhuli; Tsonga: Huvonkulu) is a superior court of law in South Africa. At present it is divided into seven provincial divisions, some of which sit in more than one location. Two further divisions are in the process of being established. Each High Court division has general jurisdiction over a defined geographical area in which it is situated, and the decisions of a division are binding on magistrates' courts within its area of jurisdiction. The High Court has jurisdiction over all matters, but it usually only hears civil matters involving more than 100,000 rand, and serious criminal cases. It also hears any appeals or reviews from magistrates' courts and other lower courts.

The court and its divisions are constituted in their current form by the Superior Courts Act, 2013, and replaced the previous separate High Courts, which in turn replaced the provincial and local divisions of the former Supreme Court of South Africa and the supreme courts of the TBVC states.

Each division is headed by a Judge President. The registrar keeps all the official court documents. The family advocate must be consulted on all matters involving children, as the High Court is the "upper guardian" of all children in South Africa. The Master of the High Court keeps all the records relating to people's estates (deceased or insolvent). The Sheriff delivers certain documents to the parties in a civil case, and also attaches property when a warrant is issued. The Director of Public Prosecutions, who used to be called the Attorney-General, is responsible for criminal prosecutions by the state. The State Attorney is the lawyer who represents the state in civil actions (where the state is suing or being sued).

As of August 2016 the Mpumalanga Division at Nelspruit is yet to be established. Until it is established, the Gauteng Division serves Mpumalanga with circuit courts at Mbombela and Middelburg.

Circuit Courts are also part of the High Court. They sit at least twice a year, moving around to serve more rural areas.