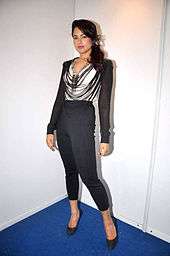 A high-rise or high-waisted garment is one designed to sit high on, or above, the wearer's hips, usually at least 8 centimetres (3 inches) higher than the navel. In western cultures, high-rise jeans were especially common in the 1970s, in competition with low-rise pants.

In European menswear, pants sat level with the navel until the 1950s, and were held up by a pair of suspenders. During the 1940s, Zoot suiters[2] wore pants with a waistband so high that they often reached the chest.[3]

Low-waisted drainpipe jeans and flared trousers were a counterculture statement among the Mods and hippies of the late 1960s and early 1970s, in contrast to the higher waisted Levi Strauss jeans teenagers had worn previously. During the late 1970s, however, there was a backlash against disco and hippie fashions, and members of Generation X opted for higher rise pants. These straight leg acid wash jeans remained popular throughout the 1980s and 1990s, until hip hop fashion went mainstream and it became fashionable for teenagers to sag their baggy pants.[4]

During the mid-2010s, high waisted pants underwent a revival among younger women, in reaction to the low-rise skinny jeans worn previously by scene kids and indie kids. These so-called "mom jeans" remained tight in the leg, but had a more relaxed fit in the waist. Female celebrities who were seen in high-rise clothing included Lady Gaga,[5] Rihanna, Pixie Lott,[6] Kim Kardashian, and Selena Gomez.[7]

For males, however, high-rise trousers remain associated with nerds and unfashionable older men. During the 2000s and 2010s, male celebrities who wore high-rise jeans, including President Barack Obama, Simon Cowell,[8] and Top Gear presenter Jeremy Clarkson, were ridiculed by the press.[9][10]

In ancient India, some Indian philosophers opposed saris that expose the midriff. They considered it to be a symbol of adultery.[11]

The Dharmasastra writers stated that women should be dressed such that the navel would not become visible.[12] Still today, some corporate offices in India have strict dress codes for women, requiring high-rise saris to be worn to avoid navel exposure.[13]