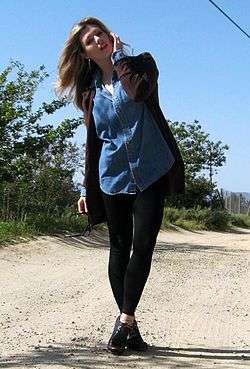 Leggings are a type of skin-tight garment that covers the legs and may be worn by both men and women. Originally, leggings were two separate garments, one for each leg.

Modern leggings are typically made from a blend of lycra (aka spandex), nylon, cotton, or polyester blend, but can also be made from wool, silk, and other materials. Leggings are available in a multitude of colors and decorative designs. Leggings are sometimes worn fully exposed, but are more traditionally worn partially covered by a garment such as a skirt, a large t-shirt, shorts, or fully covered by an outer garment, such as a full length skirt.

Leggings are typically ankle-length, and some are stirrupped. Some are shorter. Leggings are worn to keep a person's legs warm, as protection from chafing during an activity such as exercise, or as a decorative or fashion garment. Leggings are worn by both men and women during exercise but usually only by women at other times. In contemporary usage, leggings refers to tight, form-fitting trousers that extend from the waist to the ankles. 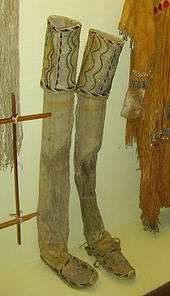 Leggings of the Native Americans (Karl May Museum, Radebeul).

Leggings in various forms and under various names have been worn for warmth and protection by both men and women throughout the centuries. The separate hose worn by men in Europe from the 13th to 16th centuries (the Renaissance period) were a form of leggings, as are the trews of the Scottish Highlands. Separate leggings of buckskin leather were worn by some Native Americans. These were adopted by some Long Hunters, French fur trappers, and later by mountain men. They are the leatherstockings of James Fenimore Cooper's Leatherstocking Tales. The Buckskins were mostly a dull grey brain-tan, not the bright, glossy vegetable tanned leather commonly used today.

Cowboys wore leggings of buckskin to protect from chapping caused by riding, wear and tear to their pants, and bites from animals, such as snakes or insects in the scruff, such as ticks.

In many places, especially in colder countries such as Russia or Korea, men and women continued to wear wool leggings into modern times, often as an additional outer layer for warmth.

The linen pantalettes worn by girls and women under crinolines in the mid-19th century were also a form of leggings, and were originally two separate garments. Leggings became a part of fashion in the 1960s, as trousers similar to the capri pants but much tighter. 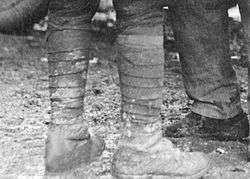 Since the late 19th century, soldiers of various nations, especially infantry, often wore leggings to protect their lower leg, to keep dirt, sand, and mud from entering their shoes, and to provide a measure of ankle support. At first, these were usually puttees—strips of thick woolen cloth resembling a large bandage—were wrapped around the leg to support the ankle. They were usually held in place by a strap attached to the cloth. Later, puttees were replaced by some armies with canvas leggings fastened with buckles or buttons, usually secured at the bottom with an adjustable stirrup that passed under the sole of the shoe, just in front of the heel. The soldier placed the leggings around his calf with the buttoned side facing out and adjusted them and the strap to achieve a proper fit. Leggings typically extended to mid-calf and had a garter strap to hold them up and were secured with a tie just below the knee. Military leggings only extended to the bottom of the knee and buttoned to the bottom button on the knee-breeches. They are sometimes confused with gaiters, which only extend to the high ankle and are worn with full leg trousers.

During World War II, United States Army foot soldiers were referred to as legs by paratroopers and other U.S. forces that did not wear the standard Army leggings issued with the field service shoe. Late in World War II, after experimenting with general issue of high-top combat boots and jump boots for their soldiers, leggings began to disappear from military service. In 1943, the United States Army modified their field service shoe by adding a taller leather upper that reached to the lower calf; secured by a combination of laces and buckles, the new design was designated the Type III Field Boot. However, the United States Marine Corps retained canvas leggings throughout the war, and even used them in combat as late as the Korean War; they were referred to as Yellow Leg troops by North Korean and Chinese Communist forces.[1]

By the 1960s, the old style of field shoe had given way to combat boots in most military forces, and leggings of any kind were obsolete. Leggings, usually bright white and often made of patent leather or buff are now worn primarily for ceremonial purposes. 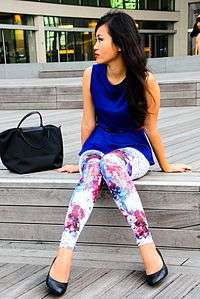 A woman wearing white leggings with a floral design

Leggings in the form of skin-tight trousers, a tighter version of the capris ending at mid-calf or near ankle length, made its way into fashion in the 1960s and were worn with a large belt and slip-on high heels or ballet flat-styled shoes.

Leggings made from a nylon-lycra blend (usually 90% nylon, 10% lycra) have traditionally been worn during exercise. Nylon lycra leggings are often referred to as bicycle or running tights, and are shinier in appearance than those made from cotton. Some have racing stripes or reflective patterns to further distinguish them as athletic wear and provide extra safety. However, beginning in the 1980s exercise-style leggings have also been worn for fashion and as street wear.

Leggings made from cotton-lycra, or a cotton-polyester-lycra combination, are more typically worn for fashion, but are also worn as exercise wear. Cotton-lycra leggings are available in many colors, prints and designs; but black, navy and various shades of gray remain the most commonly worn. Opaque leggings are also common among women, and are sometimes worn without skirts.

Wearing black leggings under long, often diaphanous, skirts was part of a general fashion trend of wearing gym or dance clothes as street wear that evolved along with the fitness craze and under the influence of the movie Flashdance and the long-running Broadway show A Chorus Line. A more recent trend has been the wearing of black leggings with miniskirts.

By the early-1990s, leggings were actually outselling jeans in many parts of the United States. It was very common to see leggings worn with long oversized t-shirts, oversized sweatshirts or oversized sweaters, slouch socks and Keds by girls from toddler age through tween, teen, college age and older. Moms even wore this leggings outfit right along with their daughters. Fashion turned against leggings in the late 1990s.

In 2005, leggings made a "comeback" into high fashion, particularly in indie culture, with capri-length leggings being worn with mini skirts and dresses. Consequently, leggings are also now popular to wear with oversized, long sweaters, denim mini skirt, plaid skirts, short dresses and short shorts. Ballet flats, Converse Chucks, Keds, Sperry Top-Siders, riding boots sometimes with knee socks slouched at the top of the boots and Ugg boots are common footwear with leggings. Leggings are also worn under athletic shorts i.e. Nike Tempo shorts especially in colder weather. Leggings also come in capri length and bike short length. The bike short length is popular under sports uniform shorts and under skirts and dresses as a fashionable item and to keep from showing too much. This trend towards tight pants can alternately be seen in the resurgence of skinny jeans.

Men have also begun to wear leggings more frequently in recent years as long underwear, and for more casual physical activities such as walking, hiking, or gardening, replacing the old standby, sweatpants. Leggings are also worn as a fashion trend by men on the London electro-music scene.

At the Marni Men's show during the Fall 2007 Fashion Week, outfits with leggings designed solely for men were introduced.[2]

Men's leggings, dubbed "meggings" (a portmanteau of the words "men" and "leggings") were presented as the latest fashion trend for men at spring/summer 2011 fashion runways, supposed to be styled and layered beneath shorts and preferably with large, baggy, loose or long tops such as t-shirts.[3]

K-pop idols have been wearing male leggings under shorts as a fashion item since the 2010s.[4] 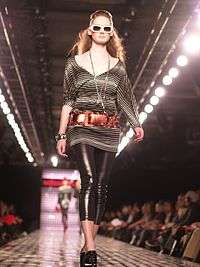 A model wearing shiny leather-look leggings on a catwalk.

Shiny leggings, sometimes called leather-look leggings, have a shiny, metallic (lamé), or wet-like appearance. They emerged as a popular fashion trend in the late-2000s (decade), particularly in 2008 as reported by Stylesignal and other trend forecasters. These leggings are most often a blend of nylon and spandex and come in a variety of colors, although most commonly in black, silver, or gold. These types of leggings are notable for their leather, or even latex-like appearance and are most often worn as evening or clubwear.

Shiny leggings were featured on fashion runways by many leading designers and were further popularized by celebrities such as Lauren Conrad, Kelly Clarkson and Mary-Kate and Ashley Olsen. Popular makers of shiny leggings include Members Only and American Apparel.

Jeggings are a recent variant of leggings. They are leggings that take certain attributes from jeans, such as color and style and particularly a colored seam down the side, thus a mixture of the two and hence the adoption of the name "jeggings". Some styles have taken the jean-like look to such lengths as adding faux pockets and faux zip-flies to add to the look.

Leggings are sometimes worn during sports and other vigorous activities. Runners, dancers, and exercisers may wear them — particularly in cold weather under a sports uniform i.e. in soccer with shin guards and soccer socks over the leggings and under cheerleading uniforms. Leggings have even been worn by a hurling full back.[5]