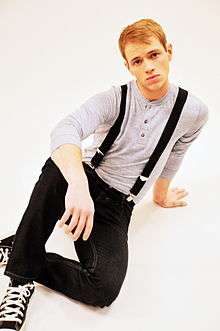 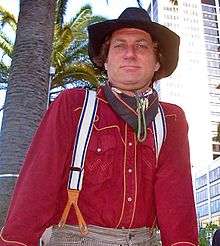 Suspenders (American English, Canadian English) or braces (British English) are fabric or leather straps worn over the shoulders to hold up trousers. The straps may be elasticated, either entirely or only at attachment ends, and most straps are of woven cloth forming an X or Y shape at the back. Suspenders are typically attached to trousers with clips or buttons using leather tabs at the ends. Outside the United States the term suspenders, or suspender belt, refers to a garment used to hold up stockings. This is called a garter belt in American English.

There have been several precursors to suspenders throughout the past 300 years, but modern suspenders were first invented in 1820 by Albert Thurston. They were once almost universally worn, due to the high cut of mid-nineteenth and early twentieth century trousers that made a belt impractical. During the nineteenth century, suspenders were sometimes called galluses.[1][2] Samuel Clemens, known for his work as the author Mark Twain, patented "Adjustable and Detachable Straps for Garments" (ADSG), becoming one of the first to receive a United States patent for suspenders in 1871.[3] After losing popularity during World War I, when men became accustomed to uniform belts, suspenders were still regular attire throughout the 1920s. Because of their image as 'underwear',[4] some men switched to belts during the 1930s as the vests which had hidden suspenders became worn less often. This also signaled the switch in position of securing buttons from the outside of the waistband to the inside. Life magazine stated in 1938 that 60% of American men chose belts over suspenders. Though the return of fuller-cut trousers in the 1940s revived suspenders, they did not dominate over belts again to the same extent. However, in the UK they remained the norm to wear with suits and dress trousers.[4][5]

While suspenders have been in and out of fashion over the last century (alternating with belts in general preference), there has been a brief resurgence in interest, possibly due to the styles seen in films like Wall Street. Many business people, newscasters (such as Larry King in the United States)[6] and professionals[7] such as lawyers also still wear suspenders.

Materials used for making suspenders have also changed over time, with newer additions such as rayon, a hard-wearing synthetic fiber, now offered. The traditional Woolen Boxcloth Suspenders remain available but are very costly, a style often worn by senior lawyers in London. Generally, a high quality rayon with elastic webbing is the fabric used to create suspenders, with silks webbing or tubed suiting cloths from mills such as Dugdale Bros of England also used.[6]

Good quality smart suspenders were traditionally considered white collar, or upper or upper-middle class, wear. They were made to be attached to trousers by buttons sewn onto the waistband.[6] There are relatively few current manufacturers in the UK, but the classic button-on 'reform' end is also quite widely available in the USA.

In traditional or formal settings, it is considered a faux pas to wear both belt and suspenders at the same time,[4][8] though in the past this has not always been the case. Further, suspenders were traditionally considered an undergarment and, as such, were considered inappropriate to be seen.[4] From their time of their invention until World War II, the waistcoat, or a jumper or cardigan for coolness in the summer, covered suspenders to prevent indecency. Similarly, jumpers and jackets kept the shirtsleeves hidden. In the inter-war period, however, men began removing jackets in public, and so this sensibility became eroded over time. It is perhaps only in Britain that a few 'die-hards' still consider it "gauche"[6] to wear, for example, brightly colored suspenders without jacket. Generally, it is now considered acceptable fashion, on both sides of the Atlantic, for men's suspenders to be seen.

The trousers for suspenders have buttons in order to attach the leather tabs; these may be either on the outside, traditionally, or inside of trousers that do not have belt loops. With belt loops, buttons would be sewn on the inside of the waistband. Such trousers might also have a high back in the fishtail shape, though this is not as common now;[6] This style may also have an additional adjustable strap at the back, as well as the two side adjusters placed on most belt-less trousers. Buttons should be placed about 3 to 3.5 inches (7.6 to 8.9 cm) apart, an equal distance from the back seam. At the front, the first button should be set over the main pleat or crease, the second button again about 3 to 3.5 inches (7.6 to 8.9 cm) apart. It is important to place the buttons in the correct position, as trousers with suspenders should be slightly loose to hang correctly.

In the 2000s, it has become fashionable for some younger women to wear suspenders, a style that emerged from Mod styles in the late 1960s through to punk rock and skinhead styles of the late 1970s into the 1980s. One particular exponent of this fashion was Eurythmics vocalist Annie Lennox, whose fashion styling was akin to cross-dressing as a male character, with her dark suit and red suspenders. Unisex fashion not only featured women wearing trousers and suspenders, but men in skirts with suspenders as an accessory .