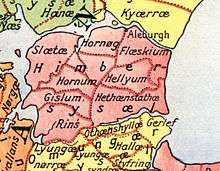 An old map of Himmerland, between the Limfjord and Mariager Fjord in Jutland.

Himmerland is a peninsula in northeastern Jutland, Denmark. It is delimited to the north and the west by the Limfjord, to the east by the Kattegat, and to the south by the Mariager Fjord. The largest city is Aalborg; smaller towns include Hobro, Aars, Løgstør, Støvring and Nibe. In northeastern Himmerland is the Lille Vildmose, Denmark's largest high bog, which sustains a rich bird life of international importance.

It is generally assumed that the name Himmerland is derived from the tribe of the Cimbri since, in the Geography of Ptolemy (2nd century AD), the Kimbroi (in Greek Κίμβροι) are located in the northernmost part of the peninsula of Jutland, called Kimbrikē chersonēsos in Greek (Κιμβρική Χερσόνησος). The Latin c and Greek k attest an earlier stage of Germanic in which the Germanic sound shift was not yet completed (*k > *χ > h), or it has been assumed the Latin form may be derived through Celtic which substituted ch for h (Germanic *himbr-, Celtic *chimbr-, Latin cimbr-).

This article is issued from Wikipedia - version of the 11/29/2014. The text is available under the Creative Commons Attribution/Share Alike but additional terms may apply for the media files.