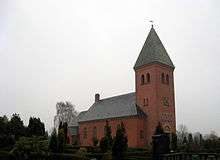 Støvring is a town in Rebild municipality in Region Nordjylland in the geographic region of the Jutland peninsula known as Himmerland in northern Denmark. The town has a population of 6,988 (1 January 2014),[1] and is one of the centres of industry and retailing in the area.

This article is issued from Wikipedia - version of the 5/24/2014. The text is available under the Creative Commons Attribution/Share Alike but additional terms may apply for the media files.