Historically informed performance (also referred to as period performance, authentic performance, or HIP) is an approach to the performance of Western music and theater. Within this approach, the performance adheres to state-of-the-art knowledge of the aesthetic criteria of the period in which the music or theatre work was conceived. Whenever this knowledge conflicts with current aesthetic criteria, the option of re-training the listener/viewer, as opposed to adapting the work, is normally followed. Music is usually played on instruments corresponding to the period of the piece being played, such as period instruments for early music.

Historical treatises, as well as additional historical evidence, are used to gain insight into the performance practice (the stylistic and technical aspects of performance) of a historic era. Corresponding types of acting and scenery are deployed. Historically informed performance has originated in the performance of Medieval, Renaissance, and Baroque music, but has come to encompass music from the Classical and Romantic eras as well. Quite recently, the phenomenon has begun to affect the theatrical stage, for instance in the production of Baroque opera.

There are some critics who contest the methodology of the HIP movement, contending that its selection of practices and aesthetics are a product of the 20th century and that it is ultimately impossible to know what performances of an earlier time sounded like.

Historically informed performance needs to access musical instruments corresponding to the period of the music being played. This has led to the revival of musical instruments entirely gone out of practice, and to a reconsideration of the role and structure of instruments also used in current practice. 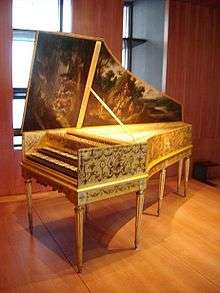 During the second half of the 18th century, the fortepiano gradually replaced the harpsichord. Many harpsichords were destroyed; indeed, the Paris Conservatory is notorious for having used harpsichords for firewood during the French Revolution and Napoleonic times.[1] Composers such as François Couperin, Domenico Scarlatti, Girolamo Frescobaldi, and Johann Sebastian Bach wrote for the harpsichord, clavichord, and organ.

From largest to smallest, the viol family consists of:

Among the foremost modern players of the viols are Paolo Pandolfo, Wieland Kuijken, Jordi Savall, John Hsu, and Vittorio Ghielmi. There are many modern viol consorts.

Recorders in multiple sizes (contra-bass, bass, tenor, alto, soprano, the sopranino, and the even smaller kleine sopranino or garklein) are often played today in consorts of mixed size. Handel and Telemann, among others, wrote solo works for the recorder. Arnold Dolmetsch did much to revive the recorder as a serious concert instrument, reconstructing a "consort of recorders (descant, treble, tenor and bass) all at low pitch and based on historical originals."[2]

A few of the singers who have contributed to the historically informed performance movement are Emma Kirkby, Max van Egmond, Julianne Baird, Nigel Rogers, and David Thomas.

Historic pictures,[3] layout sketches and sources give information about the layout of singers and instruments. Three main layouts are documented:

Johann Mattheson: "The singers must stand alltime in front".[4]

Some familiar difficult items are as follows:

Some information about how music sounded in the past can be obtained from contemporary mechanical instruments. For instance, the Dutch Museum Speelklok owns an 18th-century mechanical organ of which the music programme was composed and supervised by Joseph Haydn.[10]

The baroque oboist Bruce Haynes has extensively investigated surviving wind instruments and even documented a case of violinists having to retune by a minor third to play at neighboring churches.[11]

As in literature, where early poetry or prose can be accessed both through the original text and through a paraphrase or a metaphrase in modern language[12] Prior to audio and video recording, no direct record of performing arts survives. Opinions on the implications of these motivations and on how they should translate into criteria for historically informed performance vary.[13]

Even within the early music revival, awareness of the pitfalls was clear. Though championing the need (for example in his editorship of Scarlatti sonatas) for a thoroughly informed approach, not least in understanding as fully as possible a composer's actual wishes and intentions in their historical context, Ralph Kirkpatrick, while pioneering the harpsichord rediscovery, highlights the risk of using historical exoterism to hide technical incompetence: "too often historical authenticity can be used as a means of escape from any potentially disquieting observance of esthetic values, and from the assumption of any genuine artistic responsibility. The abdication of esthetic values and artistic responsibilities can confer a certain illusion of simplicity on what the passage of history has presented to us, bleached as white as bones on the sands of time."[14]

Classical recording producer Michael Sartorius writes: "While the debate on authenticity in baroque performance will continue, certain essential characteristics should be present, if the performance is to reflect the true baroque spirit."[15]

A number of scholars see the HIP movement essentially as a 20th-century invention. Writing about the periodical Early Music (one of the leading periodicals about historically informed performance), Peter Hill noted "All the articles in Early Music noted in varying ways the (perhaps fatal) flaw in the 'authenticity' position. This is that the attempt to understand the past in terms of the past is—paradoxically—an absolutely contemporary phenomenon."[16]

One of the more skeptical voices of the historically informed performance movement has been Richard Taruskin. His thesis is that the practice of unearthing supposedly historically informed practices is actually a 20th-century practice influenced by modernism and, ultimately, we can never know what music sounded like or how it was played in previous centuries. "What we had been accustomed to regard as historically authentic performances, I began to see, represented neither any determinable historical prototype nor any coherent revival of practices coeval with the repertories they addressed. Rather, they embodied a whole wish list of modern(ist) values, validated in the academy and the marketplace alike by an eclectic, opportunistic reading of historical evidence."[17] "'Historical' performers who aim 'to get to the truth'...by using period instruments and reviving lost playing techniques actually pick and choose from history's wares. And they do so in a manner that says more about the values of the late twentieth century than about those of any earlier era."[18]

Daniel Leech-Wilkinson concedes that much of the HIP practice is based on invention: "Historical research may provide us with instruments, and sometimes even quite detailed information on how to use them; but the gap between such evidence and a sounding performance is still so great that it can be bridged only by a large amount of musicianship and invention. Exactly how much is required can easily be forgotten, precisely because the exercise of musical invention is so automatic to the performer."[19] Leech Wilkinson concludes that performance styles in early music "have as much to do with current taste as with accurate reproduction."[20]

In her book The Imaginary Museum of Musical Works: An Essay in the Philosophy of Music, Lydia Goehr discusses the aims and fallacies of both proponents and critics of the HIP movement.[21] She notes that the HIP movement itself came about during the latter half of the 19th century as a reaction to the way modern techniques were being imposed upon music of earlier times. Thus performers were concerned with achieving an “authentic” manner of performing music—a 19th-century ideal that carries implications for all those involved with music. She distills the late 20th century arguments into two points of view, achieving either fidelity to the conditions of performance, or fidelity to the musical work (her book is concerned with the idealization of the musical work).[22]

She succinctly summarizes the critics’ arguments (for example, anachronistic, selectively imputing current performance ideas on early music), but then concludes that what the HIP movement has to offer is a different manner of looking at and listening to music: "It keeps our eyes open to the possibility of producing music in new ways under the regulation of new ideals. It keeps our eyes open to the inherently critical and revisable nature of our regulative concepts. Most importantly, it helps us overcome that deep‐rooted desire to hold the most dangerous of beliefs, that we have at any time got our practices absolutely right."[23]