History of aviation in Bangladesh

The history of aviation in pre-1947 India began with kites, the traditional heavier-than-air man-made object that is flown by one or more people while staying on the ground. The first recorded manned flight was arranged by the Dhaka Nawab Family in 1882, which resulted in the death of the flyer.

Kite flying was one of the many different forms of entertainment of the elite people of Dhaka, since the Mughal period. It became a festive tradition during the period of Nayeb-e-Nazim Nawajesh Mohammad Khan in the 1740s.[1] Kite flying is still a popular pastime in Bangladesh, especially right after the monsoon.[2] In the older parts of Dhaka it is one of the most popular activities.[3] Kite painting was a specialized art form in the 18th century in Bangladesh.[4] Some kites of Bengal has been known to keep flying for three months. They were big kites tied to anchors with stout ropes.[5]

Kite flying festival had long been a major festival. The Chaitra Sankranti festival (known as Shakrain or Hakrain in Old Dhaka[6]) is celebrated every year in the last day of the Bengali calendar (30th Choitro, mid April). It is a major event for competitive kite flying and boat racing.[7] Combating fighter kite flyers trying to slash each other's carefully sharpened kite-string is a major part of the competition.[8] In West Bengal the major kite flying festival happens on the day of Makar Sankranti or end of winter (mid January), and Vasant Panchami (late February).[9][10] 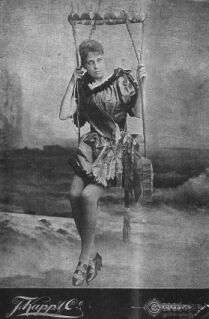 Jeanette Van Tassel, a young balloonist from the United States, was hired by the then incumbent Nawab Khwaja Ahsanullah. She was a member of a family troupe of professional balloonists and arrived with her mother, Jenny Rumary Van Tassel. At 6.20pm on 16 March 1892, she set off to fly from the southern bank of the River Buriganga to the roof of Ahsan Manzil, lying across the river. But a gusting wind carried her off to the gardens of Shahbag, where her balloon became stuck in a tree. She was killed in her fall to the ground, and lies interred in the Christian graveyard at Narinda, Dhaka.[11][12]

Thunderbolts of No. 30 Squadron RAF taxiing past a line of Hawker Hurricane Mark IICs, at Cox's Bazar 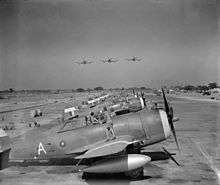 Thunderbolt Mark Is of No. 135 Squadron RAF lined up, being overflown by three other Thunderbolts at Chittagong

Modern aviation in modern Bangladesh area began when the British Government of India built a Royal Indian military airstrip in Tejgaon during World War II to fly warplanes towards the battle fields of Kohima and war theaters in Burma.[13] Other airstrips were built in Comilla, Feni, Chittagong, Cox's Bazar, Chakaria, Sylhet, Jessore, Rajshahi and Lalmonirhat.

In August 1943, a South Asia Command was formed under Admiral Mountbatten, including the RAF Third Tactical Air Force (Third TAF), which launched the second Burma Campaign against the Empire of Japan in the December that year. The Royal Indian Airforce (RIAF), Indian part of the Royal Air Force played a crucial role by providing tactical reconnaissance and extensive close support to the army when a British Corps started advancing down the Arakan coast in January 1944.

In November 1943, 6 Squadron and later 8 Squadron were moved to Cox's Bazaar.[14][15] By the end of February 1944, No 6 Squadron pilots had completed over 1,000 operational sorties, averaging 6 sorties a day per pilot, a record for the entire the Third TAF. Towards the end of March 1944, 4 Squadron joined the operations when it was moved first to Feni airfield, and then to Comilla in June to replace 6 Squadron.[16]

In May, 9 Squadron was moved to Comilla after a brief spell of tactical reconnaissance duties supporting the battles of Imphal and Kohima.[17] During August 1944, the two squadrons carried out intensive bombing of Japanese positions in the Sangu River valley, specially for three consecutive days in Labawa to support an offensive by 81 Division to expel the Japanese from the area. By the end of December 1944, 10 Squadron had also been moved into the operational area at Ramu. With the fall of Rangoon on 3 May 1945, the operations in Burma were reduced to mopping up of small pockets of resistance. By the end of June most of the Royal Air forces squadrons were withdrawn, leaving only 8 Squadron to assist in the mopping up.

The Shahjalal International Airport originated in 1941, during the second world war, as the British government built a landing strip at Kurmitola, several kilometers north of Tejgaon, as an extra landing strip for the Tejgaon Airport. At that time Tejgaon was a military airport, to operate warplanes towards the war fields of Kohima (Assam) and Burmese war theatres.[13] Shah Amanat International Airport was a combat airfield as well as a supply point and photographic reconnaissance base by the United States Army Air Forces Tenth Air Force during the Burma Campaign 1944-1945.[18] Known American units assigned to Chittagong were: 80th Fighter Group, flew P-38 Lightning fighters over Burma between March 1944 and February 1945; 8th Reconnaissance Group, between October and December 1944 (various detachments); and 4th Combat Cargo Group, flew C-46 Commando transports between January and June 1945. Osmani International Airport in Sylhet was built during British rule as Sylhet Civil Airport, partly to check Japanese aggression from Burma. Biman Bangladesh Airlines earns most of its revenue from this airport.[19] 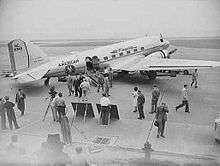 When the war was over, the colonial government decided to build the Tejgaon Airport along with a landing strip at Kurmitola to meet the needs of a Royal Indian Air Force (RIAF) station in Dhaka. In 1946, the Mirza Ahmad Ispahani and his partners formed an airline - Orient Airways - which soon started using the airport as a civil airport.[13] Shifting its base from Kolkata to Karachi when Pakistan was born, Orient Airways started DC-3 flights from Karachi to Dhaka on 7 June 1954, forming a critical connection between the capitals of geographically separated East and West Pakistan. On March 11, 1955, Orient Airways merged with the government's proposed airline, becoming Pakistan International Airlines Corporation, later rechristened as Pakistan International Airlines (PIA).

In 1947, British granted independence to India and created Pakistan (Partition of India), in Pakistan the ares of modern-day Bangladesh were included.

The Eastern Pakistan Flying Club was established in 1948. By 1960, British Overseas Airways Corporation and Pan American Airways had started operating flights out of Dhaka, PIA had started operating Boeing 707 and Vickers VC10 jet services, and new airports had been established out of former Royal Air Force stations at Jessore, Chittagong, Thakurgaon, Ishwardi, and Comilla.[13] During the 1962 Sino-Indian War, services to East Pakistan (now Bangladesh) were proving to be difficult, therefore PIA placed their Sikorsky S-61 helicopters on these routes until 1966 when conditions improved. In the 1971 war, PIA aided the Pakistan Army by transporting soldiers to East Pakistan in the Indo-Pakistani War of 1971 and lost a couple of its aircraft to Indian Air Force fighters.[20] Between 10 and 13 March, immediately before the war started, Pakistan International Airlines cancelled all their international routes to urgently fly "Government Passengers" to Dacca. These "Government Passengers" were almost all Pakistani soldiers in civilian dress. 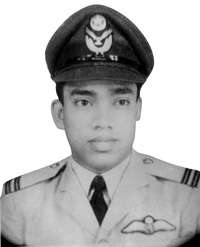 During the 1971 Liberation War of Bangladesh Indian Air Force (IAF) and the Pakistan Air Force (PAF) fought had extensive engagements in the sky over Bangladesh. The first engagement was on 22 November over the Salient of Boyra in West Bengal.[21] In the process Tejgaon Airport suffered extensive damage.

Then, on the night of 3 December 1971, Canberra bombers of Eastern Air Command struck Tejgaon, which was guarded by PAF No. 14 squadron equipped with Sabre jets which lacked night fighting capability. By the morning of 4 December, strike missions against Tejgaon were assigned to 11 IAF squadrons, including Hunters of the No. 7 Squadron, No. 14 Squadron, No. 17 Squadron and No. 37 Squadron of IAF, as well as Su-7s of No. 221 Squadron and MiG-21s of No. 28 Squadron.

Throughout 4 and 5 December, IAF concentrated in attacking the aircraft on the ground. But, it failed to cause significant damage to the PAF assets in well-dispersed and camouflaged locations. By the evening of 5 December, the IAF changed tactics. On the morning of 6 December four MiG-21s (No. 28 Sqn), flying from Gauhati hit Tejgaon with 1000lber, scoring several hits on the runway. Kurmitola was attacked on the morning of 7 December, when Mig-21s of No. 28 Sqn again hit the runway. No. 7 Sqn was pulled out of the eastern ops on the 6 December to help the Indian Army in the west. Repeated attack by MiG-21s and Hunters of No. 14 and No.28 however, kept the runway cratered. The IAF assault effectively grounded the PAF by 7 December, and No. 14 Squadron was taken out of the war.[23] The IAF also bombed other airfields including the abandoned WWII airfields of Comilla, Lalmanirhat and Shamsher Nagar through the war, denying their use to PAF.

On August 20, 1971 Flight Lieutenant Matiur Rahman attempted to pilot a T-33 trainer from Karachi, Pakistan to India in order to defect from the Pakistan Air Force and join the liberation movement of Bangladesh. However, Matiur could not take the plane out of Pakistani territory, as reportedly, Pilot Officer Rashid Minhas, the other pilot in the plane, forced it to crash in Thatta, a place near the Indian border.[24] Matiur was awarded Bir Sreshtho and Minhas was awarded Nishan-E-Haider, respectively the highest military honors in Bangladesh and Pakistan, and both has air bases named after them, respectively in Jessore and Kamra.[25]

Biman Bangladesh Airlines was formed with one Boeing 707 left behind by PIA.

The Bangladesh Air Force (BAF) was formed at Dimapur, Nagaland, India on 28 September 1971 under the command of Air Commodore AK Khondakar (later Air Vice Marshal and Chief of Air Staff, Bangladesh Air Force). At that time, the nucleus of the (BAF) was formed as 'Kilo Flight' to assist the Mukti Bahini (Freedom Fighters). Initially, 'Kilo Flight' consisted of three aircraft provided by the Indian Air Force, 09 officers and 47 airmen. Squadron Leader Sultan Mahmud (retired as Air Vice Marshal and Chief of the Air Staff of BAF) was appointed as the commander of 'Kilo Flight'. After having some basic training on air to ground weapon delivery, 'Kilo Flight' successfully bombed a fuel storage in Chittagong and Narayangonj area and thus the journey of BAF had commenced. During the last phase of the Bangladesh Liberation War the newly formed Bangladesh Air Force carried out 12 successful attack missions over Pakistani targets.[26]

After liberation in 1971, the Bangladesh Air Force received equipment from the Soviet Union and the People's Republic of China—a clutch of Mikoyan-Gurevich MiG-21 fighters; Antonov An-24 and Antonov An-26 transport aircraft; and Mil Mi-4 helicopters.

Shahjalal International Airport started operation in 1981. It is the home base and hub of Biman Bangladesh Airlines, GMG Airlines and United Airways.

The following is a list of all the aviation incidents and accidents that have occurred in Bangladesh as well as East Pakistan.