The notion of homotopy of paths was introduced by Camille Jordan.[1]

In modern mathematics it is common to study a category by associating to every object of this category a simpler object that still retains a sufficient amount of information about the object in question. Homotopy groups are such a way of associating groups to topological spaces. 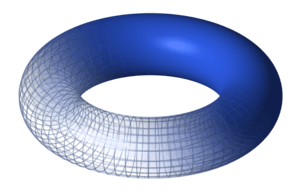 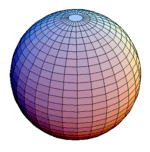 That link between topology and groups lets mathematicians apply insights from group theory to topology. For example, if two topological objects have different homotopy groups, they can't have the same topological structure—a fact that may be difficult to prove using only topological means. For example, the torus is different from the sphere: the torus has a "hole"; the sphere doesn't. However, since continuity (the basic notion of topology) only deals with the local structure, it can be difficult to formally define the obvious global difference. The homotopy groups, however, carry information about the global structure.

As for the example: the first homotopy group of the torus T is

because the universal cover of the torus is the complex plane C, mapping to the torus T ≅ C / Z2. Here the quotient is in the category of topological spaces, rather than groups or rings. On the other hand, the sphere S2 satisfies

Hence the torus is not homeomorphic to the sphere.

In the n-sphere Sn we choose a base point a. For a space X with base point b, we define πn(X) to be the set of homotopy classes of maps

that map the base point a to the base point b. In particular, the equivalence classes are given by homotopies that are constant on the basepoint of the sphere. Equivalently, we can define πn(X) to be the group of homotopy classes of maps g : [0,1]n → X from the n-cube to X that take the boundary of the n-cube to b. 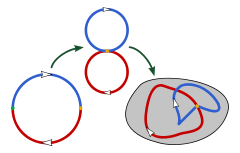 Composition in the fundamental group

For n ≥ 1, the homotopy classes form a group. To define the group operation, recall that in the fundamental group, the product f ∗ g of two loops f and g is defined by setting

If n ≥ 2, then πn is abelian. (For a proof of this, note that in two dimensions or greater, two homotopies can be "rotated" around each other. See Eckmann–Hilton argument). Further, similar to the fundamental group, for a path connected space any two basepoint choices gives rise to isomorphic πn (see Allen Hatcher#Books section 4.1).

Long exact sequence of a fibration

Let p: E → B be a basepoint-preserving Serre fibration with fiber F, that is, a map possessing the homotopy lifting property with respect to CW complexes. Suppose that B is path-connected. Then there is a long exact sequence of homotopy groups

In the case of a cover space, when the fiber is discrete, we have that πn(E) is isomorphic to πn(B) for all n greater than 1, that πn(E) embeds injectively into πn(B) for all positive n, and that the subgroup of π1(B) that corresponds to the embedding of π1(E) has cosets in bijection with the elements of the fiber.

For some spaces, such as tori, all higher homotopy groups (that is, second and higher homotopy groups) are trivial. These are the so-called aspherical spaces. However, despite intense research in calculating the homotopy groups of spheres, even in two dimensions a complete list is not known. To calculate even the fourth homotopy group of S2 one needs much more advanced techniques than the definitions might suggest. In particular the Serre spectral sequence was constructed for just this purpose.

Certain Homotopy groups of n-connected spaces can be calculated by comparison with homology groups via the Hurewicz theorem.

There are also relative homotopy groups πn(X,A) for a pair (X,A), where A is a subspace of X. The elements of such a group are homotopy classes of based maps Dn → X which carry the boundary Sn−1 into A. Two maps f, g are called homotopic relative to A if they are homotopic by a basepoint-preserving homotopy F : Dn × [0,1] → X such that, for each p in Sn−1 and t in [0,1], the element F(p,t) is in A. The ordinary homotopy groups are the special case in which A is the base point.

These groups are abelian for n ≥ 3 but for n = 2 form the top group of a crossed module with bottom group π1(A).

There is a long exact sequence of relative homotopy groups, it can be obtained via the Puppe sequence.

The homotopy groups are fundamental to homotopy theory, which in turn stimulated the development of model categories. It is possible to define abstract homotopy groups for simplicial sets.