An Honorary Prelate of His Holiness is a priest to whom the Pope has granted this title. They are addressed as Monsignor and have certain privileges as regards ecclesiastical dress.[1][2] 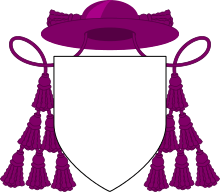 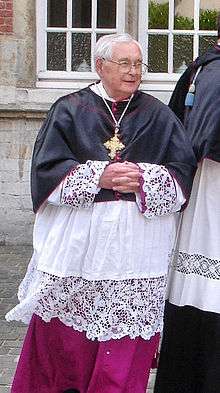 Before the motu proprio Pontificalis Domus of 28 March 1968, Honorary Prelates were called Domestic Prelates (in Latin, Antistites Urbani), a title that then also went with certain offices such as that of Archbishop or Bishop Assistant at the Throne or membership of the Roman Prelature, and that was also maintained by Archbishops, Bishops and Apostolic Protonotaries who had been awarded it before their appointment to those positions.[3]

Today, as well as those to whom the award is granted individually, generally at the request of their bishops, the following are ex officio Honorary Prelates:

With the reforms of Pontificalis Domus, Honorary Prelates were made the second of three ranks of Monsignors. However, Pope Francis, in 2014, decreed[4] that (allegedly to cut down on clerical "careerism") there would be only one class of Monsignor, the lowest, Chaplain of His Holiness (formerly called Papal Chamberlain, and the category right below Honorary Prelate), and that it would be awarded only to those diocesan priests who were at least 65 years old (these changes did not affect those priests serving in the Roman Curia; religious order priests can be named Bishops but are not given largely honorary titles such as Monsignor). The higher two categories would be abolished for diocesan priests, but the change is not retroactive—those who have the three grades can still keep them (but they will not be raised to a higher grade).