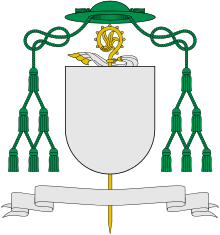 The coat of arms of a territorial abbot are distinguished by a green galero with twelve tassels and a gold crozier with a veil attached.

Normally an abbot is the superior of an abbey (a monastery), and exercises authority over a religious family of monks or canons. His authority extends only as far as the monastery's walls, or only to the monks who have taken their vows in his monastery. A territorial abbot - also called an abbot nullius diœceseos, Latin "belonging to no diocese", or abbreviated abbot nullius - functions additionally as the ecclesiastical ordinary for the Catholics and parishes within a defined territory around the monastery, in much the same way a bishop does for a diocese.

The practice arose in part because abbeys served the spiritual needs of Catholics who lived near the monastery, especially in mission territories. The monastery's own chapel was a space of public worship for the laity who had settled nearby, and the monks could also serve as parish clergy in churches near the monastery. The abbot of the monastery, although having received only the priesthood in the sacrament of Holy Orders, was invested with the same administrative authority under canon law as a diocesan bishop for a given territory around the abbey. Thus, with the exception of conferring ordination on priests, the territorial abbot could do almost everything a diocesan bishop would for those under his care, including incardinate (that is, enroll under his jurisdiction) even non-monastic priests and deacons for service in parishes. The territorial abbot, like other abbots and archabbots, had the right to use an episcopal coat of arms and to wear the mitre, the crosier, the ring, and the pectoral cross; if the abbot had been ordained to the episcopacy (very rare), he had the power to ordain his religious who were candidates to the transitional and permanent diaconate and to the priesthood, though they usually had to attend a seminary house of formation located outside the abbot's territory.

Though territorial (like other) abbots are elected by the monks of their abbey, a territorial abbot can only receive the abbatial blessing and be installed under mandate from the pope, just as a bishop cannot be ordained and installed as ordinary of a diocese without such a mandate.

After the Second Vatican Council, more emphasis has been placed on the unique nature of the episcopacy and on the traditional organization of the church into dioceses under bishops. As such, abbeys nullius have been phased out in favor of the erection of new dioceses or the absorption of the territory into an existing diocese. A few ancient abbeys nullius still exist in Europe, and one in Korea.

There are 11 remaining territorial abbeys, as listed in the Annuario Pontificio of the Vatican:

In Italy the following abbeys have been united with a diocese:

Historically there have been more, such as: