This article is about religious acolytes. For other uses, see Acolyte (disambiguation). 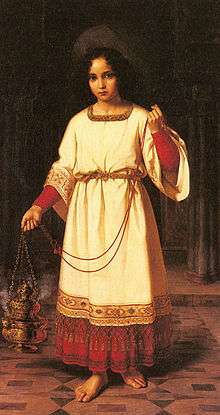 The Acolyte by Abraham Solomon, 1842

In many Christian denominations, an acolyte is anyone who performs ceremonial duties such as lighting altar candles. In others, the term is used for one who has been inducted into a particular liturgical ministry, even when not performing those duties.

The word acolyte is derived from the Greek word ἀκόλουθος (akolouthos), meaning an attendant, via Late Latin acolythus.

An Armenian acolyte holding a ripida

In the Eastern Orthodox Church and Eastern Catholic Churches, the nearest equivalent of acolyte is the altar server. At one time there was a rank of minor clergy called the taper-bearer responsible for bearing lights during processions and liturgical entrances. However, this rank has long ago been subsumed by that of the reader and the service for the tonsure of a reader begins with the setting-aside of a taper-bearer.

The functions of an acolyte or taper-bearer are therefore carried out by readers, subdeacons, or by non-tonsured men or boys who are sometimes called "acolytes" informally. Also, the term "altar-boys" is often used to refer to young altar servers. Subdeacons wear their normal vestments consisting of the sticharion and crossed orarion; readers and servers traditionally wear the sticharion alone.

In recent times, however, in many of the North American Greek Orthodox Churches, for the sake of uniformity, readers have been permitted to wear the orarion (The Bishop presents the reader, who is to serve on the altar, with the orarion). Readers do not cross the orarion while wearing it, the uncrossed orarion being intended to slightly distinguish a reader from a subdeacon.

In the Russian tradition, readers wear only the sticharion, and do not wear the orarion unless they have been specially blessed to by their bishop. (This might be done if a reader must occasionally serve in the role of a subdeacon, or for some other reason the bishop believes is fitting.) If a server has not been tonsured, he must remove the sticharion before he can receive Holy Communion.

In the early church, a taper-bearer was not permitted to enter the sanctuary, only a subdeacon or above was allowed to go in. Nowadays, however, servers are permitted to go in, but they are not permitted either to touch the Holy Table or the Table of Oblation.

Instituted acolytes assisting at the dedication of an altar

Until 1972, the acolyte was the holder of the highest of four minor orders. By Pope Paul VI's motu proprio Ministeria quaedam of 15 August 1972, the term "minor orders" has been replaced by that of "ministries".[1] Two such ministries, those of reader and acolyte are to be kept throughout the Latin Church.[2] A prescribed interval, as decided by the Holy See and the national episcopal conference, is to be observed between receiving them.[3] Candidates for diaconate and for priesthood must receive both ministries and exercise them for some time before receiving holy orders.[4] The two ministries are not reserved solely for candidates for holy orders,[5] but can be conferred- in their formal, institutional permanent form- only on men.[6] The ministries are conferred by the ordinary: either a bishop or, in the case of clerical religious institutes, a major superior.[7]

The motu proprio assigned to the acolyte the functions previously reserved for the subdeacon, and national episcopal conferences are free to use the term "subdeacon" in place of that of "acolyte".[8] The functions of the acolyte are specified in the motu proprio,[9] and have been indicated also in the General Instruction of the Roman Missal, no. 98, which says: "The acolyte is instituted to serve at the altar and to assist the priest and deacon. In particular, it is his responsibility to prepare the altar and the sacred vessels and, if it is necessary, as an extraordinary minister, to distribute the Eucharist to the faithful. In the ministry of the altar, the acolyte has his own functions (cf. nos. 187-193), which he must perform personally."[10]

The General Instruction of the Roman Missal adds: "In the absence of an instituted acolyte, lay ministers may be deputed to serve at the altar and assist the priest and the deacon; they may carry the cross, the candles, the thurible, the bread, the wine, and the water, and they may also be deputed to distribute Holy Communion as extraordinary ministers."[11]

The term "instituted acolyte", which does not appear in the 1972 motu proprio, is used in the General Instruction of the Roman Missal to distinguish those on whom the ministry has been conferred with the prescribed rite from others who, while sometimes called acolytes, are less ambiguously referred to as altar servers. While, in the absence of an instituted acolyte, an altar server (male or female) may perform most of an acolyte's functions, some are reserved for an instituted acolyte alone. Thus only an instituted acolyte is authorized to purify, wipe and arrange the sacred vessels after Holy Communion.[12] 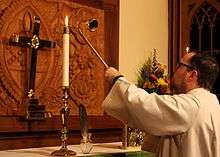 An acolyte can assist in worship by carrying a processional cross, lighting candles, holding the Gospel book, holding candles or "torches", assisting a deacon or priest set up and clean up at the altar, swinging a censer or thurible[13] or carrying the incense boat, handing the offering plates to ushers, and many other tasks as seen fit by the priest or acolyte warden.

In Anglo-Catholic churches acolytes commonly wear cassock and cotta, and in less Anglo-Catholic churches commonly cassock-alb with girdle. A girdle is usually a twisted rope with knots on the ends which is secured round the waist; it may be white or of the liturgical colour. Wearing crosses or other special pins or symbols is the prerogative of the individual church.

In some more 'traditional' parishes, the acolytes are ranked as they develop their abilities to serve: Trainees, Junior Acolytes, Senior Acolytes, and Acolytes of Merit. In others, the functions of acolytes are performed without vestments, and without significant formal training by persons available in the parish.

In other parishes, Acolytes are referred to according to the roles they perform. E.g. Master of Ceremonies, Crucifer and Thurifer, together with the 1st and 2nd Acolytes.

In the Methodist and Lutheran traditions, acolytes participate in the worship service by carrying a processional cross or crucifix (these acolytes are called crucifers), lighting and extinguishing the altar candles, and ringing the church bell to call the congregation to worship. In these traditions, the lighting of the altar candles in the worship service is a symbol of Jesus’ coming into the presence of the worshiping community. Before lighting the candles the acolyte may bow at the altar out of respect. Before the extinguishing of the last altar candles, the acolytes relight their "candle lighter" and then process out into the narthex. This symbolizes that Jesus Christ is for all people everywhere. It also symbolizes the light of Jesus Christ going out into the world where believers are called to serve.[14] Similar to those in the Anglican tradition, acolytes in these traditions wear robes called albs, sometimes with a cincture. It is also common for Methodist acolytes to wear the traditional cassock and cotta.