Howard Winstone, MBE (15 April 1939 – 30 September 2000) was a Welsh world champion boxer, born in Merthyr Tydfil, Wales. As an amateur, Winstone won the Amateur Boxing Association bantamweight title in 1958, and a Commonwealth Games Gold Medal at the 1958 British Empire and Commonwealth Games in Cardiff.

In his early amateur days Winstone was very much a two-fisted fighter, but as a teenager, whilst working in a local toy factory, he lost the tips of three fingers on his right hand in an accident. As a result, he lost much of the punching power in his right hand and so had to change his style to rely much more on a straight left.

Representing Wales at the 1958 British Empire and Commonwealth Games in Cardiff, Winstone won the gold medal at bantamweight.[1] Winstone won the first of his three BBC Wales Sports Personality of the Year awards the same year (1958) – winning his second in 1963 and his third in 1967.[2] 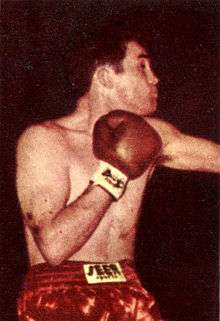 Winstone made his professional debut in February 1959 at Wembley Stadium, London, when he beat Billy Graydon on points over six rounds. He then proceeded to win his first 24 fights, at which point he was considered ready for a shot at the British featherweight title.

In May 1961 he fought Terry Spinks the holder of the British featherweight title at the Empire Pool, Wembley. He out-boxed Spinks, forcing him to retire after ten rounds, and so claimed the British title.

His first defeat came in November 1962 his 35th fight after 34 straight wins. He was beaten by Leroy Jeffery, an American featherweight, by a technical knockout in the second round after having been knocked down three times.

In January 1963, he defended his British title for the third time, defeating Johnny Morrisey by a technical knockout in the eleventh, in Glasgow.

In July 1963, he challenged for the European featherweight title, fighting Italian holder, Alberto Serti in Cardiff. Winstone won the title when the referee stopped the fight in the fourteenth round.

In January 1964 he suffered only his second defeat in 45 fights, losing to the American, Don Johnson.

In May 1964 he defended his European title against Italian, Lino Mastellaro at the Empire Pool, winning by a technical knockout in the Eighth round.

In January 1965 he defended his European title again, against Frenchman, Yves Desmarets in Rome. He won on points over fifteen rounds.

In September 1965 he challenged for the WBA and WBC world featherweight titles held by the Mexican southpaw, Vicente Saldivar. The fight was held at Earls Court Arena, London and Saldivar won on points over fifteen rounds.

In December 1966 he defended his British and European titles against the Welsh featherweight, Lennie Williams, defeating him at Port Talbot in eight rounds.

In June 1967 he was ready for another world title challenge against Vicente Saldivar, this time in Cardiff, but again lost on points, although the decision favoured Saldivar by only half a point.

Four months later, in October 1967, he fought Saldivar again, this time in Mexico City, but lost after being knocked down in the seventh and twelfth rounds. His manager threw in the towel in the twelfth.

After his latest successful defence, Saldivar announced his retirement leaving his world title vacant. In January 1968, Winstone fought the Japanese, Mitsunori Seki for the vacant WBC world featherweight title at the Royal Albert Hall. He won when the fight was stopped in the ninth due to a cut eye, and so finally gained a world title. Saldivar was in the audience to see his vacated title won by his old rival.

In July 1968 he defended his newly won world title against the Cuban, Jose Legra, at Porthcawl, Wales. Although Winstone had beaten Legra twice before, he was knocked down twice in the first round. He continued fighting, but unfortunately he sustained a badly swollen left eye, which caused the bout to be stopped in the fifth round. Having lost the world title in his first defence, Winstone decided to retire at the age of 29. 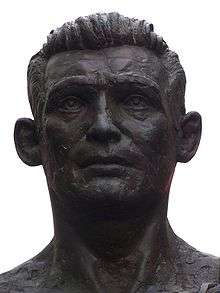 He continued living in Merthyr Tydfil after retirement. In 1968 he was awarded the MBE.[3] Later, he was made a Freeman of Merthyr Tydfil due to his boxing accomplishments. He died from kidney disease on 30 September 2000, aged 61.

In 2001, one year after his death, a bronze statue of Winstone by Welsh sculptor David Petersen was unveiled in St. Tydfil's Square, Merthyr Tydfil.[4]

In 2005, he beat Owen Money, Richard Trevithick, Joseph Parry and Lady Charlotte Guest to be named "Greatest Citizen of Merthyr Tydfil", in a public vote competition run by Cyfarthfa Castle and Museum as part of the centenary celebrations to mark Merthyr's incorporation as a county borough in 1905.

His brother, Glyn Winstone continues to run a café business in the town's bus station under the boxing-themed trading-style "The Lonsdale Bar".