Nicole Denise Cooke, MBE (born 13 April 1983) is a Welsh former professional road bicycle racer and Commonwealth, Olympic and World road race champion. Cooke announced her retirement from the sport on 14 January 2013 at the age of 29.[3][4]

Cooke turned professional for the Spanish-Ukrainian Deia-Pragma-Colnago team at the start of the 2002 season,[12] basing herself in Forli, Italy where she shared a house with Australian rider and future Wiggle High5 founder Rochelle Gilmore[13] and learned Italian.[14]

In her first professional season in 2002, Cooke won races in Italy, France and the Netherlands,[15][16] and won the road race in the 2002 Commonwealth Games.[17] Cooke said her strength left her in her first Tour de France, aged 19, and a meeting in the team campervan suggested "medicines" to help her.[3] She refused them.[3] The Deia-Pragma-Colnago team did not pay wages to Cooke and some colleagues. The team took Cooke's racing bicycle ahead of the world road championships in October and then returned it in time for the World Championships following a telephone call from Ernesto Colnago.[18] Nicole was runner-up in the BBC Wales Sports Personality of the Year competition.

Cooke signed for the Acca Due O Team for 2003 and a new UCI regulation limiting team sizes split the Acca Due O squad in two for 2003 so Cooke rode for the new Ausra Gruodis-Safi Team with many of the younger riders.[19] She rode for the merged and renamed Safi-Pasta Zara Manhattan Team in 2004 and 2005.

In 2003 Cooke won La Flèche Wallonne Féminine, the Amstel Gold, the GP de Plouay and the GP San Francisco. She was the 2003 UCI Women's Road World Cup champion, youngest to win the competition and the first Briton. She came third in the world road championship. Cooke was voted BBC Wales Sports Personality of the Year. She hit a stationary police motorbike in June at the Tour du Grand Montréal[20] required stitches in her left knee.[21] Three weeks later she crashed again at the Giro de Trentino[22] and had to miss 4 weeks of racing in July and August.

A winter and spring of rehabilitation failed to cure the recurring knee problem and she had surgery in May.[23] At the end of June in her first race in eight months, she won her fifth British title.[24] The following month Cooke won the Giro d'Italia Femminile, the youngest winner and the first British cyclist, male or female, to win a Grand Tour.[25] At the 2004 Summer Olympics she placed fifth in the women's road race and 19th in the road time trial.

In 2005 she again won La Flèche Wallonne Féminine. She also won the GP Wallonie, Trofeo Alfredo Binda and the Trofeo Citta di Rosignano. She came second in the world championship.

In December 2005, preparing for the 2006 Commonwealth Games, she broke a collarbone during the Manchester leg of the UCI Track World Cup;[29] despite this, she came third in the road race at the Games in March 2006.[30]

On 1 August 2006 Cooke took over as number 1 on the UCI's women's world road race rankings.[31] On 3 September 2006 she secured the UCI Women's Road World Cup for a second time after winning three world cup races in the season – La Flèche Wallonne Féminine, the Ladies Golden Hour[32] and the Castilla y Leon World Cup Race.[33] She also won the 2006 Grande Boucle, the women's Tour de France, by over 6 minutes.[34] Other important wins included four stages and the overall title at Thüringen-Rundfahrt stage race[35] and the Magali Pache Time Trial.[36] She came third in the UCI World Road Race Championships.

In 2007, Cooke took the Geelong World Cup and the Ronde van Vlaanderen, the first two races on the 2007 UCI Women's Road World Cup. These early season wins led to her setting a new record in the UCI's women's world road race rankings for the gap between the first and second ranked cyclists.[37] She also won the Trofeo Alfredo Binda for a second time, the Tour of Geelong,[38] stage 2 of the GP Costa Etrusca[39] and defended her Grande Boucle title.

A knee injury sustained prior to the last race of the 2007 World Cup, the Rund um die Nürnberger Altstadt, prevented Cooke from fully defending her title with close challenger Marianne Vos winning the final race and taking the title.[40] Cooke had led the series since the first race. The injury forced her to miss the 2007 World Championships in Stuttgart.[41] Cooke later admitted in an interview in 2008 that she had considered quitting the sport due to the injury.[42]

Cooke joined Team Halfords Bikehut for 2008. Her first victory of 2008 was the Tour de l'Aude, in which she rode with a Great Britain national team, taking the first stage and finishing fourth overall.[43] On 28 June, Cooke won her ninth national road race champion title, and her eighth consecutive win.

She became the first cyclist, male or female, to become the road race World Champion and Olympic gold medalist in the same year.[45] An eventful race in Varese, Italy lasted 3 hours 42 minutes and 11 seconds, culminating in a sprint beating Marianne Vos in to 2nd place and Judith Arndt in 3rd. She credited her team mates for their work, pulling back the 12-rider break with 1 lap to go, putting Cooke back in contention.[46]

Cooke's book, Cycle for life was published in October 2008 by Kyle Cathie (ISBN 9781856267564). The book combines her passion and enthusiasm for cycling, together with her knowledge, proficiency and experience. It is aimed at cyclists at all levels, with expert advice on everything from getting started to turning competitive, covering commuting, racing and riding with friends.[47] 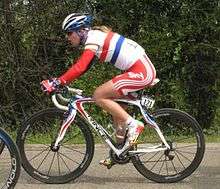 Cooke wearing the British National Road Race Champion's jersey in the 2010 Flèche Wallonne Féminine, in which she finished second to Emma Pooley

Cooke was appointed Member of the Order of the British Empire (MBE) in the 2009 New Year Honours.[48] She was awarded the Transworld Sport "Female Athlete of the Year" title in recognition of her achievements in 2008.[49] She was also awarded the Sunday Times Sportswoman Of The Year award.[50]

In June 2009 Cooke captured the Giro del Trentino title and won her national championship for the tenth time.[51]

After Cooke's Vision1 Cycling Team finished 7th in the 2009 UCI Team Rankings, Cooke closed the Team due to difficulties attracting a major sponsor as the Global Financial Crisis hit. Cooke signed for Equipe Nuernberg Versicherung for 2010. The Team Management had put the team together without signing a main sponsor and in December announced the team had collapsed. Despite a signed contract, the Management did not fulfill their obligations leaving the riders without a team or salary. Cooke raced and trained with the British cycling team in the 2010 season and won a stage at the Iurreta-Emakumeen Bira along with a 5th Place in the Commonwealth Games Women's Road Race and a 4th Place in the World Championships Road Race.

In November 2010 Cooke joined the Italian-based Mcipollini-Giordana team for 2011 and won Stage 5 of the Giro D'Italia and took 4th Place in the World Championships Road Race. In October Cooke won the GP Noosa, Australia.

Joining Faren – Honda for 2012, Cooke scored a win on Stage 6 of the Energiewacht Tour in the Netherlands. At the 2012 Summer Olympics in London, she competed in the road race.

In March 2014, Cooke was reported to be studying for an MBA at Cardiff University.[52] Her autobiography, The Breakaway, was published in the summer of 2014. The Guardian's Richard Williams described it as "a compelling and salutary account of the price she paid for the victories from which many others will benefit".[53]