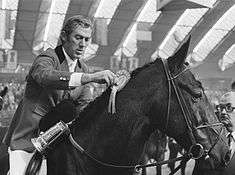 Broome on Sportsman in 1975

Broome was born in Wales, attended Monmouth School, and still maintains his stables at Mount Ballan Manor, Crick, near Chepstow in Monmouthshire. He held the individual European title in 1961, 1967 and 1969. In 1970 he won the world title and became Western Mail Welsh Sports Personality of the year. He turned professional in 1973, and in 1978 helped the British team to win the world championship. Broome has won the King George V Gold Cup a record six times on six different horses between 1960–1991, a record yet to be equalled.[1] He has enjoyed most of his success on Irish Sport Horses and he has said his favourite horse of all was Sportsman.

Broome is still active in the administration of the sport. In 2013, he became president of the British Showjumping Association.[3]