Ivor Armstrong Richards ( 26 February 1893 – 7 September 1979), known as I. A. Richards, was an English educator, literary critic, and rhetorician whose work contributed to the foundations of the New Criticism. Ivor Armstrong Richards was educated at Clifton College and Magdalene College, Cambridge, where his intellectual talents were developed by the scholar Charles Hickson 'Cabby' Spence.[1]

Richard's intellectual contributions to the establishment of the literary methodology of the New Criticism are presented in the books The Meaning of Meaning: A Study of the Influence of Language upon Thought and of the Science of Symbolism (1923), by C. K. Ogden and I. A. Richards, Principles of Literary Criticism (1926), Practical Criticism (1929), and The Philosophy of Rhetoric (1936).

The New Criticism was a formalist movement in literary theory, which emphasized the close reading of a literary text, especially poetry, in an effort to discover how a work of literature functions as a self-contained, self-referential æsthetic object.

Ivor Armstrong Richards began his career without formal training in literature; he studied philosophy (the "moral sciences") at Cambridge University, from which derived his assertions that, in the 20th century, literary study cannot and should not be undertaken as a specialisation, in itself, but studied alongside a cognate field, such as philosophy, psychology, rhetoric, et cetera.

His early teaching appointments were as adjunct faculty; at Cambridge University, Magdalene College would not pay a salary for the instructor I.A. Richards to teach the new and untested academic field of English literature. Instead, like an old-style instructor, I.A. Richards collected weekly tuition directly from the students, as they entered the classroom. In his private life, Ivor Armstrong Richards married Dorothy Pilley Richards in 1926; they had met on a mountain climbing holiday in Wales.

In the 1929–30 biennium, as a visiting professor, Richards taught Basic English and Poetry at Tsinghua University, Beijing.[2][3] In the 1936–38, triennium, Richards was the director of the Orthological Institute of China.[4] 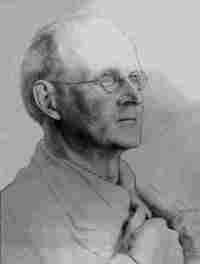 The life and intellectual influence of I.A. Richards approximately corresponds to his intellectual interests; many endeavours were in collaboration with the linguist, philosopher, and writer Charles Kay Ogden (C.K. Ogden), notably in four books:

I. — Foundations of Aesthetics (1922) presents the principles of aesthetic reception, the bases of the literary theory of “harmony”; aesthetic understanding derives from the balance of competing psychological impulses. The structure of the Foundations of Aesthetics — a survey of the competing definitions of the term æsthetic — prefigures the multiple-definitions work in the books Basic Rules of Reason (1933), Mencius on the Mind: Experiments in Multiple Definition (1932), and Coleridge on Imagination (1934)

III. — Basic English: A General Introduction with Rules and Grammar (1930) and IV. — the Times of India Guide to Basic English (1938) developed the Basic English program in effort to develop an international language, an interlanguage based upon a vocabulary of 850 English words.

Richards' travels, especially in China, effectively situated him as the advocate for an international program, such as Basic English. Moreover, at Harvard University, to his international pedagogy, the instructor I.A. Richards began to integrate the available new media for mass communications, especially television. 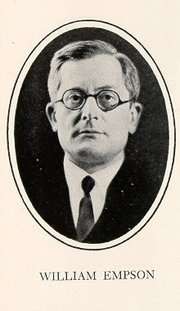 The poet and literary critic William Empson (1906–84), developed the methodology of New Criticism with the practice of closely reading of literary works, prose and poetry; his best-known work is Seven Types of Ambiguity (1930)

I.A. Richards' paternity of the New Criticism is in two books of critical theory, The Principles of Literary Criticism (1924) and Practical Criticism (1929). The first book, The Principles of Literary Criticism, discusses the subjects of form, value, rhythm, coenesthesia (awareness of inhabiting one's body, caused by stimuli from various organs), literary infectiousness, allusiveness, divergent readings, and belief. The second book, Practical Criticism (1929), is an empirical study of inferior response to a literary text.

As an instructor of English literature at Cambridge University, Richards tested the critical-thinking abilities of his pupils; he removed authorial and contextual information from thirteen poems, one by Henry Wadsworth Longfellow (1807– 82), and assigned the literary interpretations to undergraduate students in order to ascertain the likely impediments to an adequate response to a literary text. That experiment in pedagogical approach — critical reading without contexts — demonstrated the variety and the depth of the possible textual misreadings that might be committed, by university student and layman reader alike.

The critical method derived from that pedagogical approach did not propose a new hermeneutics, a new methodology of interpretation, but questioned the purposes and efficacy of the critical process of literary interpretation, by analysing the self-reported critical interpretations of university students. To that end, effective critical work required a closer aesthetic interpretation of the literary text as an object; which methodology produced the empirical-study work about the teaching of composition, e.g. “A Cognitive Process Theory of Writing ” (1981), by Linda Flower and John R. Hayes. (see: Writing process)

To substantiate interpretive criticism, Richards provided theories of metaphor, value, and tone, of stock response, incipient action, and pseudo-statement; and of ambiguity. This last subject, the theory of ambiguity, was developed in Seven Types of Ambiguity (1930), by William Empson, a former student of Richards'; moreover, additional to The Principles of Literary Criticism and Practical Criticism, Empson's book on ambiguity became the third foundational document for the methodology of the New Criticism.

To Richards, literary criticism was impressionistic, too abstract to be readily grasped and understood, by most readers; and he proposed that literary criticism could be precise in communicating meanings, by way of denotation and connotation. To establish critical precision, Richards examined the psychological processes of writing and of the reading of poetry. That in reading poetry and making sense of it “in the degree in which we can order ourselves, we need nothing more”; the reader need not believe the poetry, because the literary importance of poetry is in provoking emotions in the reader.[5]

As a rhetorician, I. A. Richards said that the old form of studying Rhetoric (the art of discourse) was too concerned with the mechanics of formulating arguments and with conflict; instead, he proposed the New Rhetoric to study of the meaning of the parts of discourse, as “a study of misunderstanding and its remedies” to determine how language works. That ambiguity is expected, and that meanings (denotation and connotation) are not inherent to words, but are inherent to the perception of the reader, the listener, and the viewer. By their usages, compiled from experience, people decide and determine meaning by “how words are used in a sentence”, in spoken and written language.[6]

At the age of 75 years, Richards was approached by the Saturday Review to write a piece for their "What I Have Learned" series. Richards surprisingly took this opportunity to expound upon his lesser known concept of "feedforward".[7] According to Richards, feedforward is the concept of anticipating the effect of one's words by acting as our own critic. It is thought to work in the opposite direction of feedback, though it works essentially towards the same goal: to clarify unclear concepts. Existing in all forms of communication,[8] feedforward acts as a pretest that any writer can use to anticipate the impact of their words on their audience. According to Richards, feedforward allows the writer to then engage with their text to make necessary changes to create a better effect. He believes that communicators who do not use feedforward will seem dogmatic. Richards wrote more in depth about the idea and importance of feedforward in communication in his book Speculative Instruments and has claimed that feedforward was his most important learned concept.[9]

Richards served as mentor and teacher to other prominent critics, most notably William Empson and F. R. Leavis though Leavis was contemporary with Richards, Empson much younger. Other critics primarily influenced by his writings also included Cleanth Brooks and Allen Tate. Later critics who refined the formalist approach to New Criticism by actively rejecting his psychological emphasis included, besides Brooks and Tate, John Crowe Ransom, W. K. Wimsatt, R. P. Blackmur, and Murray Krieger. R. S. Crane of the Chicago school was both indebted to Richards's theory and critical of its psychological assumptions. They all admitted the value of his seminal ideas but sought to salvage what they considered his most useful assumptions from the theoretical excesses they felt he brought to bear in his criticism. Like Empson, Richards proved a difficult model for the New Critics, but his model of close reading provided the basis for their interpretive methodology.