For the Hindu god, see Kamadeva. For other uses, see Kama (disambiguation).

Kama (Sanskrit, Pali; Devanagari: काम) means "desire, wish, longing" in Nepali and Indian literature.[3] Kama often connotes sexual desire and longing in contemporary literature, but the concept more broadly refers to any desire, wish, passion, longing, pleasure of the senses, the aesthetic enjoyment of life, affection, or love, with or without sexual connotations.[4][5]

Kama is one of the four goals of human life in Hindu traditions.[2] It is considered an essential and healthy goal of human life when pursued without sacrificing the other three goals: Dharma (virtuous, proper, moral life), Artha (material prosperity, income security, means of life) and Moksha (liberation, release, self-actualization).[6][7] Together, these four aims of life are called Puruṣārtha.[8]

Kama means “desire, wish or longing”.[3] In contemporary literature, kama refers usually to sexual desire.[2] However, the term also refers to any sensory enjoyment, emotional attraction and aesthetic pleasure such as from arts, dance, music, painting, sculpture and nature.[1][9]

The concept kama is found in some of the earliest known verses in Vedas. For example, Book 10 of Rig Veda describes the creation of the universe from nothing by the great heat. There in hymn 129, it states:

Thereafter rose Desire in the beginning, Desire the primal seed and germ of Spirit,
Sages who searched with their heart's thought discovered the existent's kinship in the non-existent.

Brhadaranyaka Upanishad, one of the oldest Upanishads of Hinduism, uses the term kama, also in a broader sense, as any desire:

Ancient Indian literature such as the Epics, that followed the Upanishads, develop and explain the concept of kama together with Artha and Dharma. The Mahabharata, for example, provides one of the expansive definitions of kama. The Epic claims kama to be any agreeable and desirable experience (pleasure) generated by the interaction of one of five senses with anything congenial to that sense and while the mind is concurrently in harmony with the other goals of human life (dharma, artha and moksha).[12]

Kama often implies the short form of the word kamana (desire, appetition). Kama, however, is more than kamana. Kama is an experience that includes the discovery of object, learning about the object, emotional connection, process of enjoyment and the resulting feeling of well being before, during and after the experience.[9]

Vatsyayana, the author of Kamasutra, describes kama as happiness that is a manasa vyapara (phenomenon of the mind). Just like the Mahabharata, Vatsyayana's Kamasutra defines kama as pleasure an individual experiences from the world, with one or more senses - hearing, seeing, tasting, smelling and feeling - in harmony with one’s mind and soul.[6] Experiencing harmonious music is kama, as is being inspired by natural beauty, the aesthetic appreciation of a work of art and admiring with joy something created by another human being. Kama sutra, in its discourse on kama, describes many arts, dance and music forms, along with sex as means to pleasure and enjoyment.[12]

John Lochtefeld explains[2] kama as desires, noting that it often refers to sexual desire in contemporary literature, but in ancient Indian literature kāma includes any kind of attraction and pleasure such as those from the arts.

Karl Potter describes[13] kama as an attitude and capacity. A little girl who hugs her teddy bear with a smile is experiencing kama, as are two lovers in embrace. During these experiences, the person connects and identifies the loved as part of oneself, feels more complete, fulfilled and whole by experiencing that connection and nearness. This, in the Indian perspective, is kāma.[13]

Hindery notes the inconsistent and diverse exposition of kama in various ancient texts of India. Some texts, such as the Epic Ramayana, paint kama through the desire of Rama for Sita, one that transcends the physical and marital into a love that is spiritual, and something that gives Rama his meaning of life, his reason to live.[14] Both Sita and Rama, frequently express their unwillingness and inability to live without the other.[15] This romantic and spiritual view of kama in the Ramayana by Valmiki is quite different, claim Hindery[14] and others,[16] than the normative and dry description of kama in the law codes of smriti by Manu for example. 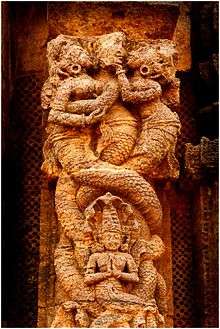 Kama is celebrated in many Hindu temples, such as Khajuraho and the Konark Temple (above).[18]

In Hinduism, kama is regarded as one of the four proper and necessary goals of human life (purusharthas), the others being Dharma (virtuous, proper, moral life), Artha (material prosperity, income security, means of life) and Moksha (liberation, release, self-actualization).[7][19]

Ancient Indian literature emphasizes that dharma precedes and is essential. If dharma is ignored, artha and kama lead to social chaos.[20]

Vatsyayana in Kama Sutra recognizes relative value of three goals as follows: artha precedes kama, while dharma precedes both kama and artha.[6] Vatsyayana, in Chapter 2 of Kama sutra, presents a series of philosophical objections argued against kama and then offers his answers to refute those objections. For example, one objection to kama (pleasure, enjoyment), acknowledges Vatsyayana, is this concern that kāma is an obstacle to moral and ethical life, to religious pursuits, to hard work, and to productive pursuit of prosperity and wealth. The pursuit of pleasure, claim objectors, encourages individuals to commit unrighteous deeds, bring distress, carelessness, levity and suffering later in life.[21] These objections were then answered by Vatsyayana, with the declaration that kama is as necessary to human beings as food, and kama is holistic with dharma and artha.

Kama is necessary for existence

Just like good food is necessary for the well being of the body, good pleasure is necessary for healthy existence of a human being, suggests Vatsyayana.[22] A life without pleasure and enjoyment - sexual, artistic, of nature - is hollow and empty. Just like no one should stop farming crops even though everyone knows herds of deer exist and will try to eat the crop as it grows up, in the same way claims Vatsyayana, one should not stop one's pursuit of kama because dangers exist. Kama should be followed with thought, care, caution and enthusiasm, just like farming or any other life pursuit.[22]

Vatsyayana's book the Kama Sutra, in parts of the world, is presumed or depicted as a synonym for creative sexual positions; in reality, only 20% of Kama Sutra is about sexual positions. The majority of the book, notes Jacob Levy,[23] is about the philosophy and theory of love, what triggers desire, what sustains it, how and when it is good or bad. Kama Sutra presents kama as an essential and joyful aspect of human existence.[24]

Vatsyayana claims kama is never in conflict with dharma or artha, rather all three coexist and kama results from the other two.[6]

A man practicing Dharma, Artha and Kama enjoys happiness now and in future. Any action which conduces to the practice of Dharma, Artha and Kama together, or of any two, or even one of them should be performed. But an action which conduces to the practice of one of them at the expense of the remaining two should not be performed.
— Vatsyayana, The Kama sutra, Chapter 2[25]

Pleasure in general, sexual pleasure in particular, is neither shameful nor dirty, in Hindu philosophy. It is necessary for human life, essential for well being of every individual, and wholesome when pursued with due consideration of dharma and artha. Unlike the precepts of some religions, kama is celebrated in Hinduism, as a value in its own right.[26] Together with artha and dharma, it is an aspect of a holistic life.[9][27] All three purusharthas - Dharma, Artha and Kama - are equally and simultaneously important.[28]

Kama and stage of life

Some[6][29] ancient Indian literature observe that the relative precedence of artha, kama and dharma are naturally different for different people and different age groups. In a baby or child, education and kāma (artistic desires) take precedence; in youth kāma and artha take precedence; while in old age dharma takes precedence.

Kama is personified as deity Kamadeva and his consort Rati. Deity Kama is comparable to the Greek deity Eros - they both trigger human sexual attraction and sensual desire.[2][8] Kama rides a parrot, and the deity is armed with bow and arrows to pierce hearts. The bow is made of sugarcane stalk, the bowstring is a line of bees, and the arrows are tipped with five flowers representing five emotions-driven love states.[30] The five flowers on Kama arrows are lotus flower (infatuation), ashoka flower (intoxication with thoughts about the other person), mango flower (exhaustion and emptiness in absence of the other), jasmine flower (pining for the other) and blue lotus flower (paralysis with confusion and feelings). Kama is also known as Ananga (literally "one without body") because desire strikes formlessly, through feelings in unseen ways.[2] The other names for deity Kama include Madan (he who intoxicates with love), Manmatha (he who agitates the mind), Pradyumna (he who conquers all) and Kushumesu (he whose arrows are flowers).[31]

In Buddhism's Pali Canon, the Gautama Buddha renounced (Pali: nekkhamma) sensuality (kama) in route to his Awakening.[32] Some Buddhist lay practitioners recite daily the Five Precepts, a commitment to abstain from "sexual misconduct" (kamesu micchacara).[33] Typical of Pali Canon discourses, the Dhammika Sutta (Sn 2.14) includes a more explicit correlate to this precept when the Buddha enjoins a follower to "observe celibacy or at least do not have sex with another's wife."[34]

In the Theosophy of Blavatsky, Kama is the fourth principle of the septenary, associated with emotions and desires, attachment to existence, volition, and lust.[35]

Kamaloka is a semi-material plane, subjective and invisible to humans, where disembodied "personalities", the astral forms, called Kama-rupa remain until they fade out from it by the complete exhaustion of the effects of the mental impulses that created these eidolons of human and animal passions and desires. It is associated with Hades of ancient Greeks and the Amenti of the Egyptians, the land of Silent Shadows; a division of the first group of the Trailokya.