Abhinavagupta (c. 950 – 1016 AD[1][2]) was a philosopher, mystic and aesthetician from Kashmir.[3] He was also considered an influential musician, poet, dramatist, exegete, theologian, and logician[4][5] – a polymathic personality who exercised strong influences on Indian culture.[6][7]

He was born in Kashmir[8] in a family of scholars and mystics and studied all the schools of philosophy and art of his time under the guidance of as many as fifteen (or more) teachers and gurus.[9] In his long life he completed over 35 works, the largest and most famous of which is Tantrāloka, an encyclopaedic treatise on all the philosophical and practical aspects of Trika and Kaula (known today as Kashmir Shaivism). Another one of his very important contributions was in the field of philosophy of aesthetics with his famous Abhinavabhāratī commentary of Nāṭyaśāstra of Bharata Muni.[10]

"Abhinavagupta" was not his real name, rather a title he earned from his master, carrying a meaning of "competence and authoritativeness".[12][13] In his analysis, Jayaratha (1150–1200 AD)[14] – who was Abhinavagupta's most important commentator – also reveals three more meanings: "being ever vigilant", "being present everywhere" and "protected by praises".[15] Raniero Gnoli, the only Sanskrit scholar who completed a translation of Tantrāloka in a European language, mentions that "Abhinava" also means "new",[16] as a reference to the ever-new creative force of his mystical experience.

From Jayaratha, we learn that Abhinavagupta was in possession of all the six qualities required for the recipients of the tremendous level of śaktipāta, as described in the sacred texts (Śrīpūrvaśāstra):[17] an unflinching faith in God, realisation of mantras, control over objective principles (referring to the 36 tattvas), successful conclusion of all the activities undertaken, poetic creativity and spontaneous knowledge of all disciplines.[18]

As an author he is considered a systematiser of the philosophical thought. He reconstructed, rationalised and orchestrated the philosophical knowledge into a more coherent form,[20] assessing all the available sources of his time, not unlike a modern scientific researcher of Indology.

Various contemporary scholars have characterised Abhinavagupta as a "brilliant scholar and saint",[21] "the pinnacle of the development of Kasmir Śaivism"[21] and "in possession of yogic realization".[12]

The term by which Abhinavagupta himself defines his origin is "yoginībhū", 'born of a yoginī'.[12][22] In Kashmir Shaivism and especially in Kaula it is considered that a progeny of parents "established in the divine essence of Bhairava",[23] is endowed with exceptional spiritual and intellectual prowess. Such a child is supposed to be "the depository of knowledge", who "even as a child in the womb, has the form of Shiva",[15] to enumerate but a few of the classical attributes of his kind.

His mother, Vimalā (Vimalakalā) died when Abhinavagupta was just two years old;[24][25] as a consequence of losing his mother, of whom he was reportedly very attached,[17] he grew more distant from worldly life and focused all the more on spiritual endeavour.

The father, Narasiṃha Gupta, after his wife's death favoured an ascetic lifestyle, while raising his three children. He had a cultivated mind and a heart "outstandingly adorned with devotion to Mahesvara (Shiva)"[24] (in Abhinavagupta's own words). He was Abhinavagupta's first teacher, instructing him in grammar, logic and literature.[26]

Abhinavagupta had a brother and a sister. The brother, Manoratha, was a well versed devotee of Shiva.[27] His sister, Ambā (probable name, according to Navjivan Rastorgi), devoted herself to worship after the death of her husband in late life.

His cousin Karṇa demonstrated even from his youth that he grasped the essence of Śaivism and was detached of the world. His wife was presumably Abhinavagupta's older sister Ambā,[28] who looked with reverence upon her illustrious brother. Ambā and Karṇa had a son, Yogeśvaridatta, who was precociously talented in yoga[29] (yogeśvar implies "lord of yoga").

Abhinavagupta also mentions his disciple Rāmadeva as faithfully devoted to scriptural study and serving his master.[28] Another cousin was Kṣema, possibly the same as Abhinavagupta's illustrious disciple Kṣemarāja. Mandra, a childhood friend of Karṇa, was their host in a suburban residence; he was not only rich and in possession of a pleasing personality, but also equally learned.[30] And last but not least, Vatasikā, Mandra's aunt, who got a special mention from Abhinavagupta for caring for him with exceptional dedication and concern; to express his gratitude, Abhinavagupta declared that Vatasikā deserved the credit for the successful completion of his work.[31]

The emerging picture here is that Abhinavagupta lived in a nurturing and protected environment, where his creative energies got all the support they required. Everyone around him was filled with spiritual fervor and had taken Abhinavagupta as their spiritual master. Such a supporting group of family and friends was equally necessary as his personal qualities of genius, to complete a work of the magnitude of Tantrāloka.

By Abhinavagupta's own account, his most remote known ancestor was called Atrigupta, born in Madhyadeśa: [Manusmirti (circa 1500 BC, 2/21) defines the Madhyadesh region as vast plains between Himalaya and Vindhya mountains and to the east of the river Vinasana (invisible Saraswati) and to the west of Praya]. Born in Madhyadeśa he travelled to Kashmir at the request of the king Lalitāditya,[32][33] around year 740 CE .[34]

Abhinavagupta is famous for his voracious thirst of knowledge. To study he took many teachers (as many as 15, or even more!),[35] both mystical philosophers and scholars. He approached Vaiṣṇavas, Buddhists, Śiddhānta Śaivists and the Trika scholars.

Among the most prominent of his teachers he enumerates four. Vāmanātha who instructed him in dualistic Śaivism[36] and Bhūtirāja in the dualist/nondualist school. Besides being the teacher of the famous Abhinavagupta, Bhūtirāja was also the father of two eminent scholars.[37]

Lakṣmasṇagupta, a direct disciple of Somānanda, in the lineage of Trayambaka, was highly respected by Abhinavagupta and taught him all the schools of monistic thought : Krama, Trika and Pratyabhijña (except Kula).[36]

Śambhunātha taught him the fourth school (Ardha-trayambaka). This school is in fact Kaula, and it was emanated from Trayambaka's daughter.

For Abhinavagupta, Śambhunātha was the most admired guru. Describing the greatness of his master, he compared Śambhunātha with the Sun, in his power to dispel ignorance from the heart, and, in another place, with "the Moon shining over the ocean of Trika knowledge".[38]

Abhinavagupta received Kaula initiation through Śambhunātha's wife (acting as a dūtī or conduit). The energy of this initiation is transmitted and sublimated into the heart and finally into consciousness. Such a method is difficult but very rapid and is reserved for those who shed their mental limitations and are pure.

It was Śambhunātha who requested of him to write Tantrāloka. As guru, he had a profound influence in the structure of Tantrāloka[39] and in the life of its creator, Abhinavagupta.[40]

As many as twelve more of his principal teachers are enumerated by name but without details.[41] It is believed that Abhinavagupta had more secondary teachers. Moreover, during his life he had accumulated a large number of texts from which he quoted in his magnum opus, in his desire to create a synthetic, all inclusive system, where the contrasts of different scriptures could be resolved by integration into a superior perspective.

Abhinavagupta remained unmarried all his life,[42] we do however know him to be an adept of Kaula and as such, used his energy (ojas) as a vital force, a constant source of shakti to power the spiritual nervous system he outlined in his works. This system involves ritual union between Purusha as (Shiva) and shakti, yet this union is essentially non-physical and universal, and thus for a master such as Abhinavagupta, he was always in communion with Shiva-Shakti. We can only speculate about whether he was physically chaste, and either answer to this question is not very meaningful in the context of his life and teachings. Abhinavagupta parallels Shiva as both ascetic and enjoyer.

He studied assiduously at least until the age of 30 or 35,[34] and to do that he travelled, but mostly inside Kashmir.[43]

By his own testimony, he had attained spiritual liberation through his Kaula practice, under the guidance of his most admired master, Śambhunātha.[40]

He lived in his home (functioning as an ashram) with his family members and disciples[44] and he did not become a wandering monk, nor did he take on the regular duties of his family.

Thus, Abhinavagupta lived out his life as a writer and a teacher.[38] His personality was a living realisation of his vision.[4]

In an epoch pen-painting he is depicted seated in Virasana, surrounded by devoted disciples and family, performing a kind of trance inducing music at veena while dictating verses of Tantrāloka to one of his attendees – behind him two dūtī (women yogi) waiting on him.

A legend about the moment of his death (placed somewhere between 1015 and 1025 depending on the source), says that he took with him 1200 disciples and marched off to a cave (the Bhairava Cave, an actual place known to this day), reciting his poem Bhairava-stava, a devotional work. They were never to be seen again, supposedly translating together in the spiritual world.[45] 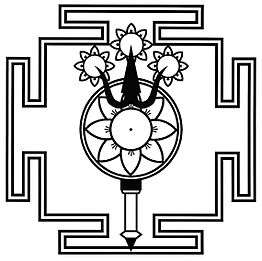 Abhinavagupta's works fall into multiple sections: manuals of religious ritual, devotional songs, philosophical works and philosophy of aesthetics. Here are enumerated most of his works.[10] Bold type faced titles represent the most important ones.

His most important work was Tantrāloka,(translates into "To Throw Light on Tantra"), a synthesis of all the Trika system.[12] Its only complete translation in a European language – Italian – is credited to Raniero Gnoli, now at its second edition.[46] The esoteric chapter 29 on the Kaula ritual was translated in English together with Jayaratha's commentary by John R. Dupuche, Rev. Dr.[15] A complex study on the context, authors, contents and references of Tantrāloka was published by Navjivan Rastogi, Prof. of the Lucknow University.[47] Though there are no English translations of Tantrāloka to date, the last recognized master of the oral tradition of Kashmir Shaivism, Swami Lakshman Joo, gave a condensed version of the important philosophical chapters of ‘‘Tantrāloka’‘ in his book, Kashmir Shaivism – The Secret Supreme.[48]

Another important text was the commentary on Parātrīśikā, Parātrīśikāvivaraṇa, detailing the signification of the phonematic energies and their two sequential ordering systems, Mātṛkā and Mālinī. This was the last great translation project of Jaideva Singh.[49]

Tantrasāra ("Essence of Tantra") is a summarised version, in prose, of Tantrāloka, which was once more summarised in Tantroccaya, and finally presented in a very short summary form under the name of Tantravaṭadhānikā – the "Seed of Tantra".

Other religious works are: Parātrīśikā-laghuvṛtti, "A Short Commentary on Parātrīśikā", Paryantapañcāśīkā ("Fifty Verses on the Ultimate Reality"), Rahasyapañcadaśikā ("Fifteen Verses on the Mystical Doctrine"), Laghvī prakriyā ("Short Ceremony"), Devīstotravivaraṇa ("Commentary on the Hymn to Devi") and Paramārthasāra ("Essence of the Supreme Reality").

Abhinavagupta has composed a number of devotional poems, most of which have been translated into French by Lilian Silburn:[51]

One of the most important works of Abhinavagupta is Īśvarapratyabhijñā-vimarśini ("Commentary to the Verses on the Recognition of the Lord") and Īśvarapratyabhijñā-vivṛti-vimarśini ("Commentary on the explanation of Īśvarapratyabhijñā"). This treatise is fundamental in the transmission of the Pratyabhijña school (the branch of Kashmir Shaivism based on direct recognition of the Lord) to our days. Another commentary on a Pratyabhijña work – Śivadṛṣtyā-locana ("Light on Śivadṛṣṭi") – is now lost. Another lost commentary is Padārthapraveśa-nirṇaya-ṭīkā and Prakīrṇkavivaraṇa ("Comment on the Notebook") referring to the third chapter of Vākyapadīya of Bhartrihari. Two more philosophical texts of Abhinavagupta are Kathāmukha-tilaka("Ornament of the Face of Discourses") and Bhedavāda-vidāraṇa ("Confrontation of the Dualist Thesis").

Other poetical works include: Ghaṭa-karpara-kulaka-vivṛti, a commentary on "Ghaṭakarpara" of Kalidasa; Kāvyakauṭukavivaraṇa, a "Commentary to the Wonder of Poetry" (a work of Bhaṭṭa Tauta), now lost; and Dhvanyālokalocana, "Illustration of Dhvanyāloka", which is a famous work of Anandavardhana.