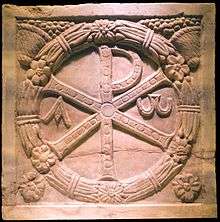 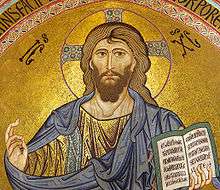 Mosaic of Christ Pantokrator with the Christogram ΙϹ ΧϹ on either side of Christ's head. 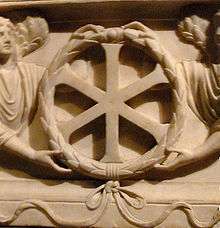 A Christogram (Latin Monogramma Christi[1] ) is a monogram or combination of letters that forms an abbreviation for the name of Jesus Christ, traditionally used as a religious symbol within the Christian Church.

One of the oldest Christograms is the Chi-Rho. It consists of the superimposed Greek letters chi (Χ) and rho (Ρ), which are the first two letters of Greek χριστός "Christ". It was displayed on the labarum military standard used by Constantine I in AD 312. The IX monogram (

) is a similar form, using the initials of the name Ἰησοῦς (ὁ) Χριστός "Jesus (the) Christ", as is the ΙΗ monogram (

), using the first two letters of the name Ἰησοῦς "Jesus".

There were a considerable number of variants of "Christograms" or monograms of Christ in use during the medieval period, with the boundary between specific monograms and mere scribal abbreviations somewhat fluid.

The name Jesus, spelt "ΙΗΣΥΣ" in Greek capitals, has the abbreviations IHS (also written JHS, IHC, or ΙΗΣ), the name Christus , spelt "ΧΡΙΣΤΟΣ", has XP (and inflectional variants such as XPO, XPS, XPI, XPO, XPM). In Eastern Christian tradition, the monogram ΙϹΧϹ (with titlo indicating scribal abbreviation) is used for in both Greek and Cyrillic tradition.

A Middle Latin term for abbreviations of the name of Christ is chrisimus.[2] Similarly, Middle Latin crismon, chrismon refers to the Chi Rho monogram specifically.[3]

In antiquity, the cross, i.e. the instrument of Christ's crucifixion (crux, stauros) was taken to be T-shaped, while the X-shape ("chiasmus") had different connotations. There has been a lot of scholarly speculation on the development of the Christian cross, the letter Chi used to abbreviate the name of Christ, and the various pre-Christian symbolism associated with the chiasmus interpreted in terms of "the mystery of the pre-existent Christ".[4]

In Plato's Timaeus, it is explained that the two bands which form the "world soul" (anima mundi) cross each other like the letter chi, possibly referring to the ecliptic crossing the celestial equator.[5] Justin Martyr in the 2nd century makes explicit reference to Plato's image in Timaeus in terms of a prefiguration of the Holy Cross.[6] and an early testimony may be the phrase in Didache, "sign of extension in heaven" (sēmeion epektaseōs en ouranōi).[4]

An alternate explanation of the intersecting celestial symbol has been advanced by George Latura, claiming that Plato's visible god in Timaeus is in fact the intersection of the Milky Way and the Zodiacal Light, a rare apparition important to pagan beliefs that Christian bishops reinvented as a Christian symbol.[7]

The most commonly encountered Christogram in English-speaking countries in modern times is the X (or more accurately, the Greek letter chi), representing the first letter of the word Christ, in such abbreviations as Xmas (for "Christmas") and Xian or Xtian (for "Christian"). 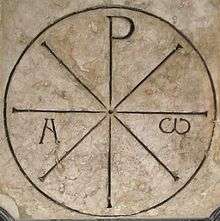 The Alpha and Omega symbols may at times accompany the Chi-Rho monogram.[9] Chrismon (chrismum; also chrismos, chrismus) since the 17th century has been used as a New Latin term for the Chi Rho monogram.

Because the chrismon was used as a kind of "invocation" at the beginning of documents of the Merovingian period, the term also came to be used of the "cross-signatures" in early medieval charters.[10] Chrismon in this context may refer to the Merovingian period abbreviation I. C. N. for in Christi nomine, later (in the Carolingian period) also I. C. for in Christo, and still later (in the high medieval period) just C. for Christus.[11]

St Cuthbert's coffin (late 7th century) has an exceptional realisation of the Christogram written in Anglo-Saxon runes, as ᛁᚻᛋ ᛉᛈᛋ, as it were "IHS XPS", with the chi rendered as the eolh rune (the old z or algiz rune) and the rho rendered as the p-rune.

In the Latin-speaking Christianity of medieval Western Europe (and so among Catholics and many Protestants today), the most common Christogram became "IHS" or "IHC", denoting the first three letters of the Greek name of Jesus, IHΣΟΥΣ, iota-eta-sigma, or ΙΗΣ.[12][13][14]

"IHS" is sometimes interpreted as meaning "Jesus Hominum (or Hierosolymae) Salvator", ("Jesus, Saviour of men [or: of Jerusalem]" in Latin)[15] or connected with In Hoc Signo. Such interpretations are known as backronyms. Used in Latin since the seventh century, the first use of IHS in an English document dates from the fourteenth century, in The vision of William concerning Piers Plowman.[16] In the 15th century, Saint Bernardino of Siena popularized the use of the three letters on the background of a blazing sun to displace both popular pagan symbols and seals of political factions like the Guelphs and Ghibellines in public spaces (see Feast of the Holy Name of Jesus). The IHS monogram with the H surmounted by a cross above three nails and surrounded by a Sun is the emblem of the Jesuits, according to tradition introduced by Ignatius of Loyola in 1541.[15] English-language interpretations of "IHS" have included "I Have Suffered" or "In His Service", or jocularly and facetiously "Jesus H. Christ" (19th century).

In Eastern Christianity, the most widely used Christogram is a four-letter abbreviation, ΙϹ ΧϹ — a traditional abbreviation of the Greek words for "Jesus Christ" (i.e., the first and last letters of each of the words "ΙΗϹΟΥϹ ΧΡΙϹΤΟϹ, with the lunate sigma "Ϲ" common in medieval Greek),[17] and written with titlo (diacritic) denoting scribal abbreviation (І҃С Х҃С).

On icons, this Christogram may be split: "ΙϹ" on the left of the image and "ΧϹ" on the right. It is sometimes rendered as "ΙϹ ΧϹ ΝΙΚΑ", meaning "Jesus Christ Conquers." "ΙϹΧϹ" may also be seen inscribed on the Ichthys. In the traditional icon of Christ Pantokrator, Christ's right hand is shown in a pose where his fingers bend and cross to form the letters ΙϹ, Χ, and Ϲ.