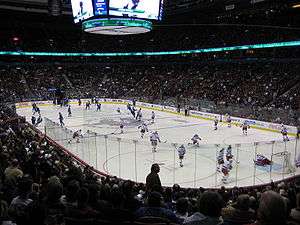 Canada Hockey Place was the main venue at the 2010 Winter Olympics in Vancouver. Here, we see the Vancouver Canucks (blue) and the New York Rangers (white) warming up before a game.

An ice hockey arena (or ice hockey venue) is a sport venue in which an ice hockey competition is held. Alternatively it is used for other sorts such us broomball, ringette and rink bandy. A lot of hockey arenas were designed for use by multiple types of sport.

Notable hockey arenas in the world

Arena names with an asterisk (*) after their city name means that it has either been demolished or is no longer used by any ice hockey teams.