This article is about the indoor sporting arena in Toronto. For the headquarters of Air Canada in Montreal, see Air Canada § Headquarters.

The Air Canada Centre (ACC) is a multi-purpose indoor sporting arena located on Bay Street in the South Core district of Downtown Toronto, Ontario, Canada. It is the home of the Toronto Maple Leafs of the National Hockey League (NHL), the Toronto Raptors of the National Basketball Association (NBA) and the Toronto Rock of the National Lacrosse League (NLL). In addition, the Toronto Marlies of the American Hockey League play occasional games at the arena,[8] and the Raptors 905 of the NBA Development League plan to play occasional games at the venue as well. The area was previously home to the Toronto Phantoms of the Arena Football League (AFL) during their brief existence. The arena is popularly known as the ACC or the Hangar (the latter nickname came from its sponsorship by Air Canada).

The arena is owned and operated by Maple Leaf Sports & Entertainment Ltd. (MLSE), the same group that owns both the Leafs and Raptors, as well as their respective development teams, and is 665,000 square feet (61,800 square metres) in size. In 2008, the ACC was the fifth busiest arena in the world and the busiest in Canada.[9] The Air Canada Centre is connected to Union Station and the underground pedestrian PATH system, providing access to public transportation (TTC's Union subway station and GO Transit). There are also 13,000 parking spaces.

The Air Canada Centre has, from its initial design to completion, revolutionized many concepts included in new arenas and stadiums built since then. These features include luxury suites accessible on the ground floor, splitting the main scoreboard into several sections, rotating all sponsor signage in the bowl at once (to allow dominant messaging), and multiple restaurants in and out of the main arena bowl view. 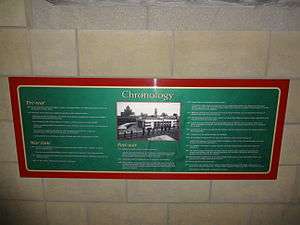 A Raptors game vs the Sacramento Kings with the previous logo and colours, as well as the old scoreboard, later relocated to Ricoh Coliseum

Construction of the Air Canada Centre was started by the Toronto Raptors, under its initial ownership group headed by Canadian businessman John Bitove, who played in the SkyDome. Groundbreaking took place in March 1997. While construction was in progress, the Raptors and their partially completed arena were purchased by MLSE, which was contemplating building their own arena for the Maple Leafs to replace the aging Maple Leaf Gardens. MLSE subsequently ordered major modifications to the original design, which was basketball-specific, to make the arena become more suitable for hockey. Originally planned to cost $217 million, MLSE increased the budget to $265 million after taking control.[2] The Raptors were twice fined a million dollars (which were donated to their charitable foundation) by the NBA for missing deadlines to begin construction of their new arena.[10]

The arena site was once occupied by Canada Post's Toronto Postal Delivery Building (designed by Charles B. Dolphin), which was briefly handed over to Department of National Defence for war storage purposes upon completion in 1941, but returned to Canada Post in 1946. In the early 1990s, real estate developers Bramalea Ltd and Trizec arranged to purchase the building from Canada Post with equal ownership, and redevelop the site into a 2,500,000-square-foot (230,000 m2) office, retail and residential space. The financial and development details of the purchase had various conditions around the property being rezoned by the city, and remediation of soil contamination by Canada Post before any development.[11] Due to financial difficulties, the building ownership was returned to Canada Post in 1993. The Toronto Raptors purchased the building from Canada Post the next year.

The current building retains the striking Art Deco façades of the east (along Bay Street) and south (Lake Shore Boulevard) walls of that structure, but the rest of the building (facing Union Station) was removed to make room for the arena, through the process of facadism. The original building is protected under the Ontario Heritage Act.

A 15-storey tower on Bay Street stands at 55 metres (180 ft) and provides connections in the atrium to Union Station, Bay Street, and York Street (via Bremner Boulevard). The Air Canada Centre is connected to the underground PATH network.

Air Canada purchased naming rights to the arena for $30 million over 20 years since opening.[12]

In late 2005, Maple Leaf Sports and Entertainment announced that they would be renovating the western side of the Air Canada Centre during the 2008 off-season to connect it with the Maple Leaf Square development. Maple Leaf Square is jointly owned by MLSE, Cadillac Fairview and Lantera Developments. The $500 million development includes two restaurants, Hotel Le Germain at Maple Leaf Square boutique hotel, extensive retail shopping, including a 9,000-square-foot (840 m2) Leafs, Marlies, Raptors, and Toronto FC store, two 54-storey condominiums, a Longo's supermarket, and a public square. It opened in 2010. The two-year, $48 million renovation of the ACC added a new atrium that includes a High-Definition broadcast studio for Leafs TV, NBA TV Canada and GolTV Canada. The outside wall of the atrium features a 30-by-50-foot (9.1 by 15.2 m) video screen overlooking the plaza, which often broadcasts games taking place inside the arena. During NHL and NBA playoff runs, the square attracts thousands of Leafs and Raptors fans, respectively, sometimes broadcasting away playoff matches featuring the Leafs and/or the Raptors as well.[15] A section of the square is designated Ford Fan Zone at Maple Leaf Square, with naming rights given to the Ford Motor Company of Canada. During Raptors playoff runs, the square has acquired the nickname "Jurassic Park". 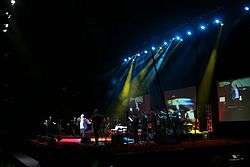 The Air Canada Centre has played host to a large number of internationally renowned musicians. The venue sold 643,845 concert tickets in 2015, making it the 9th largest for an arena in the world and largest in Canada.[16]

The Tragically Hip played the first ever concert at the arena on February 22, 1999 to a sold out crowd.[17] Bon Jovi has played 17 dates at the arena, more than any other artist, and was the first musical act inducted into the ACC Hall of Fame in 2013.[18] 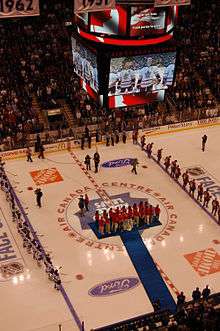 Preparing for the National Anthem at the Toronto Maple Leafs home opener against the Montreal Canadiens during the 2008–2009 season.

The first Maple Leafs home game took place on February 20, 1999, versus the Montreal Canadiens, won by the Leafs 3–2 on an overtime goal by Steve Thomas. Maple Leaf home games are generally sold out,[19] and despite their lack of appearances in NHL playoffs and the Stanley Cup, there is a waitlist since the start of 2015 for Season Ticket Holders for upcoming seasons.[20] The first Raptors game took place the following night versus the Vancouver Grizzlies (later moved to Memphis). The Raptors won 102–87 in front of a sell-out crowd. The facility hosted the 2000 NHL All-Star Game, the championship game of the 2004 World Cup of Hockey and hosted the 2016 NBA All-Star Game.

The Toronto Rock also moved to the ACC from Maple Leaf Gardens for the 2001 NLL season. The Rock's first game was a 17–7 win over the Ottawa Rebel on December 21, 2000.

On October 3, 2003, the ACC had a power outage during the third quarter of a Raptors pre-season game against the Athens-based club Panathinaikos. The game was called final, because the power was not restored in time and Toronto already had a 30-point lead.

Between 2011 and 2013, it has played host to three Ultimate Fighting Championship (UFC) events.

The Air Canada Centre hosted the 2016 World Cup of Hockey.

In 2003, the Liberal Party of Canada held their leadership convention at the Air Canada Centre.