Ignatius Loyola Donnelly (November 3, 1831 – January 1, 1901) was a U.S. Congressman, populist writer, and amateur scientist. He is known primarily now for his theories concerning Atlantis, Catastrophism (especially the idea of an ancient impact event affecting ancient civilizations), and Shakespearean authorship, which many modern historians consider to be pseudoscience and pseudohistory. Donnelly's work corresponds to the writings of late 19th and early 20th century figures such as Helena Blavatsky, Rudolf Steiner, and James Churchward.

Donnelly was the son of Philip Carrol Donnelly, an Irish Catholic immigrant who had settled in Philadelphia, Pennsylvania. His sister was the writer Eleanor C. Donnelly. On June 29, 1826, Philip had married Catherine Gavin, a second generation American of Irish ancestry.

After starting as a peddler, Philip studied medicine at the Philadelphia College of Medicine. He later contracted typhus from a patient and died at age 31, leaving his wife with five children.

Catherine provided for her children by operating a pawn shop. Ignatius, her youngest son, was admitted to the prestigious Central High School, the second oldest public high school in the United States. There he studied under the presidency of John S. Hart, excelling primarily in literature.

Donnelly decided to become a lawyer, and became a clerk for Benjamin Brewster, who later became Attorney-General of the United States. Donnelly was admitted to the bar in 1852. In 1855, he married Katherine McCaffrey, with whom he had three children. In 1855, he resigned his clerkship, entered politics, and participated in communal home building schemes. He quit the Catholic Church some time in the 1850s, and thereafter was never active in any religious group.[1]

Donnelly moved to the Minnesota Territory in 1857 amidst rumors of financial scandal, and there he settled in Dakota County. He initiated a utopian community called Nininger City, together with several partners. However, the Panic of 1857 doomed the attempt at a cooperative farm and community, and left Donnelly deeply in debt.

Donnelly died on January 1, 1901, in Minneapolis, Minnesota, age 69 years. He is buried at Calvary Cemetery in St. Paul, Minnesota. His personal papers are archived at the Minnesota Historical Society.[2]

Donnelly entered politics and was lieutenant governor of Minnesota from 1860–1863. He was a Radical Republican Congressman from Minnesota in the 38th, 39th, and 40th congresses, (1863–1869), a state senator from 1874–1878 and 1891-1894 and a state representative from 1887-1888 and 1897-1898.[3] As a legislator, he advocated extending the powers of the Freedmen's Bureau to provide education for freedmen so that they could protect themselves once the bureau was withdrawn. Donnelly was also an early supporter of women's suffrage. After leaving the Minnesota State Senate in 1878, he returned to his law practice and writing.

In 1882, Donnelly published Atlantis: The Antediluvian World, his best known work. It details theories concerning the mythical lost continent of Atlantis. The book sold well, and is widely credited with initiating the theme of Atlantis as an antediluvian civilization that became such a feature of popular literature during the 20th century, and contributed to the emergence of Mayanism. Donnelly suggested that Atlantis, whose story was told by Plato in the dialogues of Timaeus and Critias, had been destroyed during the same event remembered in the Bible as the Great Flood. He cited research on the ancient Maya civilization by Charles Étienne Brasseur de Bourbourg and Augustus Le Plongeon, claiming that it had been the place of a common origin of ancient civilizations in Africa (especially ancient Egypt), Europe, and the Americas). He also thought that it had been the original home of an Aryan race whose red-haired, blue-eyed descendants could be found in Ireland.

A year after Atlantis, he published Ragnarok: The Age of Fire and Gravel, in which he expounded his belief that the Flood (as well as the destruction of Atlantis and the extinction of the mammoth) had been brought about by the near-collision of the earth with a massive comet. This book also sold well, and both books seem to have had an important influence on the development of Immanuel Velikovsky's controversial ideas half a century later. 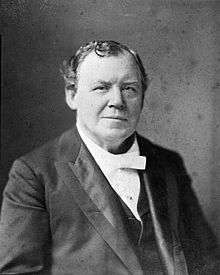 Donnelly circa 1898 by Frederick Gutekunst

In 1888, he published The Great Cryptogram in which he proposed that Shakespeare's plays had been written by Francis Bacon, an idea that was popular during the late 19th and early 20th century. He then travelled to England to arrange the English publication of his book by Sampson Low, speaking at the Oxford (and Cambridge) Union, where his thesis "Resolved, that the works of William Shakespeare were composed by Francis Bacon" was put to an unsuccessful vote. The book was a complete failure and Donnelly was discredited.

Donnelly also made several other campaigns for public office during the 1880s. He made a losing campaign for Congress (this time as a Democrat) in 1884. In 1887, he successfully campaigned for a seat in the Minnesota State Legislature as an Independent. During this period, he was also an organizer of the Minnesota Farmers' Alliance.

In 1892, Donnelly wrote the preamble of the People's Party's Omaha Platform for the presidential campaign of that year. He was nominated for Vice President of the United States in 1900 by the People's Party, also known as the Populist Party. The People's Party was a development of the national Farmers' Alliance, and had a platform that demanded abandonment of the gold standard (and later for free silver), abolition of national banks, a graduated income tax, direct election of senators, civil service reform, and an eight-hour day. That year, Donnelly also campaigned for governor of Minnesota, but was defeated.

The People's Party protested the railroad companies corrupting government, and advocated government regulation of the railroads. Donnelly had a key leadership role in this party, yet he received $10,000 from the Lake Superior and Mississippi Railroad Company.[4]

During the 1930s, an organization was formed to lobby for the creation of a state park at Donnelly's home at Nininger near Hastings, Minnesota. The house was still standing in 1939, but the effort failed and the house has since been demolished.[5]

Donnelly's writings on Atlantis have been rejected by scholars and scientists.[6] He has been described as a crank and pseudoscience promoter.[7][8]

Gordon Stein has noted that "most of what Donnelly said was highly questionable or downright wrong."[9]