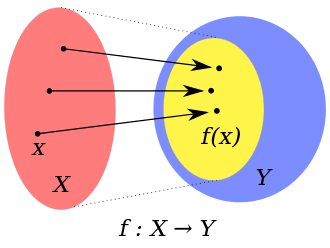 f is a function from domain X to codomain Y. The yellow oval inside Y is the image of f.

In mathematics, an image is the subset of a function's codomain which is the output of the function from a subset of its domain.

Evaluating a function at each element of a subset X of the domain, produces a set called the image of X under or through the function. The inverse image or preimage of a particular subset S of the codomain of a function is the set of all elements of the domain that map to the members of S.

Image and inverse image may also be defined for general binary relations, not just functions.

The word "image" is used in three related ways. In these definitions, f : X → Y is a function from the set X to the set Y.

Image of an element

If x is a member of X, then f(x) = y (the value of f when applied to x) is the image of x under f. y is alternatively known as the output of f for argument x.

Image of a subset

The image of a subset A ⊆ X under f is the subset f[A] ⊆ Y defined by (in set-builder notation):

Image of a function

The image f[X] of the entire domain X of f is called simply the image of f.

Let f be a function from X to Y. The preimage or inverse image of a set B ⊆ Y under f is the subset of X defined by

The inverse image of a singleton, denoted by f −1[{y}] or by f −1[y], is also called the fiber over y or the level set of y. The set of all the fibers over the elements of Y is a family of sets indexed by Y.

For example, for the function f(x) = x2, the inverse image of {4} would be {−2, 2}. Again, if there is no risk of confusion, we may denote f −1[B] by f −1(B), and think of f −1 as a function from the power set of Y to the power set of X. The notation f −1 should not be confused with that for inverse function. The notation coincides with the usual one, though, for bijections, in the sense that the inverse image of B under f is the image of B under f −1.

Notation for image and inverse image

The traditional notations used in the previous section can be confusing. An alternative[1] is to give explicit names for the image and preimage as functions between powersets:

The results relating images and preimages to the (Boolean) algebra of intersection and union work for any collection of subsets, not just for pairs of subsets:

(Here, S can be infinite, even uncountably infinite.)

This article incorporates material from Fibre on PlanetMath, which is licensed under the Creative Commons Attribution/Share-Alike License.