In mathematics, E6 is the name of some closely related Lie groups, linear algebraic groups or their Lie algebras

, all of which have dimension 78; the same notation E6 is used for the corresponding root lattice, which has rank 6. The designation E6 comes from the Cartan–Killing classification of the complex simple Lie algebras (see Élie_Cartan § Work). This classifies Lie algebras into four infinite series labeled An, Bn, Cn, Dn, and five exceptional cases labeled E6, E7, E8, F4, and G2. The E6 algebra is thus one of the five exceptional cases.

In particle physics, E6 plays a role in some grand unified theories.

There is a unique complex Lie algebra of type E6, corresponding to a complex group of complex dimension 78. The complex adjoint Lie group E6 of complex dimension 78 can be considered as a simple real Lie group of real dimension 156. This has fundamental group Z/3Z, has maximal compact subgroup the compact form (see below) of E6, and has an outer automorphism group non-cyclic of order 4 generated by complex conjugation and by the outer automorphism which already exists as a complex automorphism.

The EIV form of E6 is the group of collineations (line-preserving transformations) of the octonionic projective plane OP2.[1] It is also the group of determinant-preserving linear transformations of the exceptional Jordan algebra. The exceptional Jordan algebra is 27-dimensional, which explains why the compact real form of E6 has a 27-dimensional complex representation. The compact real form of E6 is the isometry group of a 32-dimensional Riemannian manifold known as the 'bioctonionic projective plane'; similar constructions for E7 and E8 are known as the Rosenfeld projective planes, and are part of the Freudenthal magic square.

E6 as an algebraic group

By means of a Chevalley basis for the Lie algebra, one can define E6 as a linear algebraic group over the integers and, consequently, over any commutative ring and in particular over any field: this defines the so-called split (sometimes also known as “untwisted”) adjoint form of E6. Over an algebraically closed field, this and its triple cover are the only forms; however, over other fields, there are often many other forms, or “twists” of E6, which are classified in the general framework of Galois cohomology (over a perfect field k) by the set H1(k, Aut(E6)) which, because the Dynkin diagram of E6 (see below) has automorphism group Z/2Z, maps to H1(k, Z/2Z) = Hom (Gal(k), Z/2Z) with kernel H1(k, E6,ad).[2]

Over the field of real numbers, the real component of the identity of these algebraically twisted forms of E6 coincide with the three real Lie groups mentioned above, but with a subtlety concerning the fundamental group: all adjoint forms of E6 have fundamental group Z/3Z in the sense of algebraic geometry, with Galois action as on the third roots of unity; this means that they admit exactly one triple cover (which may be trivial on the real points); the further non-compact real Lie group forms of E6 are therefore not algebraic and admit no faithful finite-dimensional representations. The compact real form of E6 as well as the noncompact forms EI=E6(6) and EIV=E6(-26) are said to be inner or of type 1E6 meaning that their class lies in H1(k, E6,ad) or that complex conjugation induces the trivial automorphism on the Dynkin diagram, whereas the other two real forms are said to be outer or of type 2E6.

Over finite fields, the Lang–Steinberg theorem implies that H1(k, E6) = 0, meaning that E6 has exactly one twisted form, known as 2E6: see below.

The Dynkin diagram for E6 is given by

, which may also be drawn as 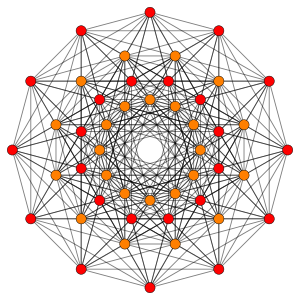 The 72 vertices of the 122 polytope represent the root vectors of the E6, as shown in this Coxeter plane projection. Orange vertices are doubled in this projection.Coxeter-Dynkin diagram: 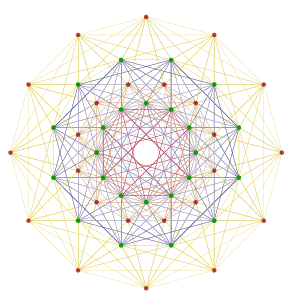 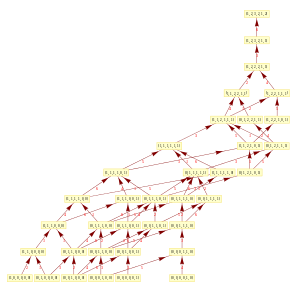 An alternative (6-dimensional) description of the root system, which is useful in considering E6 × SU(3) as a subgroup of E8, is the following:

preserving the zero at the last entry,

Thus the 78 generators consist of the following subalgebras:

A 45-dimensional SO(10) subalgebra, including the above

generators plus the five Cartan generators corresponding to the first five entries.
Two 16-dimensional subalgebras that transform as a Weyl spinor of

and its complex conjugate. These have a non-zero last entry.
1 generator which is their chirality generator, and is the sixth Cartan generator.

One choice of simple roots for E6 is given by the rows of the following matrix, indexed in the order

The Lie algebra E6 has an F4 subalgebra, which is the fixed subalgebra of an outer automorphism, and an SU(3) × SU(3) × SU(3) subalgebra. Other maximal subalgebras which have an importance in physics (see below) and can be read off the Dynkin diagram, are the algebras of SO(10) × U(1) and SU(6) × SU(2).

The fundamental representations have dimensions 27, 351, 2925, 351, 27 and 78 (corresponding to the six nodes in the Dynkin diagram in the order chosen for the Cartan matrix above, i.e., the nodes are read in the five-node chain first, with the last node being connected to the middle one).

The E6 polytope is the convex hull of the roots of E6. It therefore exists in 6 dimensions; its symmetry group contains the Coxeter group for E6 as an index 2 subgroup.

Chevalley and Steinberg groups of type E6 and 2E6

The groups of type E6 over arbitrary fields (in particular finite fields) were introduced by Dickson (1901, 1908).

The points over a finite field with q elements of the (split) algebraic group E6 (see above), whether of the adjoint (centerless) or simply connected form (its algebraic universal cover), give a finite Chevalley group. This is closely connected to the group written E6(q), however there is ambiguity in this notation, which can stand for several things:

From the finite group perspective, the relation between these three groups, which is quite analogous to that between SL(n,q), PGL(n,q) and PSL(n,q), can be summarized as follows: E6(q) is simple for any q, E6,sc(q) is its Schur cover, and E6,ad(q) lies in its automorphism group; furthermore, when q−1 is not divisible by 3, all three coincide, and otherwise (when q is congruent to 1 mod 3), the Schur multiplier of E6(q) is 3 and E6(q) is of index 3 in E6,ad(q), which explains why E6,sc(q) and E6,ad(q) are often written as 3·E6(q) and E6(q)·3. From the algebraic group perspective, it is less common for E6(q) to refer to the finite simple group, because the latter is not in a natural way the set of points of an algebraic group over Fq unlike E6,sc(q) and E6,ad(q).

Beyond this “split” (or “untwisted”) form of E6, there is also one other form of E6 over the finite field Fq, known as 2E6, which is obtained by twisting by the non-trivial automorphism of the Dynkin diagram of E6. Concretely, 2E6(q), which is known as a Steinberg group, can be seen as the subgroup of E6(q2) fixed by the composition of the non-trivial diagram automorphism and the non-trivial field automorphism of Fq2. Twisting does not change the fact that the algebraic fundamental group of 2E6,ad is Z/3Z, but it does change those q for which the covering of 2E6,ad by 2E6,sc is non-trivial on the Fq-points. Precisely: 2E6,sc(q) is a covering of 2E6(q), and 2E6,ad(q) lies in its automorphism group; when q+1 is not divisible by 3, all three coincide, and otherwise (when q is congruent to 2 mod 3), the degree of 2E6,sc(q) over 2E6(q) is 3 and 2E6(q) is of index 3 in 2E6,ad(q), which explains why 2E6,sc(q) and 2E6,ad(q) are often written as 3·2E6(q) and 2E6(q)·3.

Two notational issues should be raised concerning the groups 2E6(q). One is that this is sometimes written 2E6(q2), a notation which has the advantage of transposing more easily to the Suzuki and Ree groups, but the disadvantage of deviating from the notation for the Fq-points of an algebraic group. Another is that whereas 2E6,sc(q) and 2E6,ad(q) are the Fq-points of an algebraic group, the group in question also depends on q (e.g., the points over Fq2 of the same group are the untwisted E6,sc(q2) and E6,ad(q2)).

The groups E6(q) and 2E6(q) are simple for any q,[4][5] and constitute two of the infinite families in the classification of finite simple groups. Their order is given by the following formula (sequence A008872 in the OEIS): 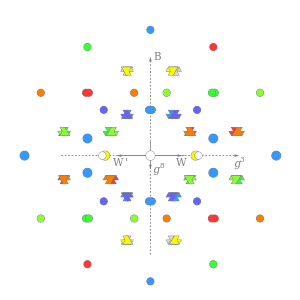 The pattern of weak isospin, W, weaker isospin, W′, strong g3 and g8, and baryon minus lepton, B, charges for particles in the SO(10) Grand Unified Theory, rotated to show the embedding in E6.

In grand unification theories, E6 appears as a possible gauge group which, after its breaking, gives rise to the SU(3) × SU(2) × U(1) gauge group of the standard model (also see Importance in physics of E8). One way of achieving this is through breaking to SO(10) × U(1). The adjoint 78 representation breaks, as explained above, into an adjoint 45, spinor 16 and 16 as well as a singlet of the SO(10) subalgebra. Including the U(1) charge we have

Where the subscript denotes the U(1) charge.

Likewise, the fundamental representation 27 and its conjugate 27 break into a scalar 1, a vector 10 and a spinor, either 16 or 16:

Thus, one can get the Standard Model's elementary fermions and Higgs boson.