Improvisation is broad term referring to the process of devising an atypical method to solving a problem due to lack of time or resources. In a technical context, this can mean adapting a device for some use other than that which it was designed for, or building a device from unusual components in an ad-hoc fashion. Improvisation as a context of performing arts is a very spontaneous performance without specific preparation. The skills of improvisation can apply to many different faculties, across all artistic, scientific, physical, cognitive, academic, and non-academic disciplines.

Improvisation also exists outside the arts. Improvisation in engineering is to solve a problem with the tools and materials immediately at hand. Improvised weapons are often used by guerrillas, insurgents and criminals.

Improvisation in engineering is to solve a problem with the tools and materials immediately at hand. Examples of such improvisation was the re-engineering of carbon dioxide scrubbers with the materials on hand during the Apollo 13 space mission, or the use of a knife in place of a screwdriver to turn a screw. Improvised street bench in Naples (Italy), made from wooden pallet 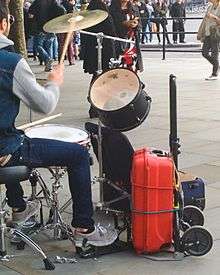 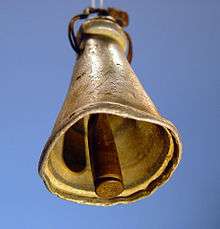 An improvised cowbell, used for sheep or goats. The bell was found in 1988 in a field near Tuqu' (Tekoa) in the Judean hills, the West Bank. The bell's body is made of aluminum, probably a broken kitchen utensil, while the clapper is a brass cartridge case (SMI 25 NATO, probably 7.62×51mm). 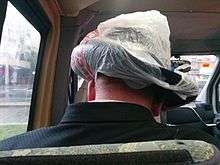 Improvised hat cover of an Orthodox Jew on a rainy day in Tel Aviv.

Engineering improvisations may be needed because of emergencies, embargo, obsolescence of a product and the loss of manufacturer support, or just a lack of funding appropriate for a better solution. Users of motor vehicles in parts of Africa develop improvised solutions where it is not feasible to obtain manufacturer-approved spare parts.

The popular television program MacGyver used as its gimmick a hero who could solve almost any problem with jury rigged devices from everyday materials, a Swiss Army knife and some duct tape.

ComedySportz Austin performing a shortform game based on direction from the audience with the help of Red Dirt Improv; in this case spoofing a hard rock band performing a song made up on the stage

Improvisation can be thought of as an "on the spot" or "off the cuff" spontaneous moment of sudden inventiveness that can just come to mind, body and spirit as an inspiration. No preparation or training is needed. However, improvisation in any life or art form, can occur more often if it is practiced as a way of encouraging creative behavior. That practice includes learning to use one's intuition, as well as learning a technical understanding of the necessary skills and concerns within the domain in which one is improvising. This can be when an individual or group is acting, dancing, singing, playing musical instruments, talking, creating artworks, problem solving, or reacting in the moment and in response to the stimulus of one's immediate environment and inner feelings. This can result in the invention of new thought patterns, new practices, new structures or symbols, and/or new ways to act.

Improvisation was originally rarely used on dramatic television. A major exception was the situation comedy Mork & Mindy where star Robin Williams, famed for this kind of performing, was allotted specific sections in each episode where he was allowed to perform freely.

The skills of improvisation can apply to many different abilities or forms of communication and expression across all artistic, scientific, physical, cognitive, academic, and non-academic disciplines. For example, improvisation can make a significant contribution in music, dance, cooking, presenting a speech, sales, personal or romantic relationships, sports, flower arranging, martial arts, psychotherapy, and much more.

Techniques of improvisation are widely used in training for performing arts or entertainment; for example, music, theatre and dance. To "extemporize" or "ad lib" is basically the same as improvising. Colloquial terms such as "let's play it by the ear", "take it as it comes", and "make it up as we go along" are all used to describe "improvisation".

The simple act of speaking requires a good deal of improvisation because the mind is addressing its own thought and creating its unrehearsed delivery in words, sounds and gestures, forming unpredictable statements that feed back into the thought process (the performer as listener), creating an enriched process that is not unlike instantaneous composition [with a given set or repertoire of elements].[1]

Where the improvisation is intended to solve a problem on a temporary basis, the "proper" solution being unavailable at the time, it may be known as a "stop-gap". This applies to the field of engineering. Another improvisational, group problem-solving technique being used in organizations of all kinds is brainstorming, in which any and all ideas that a group member may have are permitted and encouraged to be expressed, regardless of actual practicality. As in all improvisation, the process of brainstorming opens up the minds of the people involved to new, unexpected and possibly useful ideas. The colloquial term for this is "thinking outside the box."

Improvisation is usually defined as the composition of music while simultaneously singing or playing an instrument. In other words, the art of improvisation can be understood as composing music "on the fly". Improvisation can take place as a solo performance, or interdependently in ensemble with other players. When done well, it often elicits gratifying emotional responses from the audience. One notable improvisational pianist is Franz Liszt. The origins of Liszt's improvisation in an earlier tradition of playing variations on a theme were mastered and epitomized by Johann Sebastian Bach, Wolfgang Amadeus Mozart, and Ludwig van Beethoven.

Improvised freestyle rap is commonly practiced as a part of rappers' creative processes, as a "finished product" for release on recordings (when the improvisation is judged good enough), as a spiritual event, as a means of verbal combat in battle rap, and, simply, for fun. It often incorporates insults similar to those in the African-American game The Dozens, and complex rhythmic and sometimes melodic forms comparable to those heard in jazz improvisation.

In the realm of silent film music, there are also a small number of musicians whose work has been recognized as exceptional by critics, scholars and audiences alike; these include Neil Brand and John Sweeney, among others who are all performers at "Le Giornate del Cinema Muto", the annual conference on silent film in Pordenone, Italy. Their performances must match the style and pacing of those films which they accompany and the knowledge of a wide range of musical styles is required, as well as the stamina to play for films which occasionally run more than three hours in length, without a pause.

The Ligue d'improvisation montréalaise (LIM) is a league of improvisational theatre based in Montreal, Quebec, Canada

Improvisational comedy is a theatre art performed throughout the world and has had on-again, off-again status throughout history.

Contact improvisation: a form developed in 1973, that is now practiced around the world. Contact improvisation originated from the movement studies of Steve Paxton in the 1970s and developed through the continued exploration of the Judson Dance Theater. It is a dance form based on weight sharing, partnering, playing with weight, exploring negative space and unpredictable outcomes.

Sculpture often relies on the enlargement of a small model or maquette to create the final work in a chosen material. Where the material is plastic such as clay, a working structure or armature often needs to be built to allow the pre-determined design to be realized. Alan Thornhill's method for working with clay abandons the maquette,[2] seeing it as ultimately deadening to creativity.[3] Without the restrictions of the armature, a clay matrix of elements allows that when recognisable forms start to emerge, they can be essentially disregarded by turning the work, allowing for infinite possibility and the chance for the unforeseen to emerge more powerfully at a later stage.

Moving from adding and taking away to purely reductive working, the architectural considerations of turning the work are eased considerably but continued removal of material through the rejection of forms deemed too obvious can mean one ends up with nothing. Former pupil Jon Edgar uses Thornhill's method as a creative extension to direct carving in stone and wood.

The director Mike Leigh uses lengthy improvisations developed over a period of weeks to build characters and story lines for his films. He starts with some sketch ideas of how he thinks things might develop but does not reveal all his intentions with the cast who discover their fate and act out their responses as their destinies are gradually revealed, including significant aspects of their lives which will not subsequently be shown onscreen. The final filming draws on dialogue and actions that have been recorded during the improvisation period.

The film company ACT 2 CAM uses improvisation to create the characters, contexts and plot for their films. Improvisation also forms a large part of the final filmed product.

Improvisational writing is an exercise that imposes limitations on a writer such as a time limit, word limit, a specific topic, or rules on what can be written. This forces the writer to work within stream of consciousness and write without judgment of the work they produce. This technique is used for a variety of reasons, such as to bypass writer's block, improve creativity, strengthen one's writing instinct and enhance one's flexibility in writing.

Some improvisational writing is collaborative, focusing on an almost dadaist form of collaborative fiction. This can take a variety of forms, from as basic as passing a notebook around a circle of writers with each writing a sentence, to coded environments that focus on collaborative novel-writing,[4] like OtherSpace.[5] 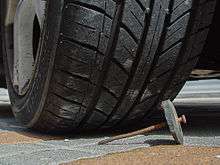 Improvised weapons are often used by guerrillas, insurgents and criminals as conventional weapons may be unavailable. Such weapons vary in sophistication from simple sharpened sticks, to petrol bombs and homemade napalm, to IEDs and makeshift bomber aircraft. Weapons are also improvised by regular military organizations and formations as "stop-gap" measures when purpose-built equipment is either not on hand or is simply not yet available.