Bailey was born in Sheffield, England. A third-generation musician,[2] he began playing the guitar at the age of ten, initially studying music with his teacher and Sheffield City organist C. H. C. Biltcliffe, an experience that he did not enjoy,[3] and guitar with his uncle George Wing and John Duarte.[2] As an adult he worked as a guitarist and session musician in clubs, radio, dance hall bands, and so on, playing with many performers including Morecambe and Wise, Gracie Fields, Bob Monkhouse and Kathy Kirby, and on television programs such as Opportunity Knocks. Bailey's earliest foray into 'what could be called free improvised music' was in 1953 with two other guitarists in their shared flat in Glasgow.[4] He was also part of a Sheffield-based trio founded in 1963 with Tony Oxley and Gavin Bryars called "Joseph Holbrooke" (named after the composer, whose work they never actually played). Although originally performing relatively "conventional" modal, harmonic jazz this group became increasingly free in direction.[5]

Bailey moved to London in 1966, frequenting the Little Theatre Club run by drummer John Stevens. Here he met many other like-minded musicians, such as saxophonist Evan Parker, trumpet player Kenny Wheeler and double bass player Dave Holland. These players often collaborated under the umbrella name of the Spontaneous Music Ensemble, recording the seminal album Karyobin for Island Records in 1968. In this year Bailey also formed the Music Improvisation Company with Parker, percussionist Jamie Muir and Hugh Davies on homemade electronics, a project that continued until 1971. He was also a member of the Jazz Composer's Orchestra and Iskra 1903, a trio with double-bass player Barry Guy and tromboneist Paul Rutherford that was named after a newspaper published by the Russian revolutionary Vladimir Lenin.[6]

In 1970, Bailey founded the record label Incus with Tony Oxley, Evan Parker and Michael Walters. It proved influential as the first musician-owned independent label in the UK. Oxley and Walters left early on; Parker and Bailey continued as co-directors until the mid-1980s, when friction between the men led to Parker's departure. Bailey continued the label with his partner Karen Brookman until his death in 2005.

Along with a number of other musicians, Bailey was a co-founder of Musics magazine in 1975. This was described as "an impromental experivisation arts magazine" [7] and circulated through a network of like-minded record shops, arguably becoming one of the most significant jazz publications of the second half of the 1970s, and instrumental in the foundation of the London Musicians Collective.

In 1980, he wrote the book Improvisation: Its Nature and Practice. This was adapted by UK's Channel 4 into a four-part TV series in the early '90s, edited and narrated by Bailey.

Bailey died in London on Christmas Day, 2005. He had been suffering from motor neurone disease. 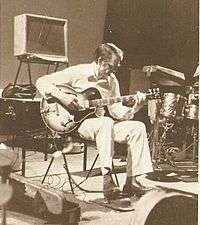 For listeners unfamiliar with experimental music, Bailey's distinctive style can be challenging. Its most noticeable feature is what appears to be its extreme discontinuity, often from note to note: there may be enormous intervals between consecutive notes, and rather than aspiring to the consistency of timbre typical of most guitar-playing, Bailey interrupts it as much as possible: four consecutive notes, for instance, may be played on an open string, a fretted string, via harmonics, and using a nonstandard technique such as scraping the string with the pick or plucking below the bridge. Many of the key features of his music—radical discontinuity, the self-contained brevity of each gesture, an attraction to wide intervals—owe much to Bailey's early fascination with Anton Webern, an influence most audible on Bailey's earliest available recordings, Pieces for Guitar (1966–67, issued on Tzadik).

Playing both acoustic and electric guitars (although more usually the latter), Bailey was able to extend the possibilities of the instrument in radical ways, obtaining a far wider array of sounds than are usually heard. He explored the full vocabulary of the instrument, producing timbres and tones ranging from the most delicate tinklings to fierce noise attacks. (The sounds he produced have been compared to those made by John Cage's prepared piano.) Typically, he played a conventional instrument, in standard tuning, but his use of amplification was often crucial. In the 1970s, for instance, his standard set-up involved two independently controlled amplifiers to give a stereo effect onstage, and he often would use the swell pedal to counteract the "normal" attack and decay of notes. He also made highly original use of feedback, a technique demonstrated on the album String Theory (Paratactile, 2000). Throughout both his commercial and improvising careers his principal "working guitar" was a 1963 Gibson ES 175 model, serial number 120592.[8]

Although Bailey occasionally made use of prepared guitar in the 1970s (he would, for example, put paper clips on the strings, wrap his instruments in chains, or add further strings to the guitar), often for Dadaist/theatrical effect, by the end of that decade he had, in his own words, "dumped" such methods.[9] Bailey argued that his approach to music-making was actually far more orthodox than performers such as Keith Rowe of the improvising collective AMM, who treats the guitar purely as a "sound source" rather than as a musical instrument. Instead, Bailey preferred to "look for whatever 'effects' I might need through technique".[9]

Eschewing labels such as "jazz" (even "free jazz"), Bailey described his music as "non-idiomatic", a label that has been much debated. In the second edition of his book, Improvisation..., Bailey indicated that he felt that free improvisation was no longer "non-idiomatic" in his sense of the word, as it had become a recognizable genre and musical style itself. Bailey frequently sought performance contexts that would provide new stimulations and challenge that would prove musically "interesting", as he often put it. This led to work with collaborators from highly varied fields: players as diverse as Pat Metheny, John Zorn, Lee Konitz, David Sylvian, Cyro Baptista, Cecil Taylor, Keiji Haino, tap dancer Will Gaines, Drum 'n' Bass DJ Ninj, Susie Ibarra, Thurston Moore of Sonic Youth and the Japanese noise rock group Ruins. In fact, despite often performing and recording in a solo context, he was far more interested in the dynamics and challenges of working with other musicians, especially those who did not necessarily share his own approach. As he put it in a March 2002 article of Jazziz:

There has to be some degree, not just of unfamiliarity, but incompatibility [with a partner]. Otherwise, what are you improvising for? What are you improvising with or around? You've got to find somewhere where you can work. If there are no difficulties, it seems to me that there's pretty much no point in playing. I find that the things that excite me are trying to make something work. And when it does work, it's the most fantastic thing. Maybe the most obvious analogy would be the grit that produces the pearl in an oyster, or some shit like that.[10]

Bailey was also known for his dry sense of humour. In 1977, Musics magazine sent the question "What happens to time-awareness during improvisation?" to about thirty musicians associated with the free improvisation scene. The answers received varied from lengthy and highly theoretical essays to more direct comments. Typically pithy was Bailey's reply: "The ticks turn into tocks and the tocks turn into ticks."[11]

Mirakle, a 1999 recording released in 2000, shows Bailey moving into the free funk genre performing with Jamaaladeen Tacuma and Calvin Weston. Carpal Tunnel, the last record to be released during his lifetime, documented his personal struggles to come to terms with the development of Carpal Tunnel Syndrome in his right hand, which had rendered him unable to grip a plectrum (and in fact marked the onset of his motor neurone disease (known as Lou Gehrig's disease (ALS) in North America)). Characteristically, he refused invasive surgery to treat his condition, instead being more "interested in finding ways to work around" this limitation. He chose to "relearn" guitar playing techniques by utilising his right thumb and index fingers to pluck the strings.

With the Spontaneous Music Ensemble