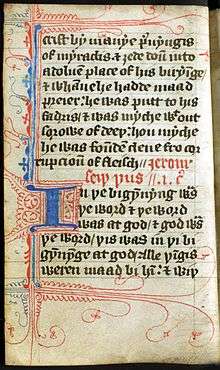 A 14th century, pocket sized copy of the Gospel of John

Inaugurated eschatology is the belief in Christian theology that the end times were inaugurated in the life, death and resurrection of Jesus, and thus there are both "already" and "not yet" aspects to the Kingdom of God. George Eldon Ladd suggests that the Kingdom of God is "not only an eschatological gift belonging to the Age to Come; it is also a gift to be received in the old aeon."[1]

The pioneer of this approach to eschatology was Oscar Cullmann who sought to combine the "thorough-going eschatology" of Albert Schweitzer with the "realized eschatology" of C. H. Dodd.[2] Cullmann suggested the analogy of D Day and V Day to illustrate the relationship between Jesus' death and resurrection on the one hand, and his parousia on the other.[3]

D. A. Carson sees John 5:24 ("whoever hears my word and believes him who sent me has eternal life and will not be condemned; he has crossed over from death to life", NIV) as giving the "strongest affirmation of inaugurated eschatology in the Fourth Gospel": it is not necessary for the believer to "wait until the last day to experience something of resurrection life."[5]