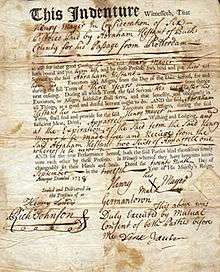 An indenture signed by Henry Mayer, with an "X", in 1738. This contract bound Mayer to Abraham Hestant of Bucks County, Pennsylvania, who had paid for Mayer to travel from Europe.

An indentured servant or indentured labor is an employee (indenturee) within a system of unfree labor who is bound by a contract (indenture) to work for a particular employer for a fixed period of time. The employer is often permitted to assign the labor of an indenturee to a third party. Indenturees usually enter into an indenture for a specific payment or other benefit or to meet a legal obligation, such as debt bondage. Upon completion of the contract, indentured servants were granted freedom or occasionally plots of land. In many countries, systems of indentured labor have been outlawed.

Until the late 18th century, indentured servitude was very common in British North America. It was often a way for poor Europeans to emigrate to the American colonies: they signed an indenture in return for a passage. After their indenture expired, the immigrants were free to work for themselves or another employer.

In some cases, the indenture was made with a ship's master, who on-sold the indenture to an employer in the colonies. Most indentured servants worked as farm laborers or domestic servants, although some were apprenticed to craftsmen.

The terms of an indenture were not always enforced by American courts, although runaways were usually sought out and returned to their employer.

Between one-half and two-thirds of white immigrants to the American colonies between the 1630s and American Revolution had come under indentures.[1] However, while almost half the European immigrants to the Thirteen Colonies were indentured servants, at any one time they were outnumbered by workers who had never been indentured, or whose indenture had expired, and thus free wage labor was the more prevalent for Europeans in the colonies.[2] Indentured people were numerically important mostly in the region from Virginia north to New Jersey. Other colonies saw far fewer of them. The total number of European immigrants to all 13 colonies before 1775 was about 500,000; of these 55,000 were involuntary prisoners. Another 300,000 were African victims of the Atlantic slave trade. Of the 450,000 or so European arrivals who came voluntarily, Tomlins estimates that 48% were indentured.[3] About 75% of these were under the age of 25. The age of adulthood for men was 24 years (not 21); those over 24 generally came on contracts lasting about 3 years.[4] Regarding the children who came, Gary Nash reports that "many of the servants were actually nephews, nieces, cousins and children of friends of emigrating Englishmen, who paid their passage in return for their labor once in America."[5]

Not all European servants were sent willingly. Several instances of kidnapping for transportation to the Americas are recorded. An illustrative example is that of Peter Williamson (1730–1799). As historian Richard Hofstadter pointed out, "Although efforts were made to regulate or check their activities, and they diminished in importance in the eighteenth century, it remains true that a certain small part of the white colonial population of America was brought by force, and a much larger portion came in response to deceit and misrepresentation on the part of the spirits [recruiting agents]."[6] One "spirit" named William Thiene was known to have spirited away[7] 840 people from Britain to the colonies in a single year.[8] Historian Lerone Bennett, Jr. notes that "Masters given to flogging often did not care whether their victims were black or white."[9]

Indentured servants could not marry without the permission of their master, were subject to physical punishment (like many young ordinary servants), and saw their obligation to labor enforced by the courts. To ensure uninterrupted work by the female servants, the law lengthened the term of their indenture if they became pregnant. But unlike slaves, servants were guaranteed to be eventually released from bondage. At the end of their term they received a payment known as "freedom dues" and became free members of society.[10] One could buy and sell indentured servants' contracts, and the right to their labor would change hands, but not the person as a piece of property.

The American Revolution severely limited immigration to the United States. But economic historians differ on the long-term impact of the Revolution. Sharon Salinger argues that the economic crisis which followed the war made long-term labor contracts unattractive. His analysis of Philadelphia's population shows how the percentage of bound citizens fell from 17% to 6.4% over the course of the war.[11] William Miller posits a more moderate theory, stating that "the Revolution (…) wrought disturbances upon white servitude. But these were temporary rather than lasting".[12] David Galenson supports this theory by proposing that the numbers of British indentured servants never recovered, and that Europeans from other nationalities replaced them.[13]

Several Acts passed by the American and British governments fostered the decline of indentures. The Passenger Vessels Act 1803, an Act of the UK Parliament which regulated travel conditions aboard ships, attempted to make transportation more expensive so as to hinder landlords' tenants seeking a better life. The American abolition of imprisonment of debtors by federal law (passed in 1833) made prosecution of runaway servants more difficult, increasing the risk of indenture contract purchases. The 13th Amendment passed in the wake of the American Civil War has made indentured servants illegal in the United States.

Through its introduction and through the 18th century, the details regarding indentured labor varied across import and export regions; however, most overseas contracts were made on immigrant soil under the idea that prospective immigrants were competent enough to make overseas contracts on their own account and many of them would not take the risk to immigrate first without such contracts.[14]

A half million Europeans went as indentured servants to the Caribbean (primarily the south Caribbean, Trinidad and Tobago, French Guiana, and Suriname) before 1840.[15][16]

Production of sugar in these areas was primarily driven by indentured immigrant labor. The success and vitality of these plantations were heavily dependent upon the indentured labor system.[17] Though cocoa production and gold mining were labor-intensive, sugar was the dominant industry that depended on bound immigrant labor.[14]

Indentured servitude was a common part of the social landscape in England and Ireland during the 17th century. During the 17th century, many Irish were also taken to Barbados. In 1643, there were 37,200 whites[18] in Barbados (86% of the population).[19] During the Wars of the Three Kingdoms many Scottish and Irish prisoners of war were transported as indentured laborers to the colonies.[20]

There were also reports of kidnappings of youngsters to work as servants. During the late 17th and early 18th centuries, children from England and France were kidnapped and sold into indentured labor in the Caribbean for a minimum of five years, but usually their contracts were bought and sold repeatedly and some laborers never obtained their freedom.[21]

Convicts transported to the Australian colonies before the 1840s often found themselves hired out in a form of indentured labor.[22] Indentured servants also emigrated to New South Wales.[23] The Van Diemen's Land Company used skilled indentured labor for periods of seven years or less.[24] A similar scheme for the Swan River area of Western Australia existed between 1829 and 1832.[25]

During the 1860s planters in Australia, Fiji, New Caledonia, and the Samoa Islands, in need of laborers, encouraged a trade in long-term indentured labor called "blackbirding". At the height of the labor trade, more than one-half the adult male population of several of the islands worked abroad.

Over a period of 40 years, from the mid-19th century to the early 20th century, labor for the sugar-cane fields of Queensland, Australia included an element of coercive recruitment and indentured servitude of the 62,000 South Sea Islanders. The workers came mainly from Melanesia – mainly from the Solomon Islands and Vanuatu – with a small number from Polynesian and Micronesian areas such as Samoa, the Gilbert Islands (subsequently known as Kiribati) and the Ellice Islands (subsequently known as Tuvalu). They became collectively known as "Kanakas".

It remains unknown how many Islanders the trade controversially kidnapped (or blackbirded). Whether the system legally recruited Islanders, persuaded, deceived, coerced or forced them to leave their homes and travel by ship to Queensland remains difficult to determine. Official documents and accounts from the period often conflict with the oral tradition passed down to the descendants of workers. Stories of blatantly violent kidnapping tend to relate to the first 10–15 years of the trade.

Australia deported many of these Islanders to their places of origin in the period 1906–1908 under the provisions of the Pacific Island Labourers Act 1901.[26]

Australia's own colonies of Papua and New Guinea (joined after the Second World War to form Papua New Guinea) were the last jurisdictions in the world to use indentured servitude.

A significant number of construction projects, principally British, in East Africa and South Africa, required vast quantities of labor, exceeding the availability or willingness of local tribesmen. Coolies from India were imported, frequently under indenture, for such projects as the Uganda Railway, as farm labor, and as miners. They and their descendants formed a significant portion of the population and economy of Kenya and Uganda, although not without engendering resentment from others. Idi Amin's expulsion of the "Asians" from Uganda in 1972 was an expulsion of Indo-Africans.[27]

The majority of the population of Mauritius are descendants of Indian indentured labourers brought in between 1834 and 1921. Initially brought in to work the sugar estates following the abolition of slavery in the British Empire an estimated half a million indentured laboureres were present on the island during this period. Aapravasi Ghat, in the bay at Port Louis and now a UNESCO site, was the first British colony to serve as a major reception centre for slaves and indentured servants for British plantation labour.[28]

The Universal Declaration of Human Rights (adopted by the United Nations General Assembly in 1948) declares in Article 4 "No one shall be held in slavery or servitude; slavery and the slave trade shall be prohibited in all their forms".[29] More specifically, It is dealt with by article 1(a) of the United Nations 1956 Supplementary Convention on the Abolition of Slavery.

However, only national legislation can establish the unlawfulness of indentured labor in a specific jurisdiction. In the United States, the Victims of Trafficking and Violence Protection Act (VTVPA) of 2000 extended servitude to cover peonage as well as Involuntary Servitude.[30]