For other uses, see Kanaka (disambiguation). 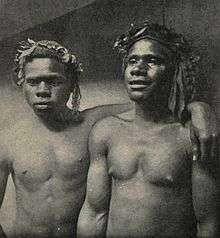 Loyalty Islanders employed as sailors on the New Caledonian coast

Kanakas were workers from various Pacific Islands employed in British colonies, such as British Columbia (Canada), Fiji and Queensland (Australia) in the 19th and early 20th centuries. They also worked in California and Chile (see Easter Island and Rapanui people as related subjects).

"Kanaka", sometimes used as a derogatory name,[1] originally referred only to native Hawaiians, called kānaka ʻōiwi or kānaka maoli in the Hawaiʻian language. Until 2009, several rough translations of the word "Kanak" were admitted: "man", "animal man ", and "wild man" were the most used. In its resolution n°5195, the Academy of the Polynesian languages Pa' umotu specified a definition more faithful to the primal Polynesian language Mamaka Kaïo of origin, that of "free man". 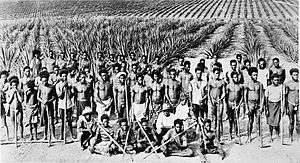 According to the Macquarie Dictionary, the word "kanaka", which was once widely used in Australia, is now regarded in Australian English as an offensive term for a Pacific Islander.[2] In part, this is because most "Kanakas" in Australia were people from Melanesia, rather than Polynesia, and included few Hawaiians. The descendants of 19th century immigrants to Australia from the Pacific Islands now generally refer to themselves as "South Sea Islanders", and this is also the term used in formal and official situations.

Most of the original labourers were recruited from the Solomon Islands and New Hebrides (Vanuatu), though others were taken from the Loyalty Islands, Tonga, Samoa, Kiribati and Tuvalu. Some were kidnapped ("blackbirded") or otherwise induced into long-term indentured service.

Reflecting European prejudices of the time, the men were generally referred to as "Kanakas". Islander descendants regard this term as a pejorative and insulting reminder of their ancestors' exploitation at the hands of white planters and their recruiters. In Australia, South Sea Islanders were often unfree labour, of the specific form known as indentured labour. It is often alleged that their employment in Australia was a form of slavery, due to the belief that many people were recruited by "blackbirding", as the enslavement of Pacific Islanders and indigenous Australians was known at the time.

Of the more than 60,000 Islanders recruited from 1863, the majority were to be "repatriated" (that is, deported) by the Australian Government between 1906 and 1908 under the Pacific Island Labourers Act 1901[3] legislation prompted by the White Australia policy. Some were exempted on various grounds, including marriage to Australians. These and others who escaped deportation remained in Australia and their descendants today form Australia's largest Melano-Polynesian ethnic group. Many Australian South Sea Islanders are also of mixed ancestry, including Aboriginal and Torres Strait Islander people for whom they are often mistaken. In consequence, Australian South Sea Islanders have faced similar forms of discrimination meted out to Aborigines and Torres Strait Islanders.

The Australian South Sea Islander community was recognised as a unique minority group in 1994 after a report by the Human Rights and Equal Opportunity Commission found they had become more disadvantaged than the indigenous Australians. 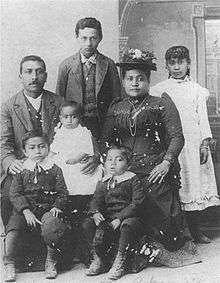 In Canada, many Kanaka men married First Nations women,[4] and their descendants can still be found in British Columbia and neighbouring parts of Canada and the United States (the states of Washington and Oregon). Canadian Kanakas were all Hawaiian in origin. Nearly all were contractees of the Hudson's Bay Company although some had arrived in the area as ship's hands or, in some cases, migrated north from California. There was no negative connotation to the use of Kanaka in British Columbian and Californian English of the time, and in its most usual sense today means someone of Hawaiian ethnic inheritance, without any derisive sense. Kanakas had been aboard the first exploration and trading ships to reach the Pacific Northwest Coast and there were cases of Kanakas living amongst various First Nations peoples after jumping ship as well as often along on the fur brigades and Express of the fur companies, as well as in the life of the fort. Kanaka Creek, British Columbia was a community of mixed Hawaiian-First families established across the Fraser River from Fort Langley in the 1830s and remains on the map today. Kanakas were active in both the California Gold Rush and in the Fraser Canyon Gold Rush and other rushes. Kanaka Bar, British Columbia gets its name from claims staked and worked by Kanakas who had been previously working for the fur company (which today is a First Nations community of the Nlaka'pamux people).

One linguist holds that Canuck, a nickname for Canadians, is derived from the Hawaiian Kanaka.[5]

As early as the 1820s, native workers from the Sandwich Islands were employed in the kitchen and other skilled trades by the Hudson's Bay Company at Fort Vancouver, mostly living south and west of the main palisade in an area known as "Kanaka Village." Kanakas, as Native Hawaiian workers employed in agriculture and ranching, were present in the mainland United States (primarily in California under Spanish colonial arrangement and later American company contracts) as early as 1834 (Ricard Henry Dana refers to manual laborers on the Californian coast as "Kanakas" in Two Years Before the Mast), but their migration peaked between 1900 and 1930. Most of their families present in the fields soon blended by intermarriage into the Chinese, Filipino, and more numerous Mexican populations with whom they came in contact. Native Hawaiians harvested sugar beets and picked apples at one point in the states of Washington and Oregon. They people have left a legacy in Oregon place names, such as Kanaka Flat in Jacksonville, and the Owyhee River in southeastern Oregon (Owyhee is an archaic spelling of Hawaii).[6][7] There is also documentation of the presence of several hundred Native Hawaiian paniolos or cowboys across the Great Basin of the Western US. Kanakas were also mentioned in the book Two Years before the Mast by Richard Henry Dana (1840) who worked alongside him during his sea voyage from Boston to Cape Horn.