For other uses, see Inn (disambiguation). 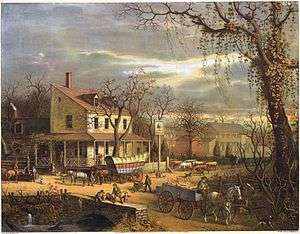 American scenery—the inn on the roadside (1872)

Inns are generally establishments or buildings where travelers can seek lodging and, usually, food and drink. They are typically located in the country or along a highway; before the advent of motorized transportation they also provided accommodation for horses. 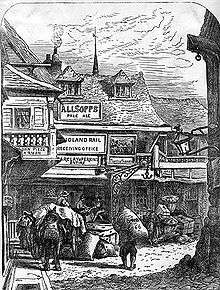 The Tabard Inn, Southwark, London, around 1850

Facade of the Sultanhani caravanserai in Turkey

Inns in Europe were possibly first established when the Romans built their system of Roman roads two millennia ago. Some inns in Europe are several centuries old. In addition to providing for the needs of travelers, inns traditionally acted as community gathering places.

Historically, inns in Europe provided not only food and lodging, but also stabling and fodder for the travelers' horses. Famous London examples of inns include the George and the Tabard. There is however no longer a formal distinction between an inn and other kinds of establishment. Many pubs use the name "inn", either because they are long established and may have been formerly coaching inns, or to summon up a particular kind of image.

Inns were like bed and breakfasts, with a community dining room which was also used for town meetings or rented for wedding parties. The front, facing the road was ornamental and welcoming for travelers. The back also usually had at least one livery barn for travelers to keep their horses. There were not lobbies as in modern inns; but the innkeeper would answer the door for each visitor and judge the people whom he decided to allow to come in. Many inns were simply large estates that had extra rooms for renting.

During the 19th century the inn played a major role in the growing transportation system of England. Industry was on the rise and people were traveling more in order to keep and maintain business. The English Inn was considered an important part of English infrastructure as it helped maintain a smooth flow of travel throughout the country.[1]

As modes of transport have evolved, tourist lodging has adapted to serve each generation of traveller. A stagecoach made frequent stops at roadside coaching inns for water, food and horses. A passenger train stops only at designated stations in the city centre, around which were built grand railway hotels. Motorcar traffic on old-style two-lane highways may pause at any camp, cabin court or motel along the way, while freeway traffic is restricted to access from designated off-ramps to side roads which quickly become crowded with hotel chain operators.

The original functions of an inn are now usually split among separate establishments, such as hotels, lodges, and motels, all of which might provide the traditional functions of an inn but which focus more on lodging customers than on other services; public houses, which are primarily alcohol-serving establishments; and restaurants and taverns, which serve food and drink. (Hotels often contain restaurants serving full breakfasts and meals, thus providing all of the functions of traditional inns. Economy, limited service properties, however, claim at most an included continental breakfast as there is no kitchen and no bar.)

The lodging aspect of the word inn lives on in hotel brand names like Holiday Inn, and in some laws that refer to lodging operators as innkeepers. The Inns of Court in London were once accommodations for members of the legal profession.

Other forms of inn exist throughout the world. Among them are the honjin and ryokan of Japan, and caravanserai of the Ottoman Empire.

In Asia Minor, during the periods of rule by the Seljuq and Ottoman Turks, impressive structures functioning as inns (Turkish: han) were built because it was thought that inns were socially significant. These inns provided accommodation for people and their vehicles or animals and served as a resting place for people, whether travelling on foot or by other means.

These inns were built between towns if the distance between them was too far for one day's travel. These structures were called caravansarais which were inns with large courtyards with ample supplies of water for both drinking and other uses. They would also routinely contain a café in addition to supplies of food and fodder. After the caravans traveled a while they would take a break at these caravansarais, and spend the night there to rest both themselves and their animals.

Usage of the term

The term "inn" historically characterized a rural hotel which provided lodging, food and refreshments, and accommodations for travelers' horses. To capitalize on this nostalgic image many typically lower end and middling modern motor hotel operators seek to distance themselves from similar motels by styling themselves "inns", regardless of services and accommodations provided. Examples are Premier Inn, Holiday Inn, Comfort Inn, Days Inn and Knights Inn.

The term inn is also retained in its historic use in many laws governing motels and hotels, often known as "Innkeeper's Acts".[2] or refer to hôteliers and motel operators as "innkeepers" in the body of the legislation[3][4] These laws typically define the innkeepers' liability for valuables entrusted to them by clients and determine whether an innkeeper holds any lien against such goods. In some jurisdictions, an offence named as "defrauding an innkeeper" prohibits fraudulently obtaining "food, lodging, or other accommodation at any hotel, inn, boarding house, or eating house";[5] in this context, the term is often an anachronism as the majority of modern restaurants are free-standing and not attached to coaching inns or tourist lodging.